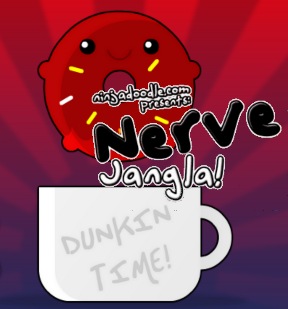 Hey, you. What're you doing right now?... WRONG. You're about to play NerveJangla from Ninjadoodle. Given the title, you might be expecting some sort of reflex testing twitch game. Wrong again! NerveJangla is actually a series of puzzles and minigames that are about as threatening as a newborn bunny nestled in a pile of cotton balls. The goal is to solve each screen in the least amount of time as possible. At the end, you may think you have a high score, when in reality, you're wrong again, because however fast your time, I assure you, mine is much faster!... what?... proof?... uh, my cat ate my screenshot. Leave me alone!

While there are a few stages that require you to move quickly, for the most part you're solving a series of simple logic puzzles. Read the directions, use your mouse to interact, and experiment. You may be called upon to help a fat ninja collect his stars (oooh!), or to identify identical Russian nesting dolls (aaah!), or perhaps even to unite a cactus and a balloon (zounds!).

It's not particularly challenging, and some of the puzzles that reoccur are definitely more enjoyable than others, while some are simply small variations of one another. The game is surprisingly long for what it is, but still basically just a coffee break activity. But it's simple, it's cute, and sometimes a bouncy jazz soundtrack is exactly what you need to get you through the day. And sometimes, a happy donut is all you really need to put a smile on your face, right? WRONG!... oh, uh, sorry. Force of habit.

Great game. After many replays I've managed to get it done in under 150 seconds. My favorite in the series of these types of games by Ninjadoodle.

I'm having a dense moment I think... I totally don't get the "I feel so alone" 1 level where the letters at the bottom change between mno... any help?

What's it a picture of?

Try spelling it out.

Actually, the one MightSeriouslyBeCrazy is describing is

Arrgh, I'm stuck on the star + star combination! Can someone give me a hint please?

Wait.. I figured it. So obvious now.

What do those colors combine into?

I'm stuck on one of the yin to yang levels, the one where

you have to drag the black bar that says yin to yang down, and the column in the middle falls on top of it. I can't seem to drop it and get the ball under before the column drops, and you can't get it over the top of the column either =s

The level is possible because I happened to get it through. Maybe try disabling your mouse acceleration (control panel) so it's easier to quickly and precisely control the mouse pointer.

Or, if you want to cheat,

Don't worry about the wall.

While dragging the black ball, right-click to bring up the Flash Player menu. Then left-click on the *other* side of the wall. Booya.

@BlueTaslem -- That's wild... in three playthroughs I only ever got the

one. Thanks for the correction!

Appears not to work in Firefox.

[The game does indeed work in Firefox. Check your Flash Player plug-in. -Jay]

i could not get past the last maze towards the end. it's hard keeping a steady hand on this game at times. But anyway,other then that,not a bad game.

I thought this was very refreshing. A couple stages were especially clever. :)

I'm stuck on a Yin 2 Yang level - the one after the level where you drop the floor and quickly zip the yin across to the right.
The level on which I'm stuck, I can only move the Yin but there seem to be no other clickable places...
Besides which, I'm thoroughly enjoying the game, as much as all the other Ninja Doodle games I've played.

argh!!! im stuck on the star color combination!!! how can i pass this level??? Can anyone help me???

ARGH. I was enjoying it until the Yin/Yang track pad torture test. Couldn't get the cheat to work, either, though I appreciate the help, -js.

I like the Hoshi Saga approach: You might not get to play the bonus levels but at least you're not stopped dead. Oh well. Next!

This is especially for the last one. Don't worry too much about the reverse maze stuff! Position it to where it WILL say "Now this." Shoot. Now the "Now this" will appear. Take your mouse slowly over to the other side of the maze. Tada, the cursor is at "now this"! It's all in the mind ;)

Click on the ninja and HOLD! For about 5 seconds, then let go. TADA!

Help! I can't get past the fertilize level. All I can do is make the little bird take off. ???

On the spelling levels it depends on the picture.
On the 1st one: Angel:GOD Dog:DOG
On the 2nd one: 1:MONO Moon:MOON

[Fixed. Thanks for the walkthrough! :) -Jay]

@ Chiktionary, I'm stuck there too! How did you do it?

bah, i was enjoying this game until the yin yang trackpad torture speed test previously mentioned. can't pass it, and cheat doesn't work for me either.

i thought this was a brain game, not a mouse supremacy demo.

how to get the reward? i like collecting rewards..