It's baa-aack. Nekra Psaria 2 is the sequel to DrawManEater's Nekra Psaria, and fans of the original will be pleased to note that it looks every bit like the horrifying baby of Dr. Seuss and your nightmares as the first one did. When we last left Johnny-boy, the protagonist of this surreal escape game series, he'd successfully fed his giant talking head of a generator and managed to get his power online for some quality vegetating in front of the TV... only to be suddenly surrounded by vegetation, in the heart of a mysterious forest, with ominous forces on his tail. Now he's woken up in an underground cell, and he'll have to traverse the eerie woods... and caverns... and dubious underground laboratories in order to find his way home. What's a guy gotta do to channel flip in peace, huh? Point-and-click his way through one of the most entertainingly unsettling worlds in escape games, apparently! 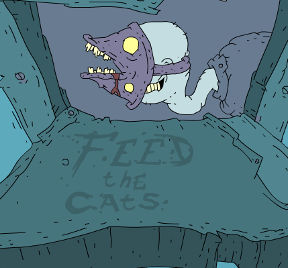 The Nekra Psaria games bill themselves as escape games, but with their huge, labyrinthine environments, they're really more like walking tours through an exceptionally surreal theme park. The visuals are eye-catching and bizarre, and even the puzzles tend to follow a more dreamlike logic. They're not too difficult to decipher, though, thanks to the game's excellent sense of conveyance... all areas you can interact with are highlighted with a yellow glow whenever you mouse over them. When it comes to using items, you don't need to hunt for hotspots, either... as long as you're in the right scene, clicking on the right item in your inventory will automatically use it wherever it's necessary. The large size of the world does mean it's possible to get lost, though, and the bizarre puzzles can be a roadblock if you can't get in tune with the game's dreamy logic. Conversely, if you do grok it, it's almost too easy and short. But the real fun of Nekra Psaria 2 lies in letting it take you for a ride. It's a big, strange world, intentionally "ugly" in a way that's incredibly visually appealing, full of feverish weirdos, and just when you think you've seen it all, it goes and gets stranger on you. Check your sanity at the door with the fish-faced man, and get ready for weird.

Well, that was nice! I managed without a walkthrough, like the first one.
It's got a pretty good amount of places to go, and they're all equally nice-disturbing.

cloud and a bird tied with string.

What do I do with these?

Awesome! I got a real early-Submachine vibe to it. Only place I was stuck was a space in which it wasn't obvious that object(s) would fit. More birdy than fishy.

Got really stuck once, I'm sure others will have the same problem. Some help for those that do:

I got stuck only once when I had a round swirly thing and a tied up bird.

The round item with the swirl in the middle is an eyeball. use it at the scanner, back up a frame, and the door will be open.

Just finished both parts with no walkthrough. Cool.
I really loved how even though the art style is surreal, the puzzles and progression still made a certain kind of sense. Just like the original, except for one confusing instance, I always found myself thinking "Oh! this goes at that one place I saw earlier!"

Like, we know this is a dreamscape, but the rules are presented clearly and the game follows its own logic. For example:

The birds as a sort of trading currency was cool. When I ran into a Spider-cat and only had an insect in my inventory, I instantly remembered the vending machine for birds, and the combining machine. Since the picture on the vending machine says you need a fish coin, and we can logically assume the Spider-cat wants a insect-bird, we then know exactly what we need to progress. The game sets and follows its own internal logic. Perfect!

Reminded me a little bit of the Daymare Town series in that way. But this game also seems to come from a place all its own. Excited to see new installments in this series!

I can't use the

fish coin on the bird vending machine. No matter how many times I click the coin, nothing happens.

Oh, nevermind. I forgot to

power up the generator.

hope a walkthrough is in the works :)

I've quite enjoyed these and hope there's more forthcoming. I agree that there's a certain Skutnik vibe, although far more grotesque than any of his games.
The internal logic is fun. A conventional escape game (is it accurate to call these escape games? Is Submachine really an 'escape' game?) might give you a screwdriver and naturally you'll start looking for screws. These give you eyeballs or dead bugs, but you can still intuit what they will be used for.

Where do I use the arm?

I've come to the area with the

a fly, a jar, an S formed something and something that looks like it comes from under a car (exhaust something?).

Can't seem to go any further and can't seem to find a use for the items. Help? Should I go all the way

Hespetre:
Did you play the first game? You might know what to do with the items you didn't recognize if you did. But for the record...

The S-shaped thing is a crowbar. And the purple exhaust-looking thing is a whistle used to call Cockroach Boy. His specialty is getting rid of giant cockroaches.

One of the interesting things I noticed is a seemingly useless room within the game. In the room before the man that needed the umbrella, between the 10 pound rock puzzle, is a fourth passage way I found by accident. Right above the door to Umbrella man's room, almost entirely covered by your inventory, is a slight yellow passage way outline. It leads to a roughly outlined room with a slanted ceiling that looks like it was taken right out of a sketchbook. There's a usable door that leads back to the room you were just in (I'll call it the main room for convenience), an unusable ladder, and a back arrow that leads to the room before the main room. There's no items, the walls are all warped as if the artist wasn't really trying when they made it, and it only takes you back to the aforementioned rooms. There isn't even any real way to know it's there except pure luck. The entrance isn't an entrance, just an entrance marking on a wall. It seems the developers might have just left it in there by accident.