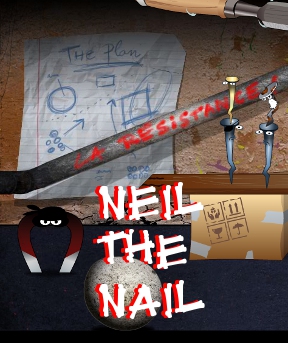 I'm going to tell you right now; Neil the Nail is a pretty short and easy game, but it's also pretty adorable, and pretty charming. The point-and-click puzzle adventure follows Neil, a nail (naturally), as he sets out to free his friends from the hammers and put an end to their bullying once and for all. At the same time, Mr Magnet finds himself imprisoned ("in the dark and smell"), and must escape to join the resistance. Add in Drew the Screw as a plucky love interest and you've got... well, this. To play, simply click on objects to see how they interact with each other, and figure out the correct order to click to proceed. Neil and his friends can't proceed until all threats are handled, so you'll have to think creatively. Imagine, for example, you were a carnivorous rubber ducky. Really, you know, be the ducky. What does it want? What are its motivations? Besides being the one who makes bathtime so much fun, I mean.

Neil the Nail isn't challenging at all, but then, it isn't really trying to be. Most of your obstacles can be dealt with in less than five clicks, and while the few timed sequences may take a few tries, they shouldn't pose much of an issue. This is exactly the sort of light-hearted whimsical fun that leaves you baffled but in a better mood than when you found it. It does end rather abruptly considering the elaborate buildup, and it feels as though it could have done with another screen or two to wrap things up, or maybe provide a thrilling climactic housewares-themed battle. Oh well, guess we'll just have to wait for the film adaptation. (Starring Jack Black, Bruce Willis, and Anne Hathaway, as soon as their agents return my calls.) In the meantime, you can spend a while with Neil and show the oppressors what-for.

Thanks to Lisa for sending this one in!

Hole in the Wall/Floor.

Mr. Magnet in the Dark.

Great surreal humor. The puzzles are not great, but the game is really silly, in a good, refreshing way.

I'm sorry, I don't mean to complain but all Fast Games seems to make are "click things in the right order" the only diffetence being you can lose on "timed" levels, like Easy Joe, Little Wheel (I still love it, alas no list of people to thank), Boy that fell from the Moon (why did that dog have a key up it's butt?).

Part of the fun of puzzle games is supposed to be something that's at least *slightly* challenging. These puzzles are just stupid. The objects that you have in the room are random (wind-up dentures, plate of hot dogs, rubber duckies that get mad at you, toothbrush), and the way you "solve" the puzzles is completely random too. Wind-up dentures eating the hot dogs? A toothbrush making foam out of soap which is supposed to frighten a rubber ducky that GOES IN THE BATH WHERE FOAM IS?

I mean, seriously, please, they might as well have just made random splotches on the screen and make you click them in the right order.

I can see this game being fun for 5-year-olds, maybe.

[Ok, so this game didn't appeal to you. But to say the game is fun only for 5-year-olds is both insulting and offensive. -Jay]

I understand the general complaints about Fast Games offerings. Have you played Adam and Eve? Hardly a brain stretcher. But I'm guessing that's the point and I like that Neil the Nail is just plain dumb fun.

Sorry you feel that way, Simone. I can promise you that over here at JiG HQ, every game that gets a write up gets one because we liked it for one reason or another. We write games up that we enjoy, and that we think are well made, and try to provide a wide variety of content to suit every taste. Sometimes I want deeper, more challenging titles like the Submachine series, but sometimes there's something to be said about simple, cheerful fun. Obviously we can't please all of the people all of the time. Probably the only people who can do that are wizards. And the people who box up donuts at Krispy Kreme; everyone is always happy to see those dudes.

Anyway, come back again tomorrow, and I hope you see something else you enjoy on the site. :)

Very pleasant light entertainment guys. Thank you for sharing this. It's quite captivating for the time it lasts.

In all seriousness, my 5-year-old is way into finding new games to play on JiG (love those kid safety ratings!), and he totally grooved on this one. He is right this minute having us pretend to be hammers and nails.

Only to say, even if a game is aimed strictly at kids, it's not a bad thing to have JiG feature it. According to me, anyway.

Hole in the Wall/Floor.

Mr. Magnet in the Dark.