The plucky teenage detective Nancy Drew is back! Hired to investigate a series of strange notes and shady goings-on of academic sabotage and general intimidation of top students at the exclusive boarding school Waverly Academy, Nancy has to uncover the identity of the mysterious Black Cat before another girl gets hurt. Or worse, the school gets sued! 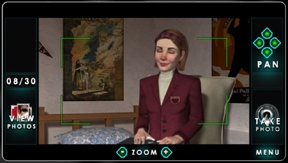 Nancy, if you are not familiar with this icon of teenage literature, is a detective who has been solving mysteries in pulp form since the 30s. She has been the star of 175 books, which makes her more prolific than pretty much any other literary character I can think of. Her games, perhaps not incidentally, share a similar trend, with over 20 in the series since the late 90s, each from the same developer, Her Interactive. Surely that's a record of some kind!

Warnings at Waverly Academy follows a familiar formula that combines puzzle-solving with NPC conversations that uncover new leads to follow, as well as mini-games for variation. No hidden object scenes here (though, oddly enough, I was expecting some... maybe the students are just very neat?). It's pure puzzle/adventure gaming as Nancy wanders about talking to people. Along the way you find items that are useful later in the game, such as journals and notes to read, keys to unlock doors, etc.

The part of the school Nancy investigates houses students aiming for Valedictorian, which comes with a fully-paid college scholarship. Yet these boffins all seem to lump their projects onto you (at least two puzzles involve taking photos for a website). But all those favours are returned, usually with an item useful to tackle one of the game's rather hair-pulling puzzles. Tying all of this together are rather fun and the fully-voiced conversations have a lot of charm, all contributing to a fairly interesting story. 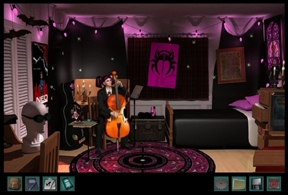 Analysis: Instead of a mystery-themed whodunnit, Nancy Drew: Warnings at Waverly Academy is a hardcore puzzle adventure game. If you're familiar with Nancy's previous outings, this might not be a surprise, but newcomers should expect less of a point-and-click adventure and something more reminiscent of the old Myst games: static screens with limited animation and plenty of pretty mind-bending puzzles. Waverly Academy's puzzles are hard, and if you don't agree, perhaps you should stop playing games and use your super-powers on something else, like solving world hunger or making Pluto a planet again.

But the puzzles are not particularly lateral, which is a bit of a blessing. Instead they are demanding on detail and take a bit of intuition to get on the right path. For example, one puzzle involves a piano — the notes to play are easy to find, but where they fit on the keyboard is not. This took a combination of finding a journal as well as searching the school library database for a book on piano music (not to mention locating the book). Once I had all of that, it was a matter of putting all the relevant information together to tackle the puzzle, which then became a painstaking process of trial and error. A lot of the puzzles test your patience and the game is a bit coy at giving hints. It is satisfying when you figure something out, but at times it can feel like a chore.

That said, I have to be mindful that this is game 21 and Waverly Academy certainly does not want to shortchange its long-time fans. Its challenging nature is a reasonable expectation. There are two difficulty settings, but these do not appear to alter the puzzles. Instead, Junior Detectives get a notebook with a 'to do' list you can consult whenever you are not sure about your options. Oddly the notebook does not auto-tick stuff you've already done, but I suppose it serves as an incentive to keep consulting it (or maybe it exists to remind you how much you are NOT Nancy Drew). 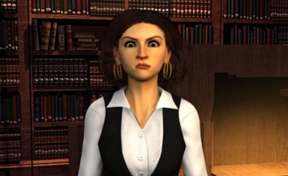 There are some diversions in the mini games. You can play air hockey, which operates just like the real thing, or partake in a game of darts. My personal favourite was the lunch game, where you have to fill the daily lunch orders by arranging breads, cheeses, meats, juices and other stuff accordingly. The monotony of school life is also interrupted by gossip texts on your mobile phone, though these often work in tandem with the story and open new avenues in chat trees with the various girls you meet.

The actual conversations are rather fun (but not skippable) and the character animations, though at times a bit stiff, are engaging. I got to like some of the characters, no doubt aided by some top-notch voice acting that the cast clearly enjoyed doing. Attention to detail is pretty clear, especially the animations and effects of a growing blizzard outside are handled. It has no impact on the story and could easily have been kept simple, but the team at Her Interactive are clearly not lazy or resting on their laurels. They enjoyed making this game, even within the confines of limited presentation and location change.

This adventure might feel a bit stoic in comparison with previous games, as the interiors of Waverly are not particularly appealing or exotic. It would have been nice to have more locations than the dorm Nancy lives in and a handful of hidden or outside locations. Likewise, despite the acting and such, the story is rather dry and eventually you get a bit annoyed with the petty politics that rule the students' lives. The conclusion was also a bit unsatisfactory: in the end you do not really solve the mystery of the Black Cat, but instead a whole different situation that happens to let the villain reveal themselves (though if memory serves, this was largely the formula of both Nancy and the Hardy Boys' books; Mystery Machine riding hippies these kids were not).

But it all serves as a means to an end — and the end are those puzzles. The payoff of the story seems a bit floaty and pointless, so unless you are a keen fan of the novels, the only appeal here lies with solving diabolical brainteasers. I ended up really enjoying Warnings at Waverly Academy, but more than once I felt I bit off more than I could chew. It paid off, though: I can now count in Roman Numerals and I make a mean cheese and lettuce bagel.

Windows:
Large file, no demo available
Get the full version

FYI, this review seems to be missing the 'windows' tag.

Really loved this game. I got stuck a bunch of time, but there was always darts or airhockey to kill some time.

im struggling to pick up the key in the storage room by the snack bar, and i cant do anything before i get that key. my icon wont light up.. why? do i need to do some thing else first?

I'm having the same problem with the key in the storage room. You figure out how to pick it up?

same problem is there still no solution the storage room key problem.

To get the key in the storage room closet, turn on the lightswitch beside the door first. I couldn't figure it out for a while, so I felt sort of stupid, but hey, it works!

How do I figure out the piano?