Nancy Drew isn't as well known or as popular these days as she's been in decades past, which is sort of a shame, since even though the gal is pushing ninety (the first books came out in the 1930s!), she's pretty rad. Nancy has solved hundreds of mysteries over the decades, from small town crime and murder to globe-trotting conspiracies, but there's always been one she's never solved... the death of her mother. In Her Interactive's point-and-click adventure game Nancy Drew: The Silent Spy, Nancy receives a letter telling her what she's always suspected all along... that her mother's fatal car accident eight years ago was no accident, and indeed that Kate Drew may have been killed by a group she was investigating. See, as it turns out, Kate helped thwart a biological terrorist attack nearly ten years ago, and while nobody knows what the ultimate goals of the group known as Revenant were, everyone in Glasgow is getting understandably nervous as the anniversary of the attack approaches. Now drawn in with the promise of finally finding out what happened to her mother, Nancy might get the answers she's always wanted... though figuring out who to trust, and how to stay alive, is another matter. 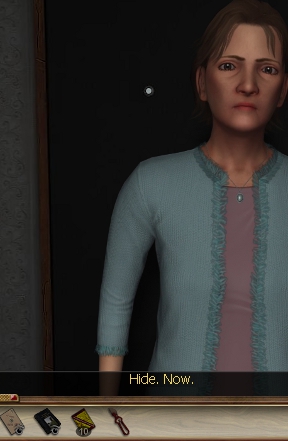 For the most part, The Silent Spy plays like a traditional point-and-click adventure, with the cursor changing to show whether you can interact with or move to a new location. Much of your time will be spent traveling around Scotland, which costs a bit of cash, but Nancy can make money performing part time work. The game is largely non-linear, so figuring out how to proceed is all up to you... you know, like an actual detective and all? Being heavy on story, it's a relief that The Silent Spy is both extremely well written and acted. Though the graphics look a little dated when it comes to environments, characters animate expressively and their lines are delivered with a lot of conviction and personality. Significantly less welcome is the game's obnoxious navigation, which feels like you're controlling a robot mounted on a segway. Sometimes the view will automatically spin when you move your cursor to the edges of the screen and sometimes it won't. Figuring out the proper angle to approach something is awkward, especially when many viewpoints offer zero interaction unless you're facing them properly.

That being said, however, if you want a mystery that actually feels like one, with shady characters, plot twists galore, and a heavy focus on detective work, The Silent Spy is easily recommendable. You're largely left to your own devices, not just when it comes to plotting a course of action, but solving the hefty amount of puzzles you'll encounter, most of which rely on you figuring out codes from information you've gleaned. The lack of a hint or skip function, as most "casual" games come with these days, means there's no help at all if you get stuck. This is, however, a game with genuine heart, clearly made by and for fans of Nancy Drew. There's a much greater focus on Nancy herself, as well as her family, in the story that fleshes the characters out and makes the mystery feel that much more personal, with flashbacks to Nancy's childhood expanding on the backstory in great ways. Despite a clunky interface, Nancy Drew: The Silent Spy is still an exceptionally crafted mystery that's perfect for fans who prefer not to have their hand held, and will suck you in til the end if you let it.

Actually, there is a hint function if you play on Amateur Detective level. In the task list (it's on the lower left of the in-game screen), there will be a little blue square with a question mark on it beside each task. Clicking on the square will display a series of hints, requiring you to click on "I need a hint" to reveal each hint, finally leading up to "I need a solution", which, of course, gives you the full solution for the puzzle/task in question. That said, there is no "Skip" function on any of the puzzles, just as Dora said above.

I would like to mention that this game, while very good, misses the mark when it comes to mentions of Scottish heritage and culture. Yes, there are some facts that are mentioned because they are necessary to solve puzzles, but I wish that HerInteractive had included more of the actual Scottish culture and history in the game, as they did in Shadow at the Water's Edge, where the culture and history of the country in which the game took place were extremely important to the entire storyline. I felt like The Silent Spy could have taken place anywhere without any mention of culture, history, or etc., and have been exactly the same.

But I shall stop there. As I mentioned, and as Dora said much more eloquently, The Silent Spy has a well-written storyline, good voice acting, and fun gameplay, so it's a great time for anyone who loves this type of game.

Decent game.
Played the game on Master Sleuth, had to look on the Internet as my patience is not strong enough when I'm stuck.

-Easy and quick navigation (usually 2-4 clicks to change locations)
-Fun puzzles (some are pretty difficult, though)
-Decent graphics
-You can take pictures of notes, diagrams, etc. for easy referal

- Maybe I'm not used to the serie, but Nancy Drew sounds more like an old cat lady than a sleuth. She really talks like an amateur and it's tough to be compelled in the story with such a weak character.

- You'll find every cliché from spy movies of the last 30 years. And by every clichés, I mean EVERY clichés:

- Like many games of the same genre, you sometimes need to be at a specific place to advance in the game, otherwise you'll be stuck