Myths of the World: Spirit Wolf

The first day of work at a new place is always nerve wracking, especially when you, an expert on native American symbols, are heading to the Center for Native Cultures when suddenly symbols and your amulet begin glowing. At the same time, the local mushrooms are suddenly the size of Buicks, and there's a ghostly Indian maid asking you for help, and there's a glowing spirit wolf wandering around... yeah, this is not your normal first day of employment, is it? No, it is in fact the opening of Eipix Entertainment's beautiful new adventure hybrid, Myths of the World: Spirit Wolf. 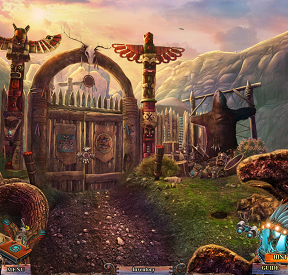 Point and click your way through as you attempt to solve the mystery of the glowing symbols, amongst other things, in a world packed full of adventuring, mini-gaming, and hidden object finding. Alongside the expected mix of gaming there are extra quests like finding sun runes in every scene. In fact, along with the usual picking up everything not nailed down you will find yourself building and using your now glowing amulet to unlock symbols, using your trusty binoculars to find far-off clues, and solving a ton of puzzles and mini-games. To help you along the way are the usual changing cursor, a useful map that allows you to instantly travel from place to place, and the obligatory notebook to keep track of clues. 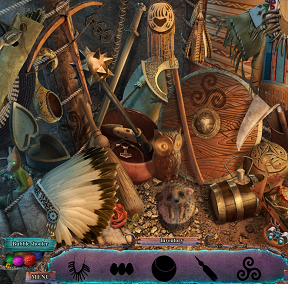 Every inch of Myths of the World: Spirit Wolf is packed with gameplay. Each hidden object scene features not just simple "find this object" gameplay, but a multitude of "combine these objects" sub-quests. And for those who disdain hidden object finding, the choice to instead play a rousing marble popper game is a joy. An amazing amount of effort appears to have been poured into every aspect of the gameplay, from the visuals to the music and sound, creating a game that looks as good as it plays and plays as good as it looks. If Myths of the World: Spirit Wolf has one downside, it is the co-opting of every practically every cliché of Native American culture that ever existed. Despite this insensitivity, Myths of the World: Spirit Wolf takes hidden object adventuring to new heights with its stunning look and marvelous gameplay. The ability to customize the difficulty levels only enhances what is already amazing adventuring fun. Crank up the Duran Duran and get playing!

Note: Myths of the World: Spirit Wolf is currently only available in a Collector's Edition, which includes wallpapers, music, animations, concept art, extra gameplay (including both a new adventure and the ability to replay each and every hidden object scene and mini-game), and a built-in strategy guide. Remember that Big Fish Game Club Members pay only $13.99 for Collector's Editions, and collector's editions count 3 card punches of 6 total needed for a free game.

To be perfectly frank, games and other media using my culture only bothers me when it's in a stereotypical fashion. The evil shaman cursing or menacing folk. The mysterious native dude warning folk. The wise native who teaches the young (usually white) cast about whatever mystical danger is going on and winds up dying. There are a lot of tropes I find offensive simply because they're so tired and one dimensional, so I would be more open to something that at least tried to explore my culture in ways beyond those simple token fashions. We do have some pretty bizarre legends and customs, after all, depending on where you are. (Try reading Daughters of Copper Woman sometime. My mother gave that to me when I was eight and I PROMISE you it makes even less sense now.) Of course, I obviously can't speak for everyone, and different people are going to feel differently from yours truly.

Hm yeah the images DO look stereotypical but I havent played it yet cuz I was scared off by the name. Games so far have handled Native cultures... badly. I get wary of any games about anything besides US/Europe as they tend to be really inaccurate and going for "exotic". I feel so weird talking about this cuz most ppl dun like talking about race/offensiveness in games but it's OK here right?

As long as the discussion remains topical and civil towards both the other readers and the creators, of course. :)

I understand what you're talking about insofar as "exotic" tending to sub in for actual culture representation, but I'd rather see developers keep trying than avoid it entirely. The only way anything can ever change is with honest and open helpful feedback, right?