Dust motes dance in the air as you stealthily make your way along the abandoned corridors. All around you is the detritus of a once occupied mental hospital, now descending into ruin. The pungent odor of decay permeates your nostrils as you carefully pick your footing, tiny creaks and groans reminiscent of bygone shrieks and moans echo in the stillness. Suddenly you see a sign of life ahead, twin girls, strangely still, observing your every move. Is this a nightmare? The Shining? No, my friends, it is Mystic Asylum by Selfdefiant in this week's Weekday Escape. 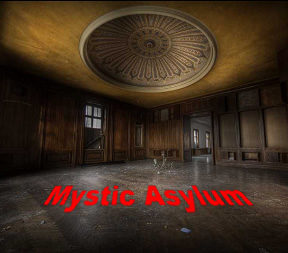 Mystic Asylum is more of a building escape than a room escape. Seriously, there are a lot of rooms in this place. Apparently you have been chosen to rid this abandoned asylum of its negative energy. Okay, not The Shining, more like Poltergeist then, with you the casual gamer cast as Tangina Barrons ("Don't go into the light, Carol Ann!"). Why does the asylum have all of this negative energy? What, haven't you ever seen a horror movie? What old abandoned asylum doesn't? Why have you been chosen? Who knows?

The object of this large escape effort is to explore the decaying building, finding purple energy orbs to rid the place of the negative energy. Oh yeah, your job is to also figure out how to get the heck out of Dodge. To that end you will do lots of wandering around, picking up helpful objects, solving puzzles, unlocking a lot of doors, and hopefully enjoying this amazing tour through a stunning space.

Navigation in Mystic Asylum takes a little getting used to. Hover your cursor at the sides, top, and bottom of the screens and when a hand appears, then you can click and move in that direction. Strangely, to move forward you must hover at the top of the screen, rather than just clicking a door or a foreground. Some rooms can be entered or exited in only one direction. And then there are the locked doors. Fortunately, the first thing in your inventory when you begin is a handy map showing you the layout of the facility. Use it often or you risk wandering for an eternity with only the spooky twins for company.

Scattered in every room are small purple energy orbs. You must accumulate these as you go, lest you risk being consumed by the negative energy that permeates this rotting shell of a building. There are also useful objects to pick up, clues to find, and puzzles to solve as you meander your way around. There is a changing cursor, so watch carefully in each room or you risk missing a vital object or piece of information that will help you get out. 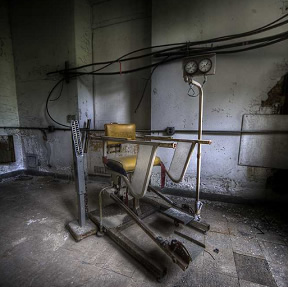 Analysis: Selfdefiant's games tend to fall into one of two categories: cute, cartoony point-and-click adventure types (Kidnapped by Aliens, Escape from the 13th Floor) and haunting, photorealistic and spookier escapes (Absence). Mystic Asylum is one of the latter, with stunning urbexing photographs by Andre Govia that automatically make you want to slow down and just appreciate the urban decay. There's a spooky sound loop which can haunt or just become annoying, so fortunately there's a mute button handy for when it becomes a bit too much.

Mystic Asylum isn't just gorgeous scenery, however. There's a lot of escaping fun here amongst the amazingly creepy settings. A nice balance of use of found objects and puzzle solving make Mystic Asylum an amusing (and very creepy) mid-week break. The game has an auto-save feature, so if you leave and come back you will be right where you left off. Play more than once and see if you can improve your score, which is a combination of how many energy orbs you can find combined with the fewest amount of clicks it takes to complete all of your tasks.

Is there a downside? Well, yes, a few minor ones. Many of the objects are small and placed in dark areas, so you really need to "sweep" a room with your cursor to find the hotspots. It can be very easy to overlook a vital and necessary piece of equipment in the sweeping vistas, which can become annoying. The odd navigation is a challenge at first, but rely on your map and eventually you will begin to make sense of the twists and turns contained in these 35 rooms. And the inclusion of the "Shining" twins seems like a bit of a waste, since it's not like they actually do or say anything.

Spooky rather than scary, Mystic Asylum is a game of chills rather than frights. No jump scares here, just a lot of spooky atmosphere enlivened by the standard conventions of a room escape. Stunning to look at and fun to play, Mystic Asylum is also a nice, creepy escape slap dab in the middle of the holiday season, something to cut the treacle and a relief from all of the frantic shopping.

Section 2 (Behind the Green Door)

Section 3 (The right side of the map, Red Key, Red Door)

Section 4 (Beyond the Red Door)

Section 5 (Beyond the Gray Door)

Well that was tedious.

Once you work out how to get out of the first room (move the cursor right to the top of the game screen until it changes) you spend most of the time horrendously lost.

With the aid of a map, a 'walkthrough' map detailing where I'd find which items, and

Some sort of witchraft ritual hidden behind a locker?

I eventually managed to get rid of the darkness or whatever the point of that was.

That took far too long for a game with such simple puzzles. Even with the map, moving around all the rooms was really confusing, at least until I figured out how it relates to the actual layout. Some things I noted:

Ridiculously hard to find. Be sure to meticulously sweep the floor of every room with a wheelchair.

Although the green and red keys match the doorknobs of their respective doors, the colors of the others don't seem to have any connection to the doors they're supposed to open.

After the gorgeous, spooky graphics of the rest of the game, the room with the little crystal ritual seemed bizarrely out of place. Or maybe it's just me.

Drawing out the map with the room connections helped it to be less confusing while moving your way around. Noting what you found in each room helped in getting around quicker, as well.

Section 2 (Behind the Green Door)

Section 3 (The right side of the map, Red Key, Red Door)

Section 4 (Beyond the Red Door)

Section 5 (Beyond the Gray Door)

Beautiful images, but none of the rooms really felt like they flowed into one another. More like they produced the images and map separately, then just slapped them together. Navigation is unintuitive, finding your way out of the first room is probably the hardest puzzle in the game. Always facing North and having only one view per room simplifies things, but feels awkward.

The worst offence was the soundtrack. While the imagery is going for 'creepy abandoned asylum' the music sounds like the 'go forth and wreck stuff' themes from Doom.

Grinnyp, did you really want to do a section of the walkthrough called 'Behind the Green Door'? Google or Wikipedia to find why I ask....

Also, am I the only one reminded of Scientology with this premise?

grinnyp 50th orb is in

Super walkthrough, Grinnyp. Naming the rooms the way you did was a great idea.

I would never have had the patience to complete this on my own.

For a game with so many rooms, it would be cool if the map gained more information as progress was made. Maybe there could be a mouseover thumbnail available for any room that had already been visited. And then it would also be nice to be able to teleport to previously seen rooms rather than having to navigate.

Maybe that would make the game too easy ...

Loved this game... love this kind of escape games puzzles were prety easy having a map was great.. and loved all the rooms..thank you...

I am old enough to remember when that movie came out, so of course I understand why I shouldn't have used that title, but my sense of humor at 3 in the morning is a little strange.

So there were two orbs in the electric chair room? Thanks!

having trouble getting started

after collecting the purple sphere at the top in the first room,the next step is to go forward. i clicked the open walkway into the next room,but nothing happens.

Move your cursor around the very edges of the game screen, and hands should appear telling you where to go (you can only go forward out of the first room).

As for what I thought of the game...

It's never a good sign when you can't navigate without help (and I did need help getting out of that first room). The navigation was atrocious. The game would've been greatly improved by allowing you to jump to certain rooms by clicking them on the map. Or maybe if there were some sort of flow to the rooms, instead of just a string of seemingly unconnected images. Or maybe if the map had been a little more detailed, like "red key in this room". Or maybe if you weren't always facing north, because when you're facing north and then enter a room to your left, you expect to now be facing west.

The ungainliness of the navigation and the large number of rooms meant I had to consult the map whenever I tried to go anywhere, right up until the very end of the game. Add that to the pixel hunting (that screwdriver!), and what should've been a simple game became unnecessarily and unpleasantly complicated.

Personally, I thought the fact that I was always facing north and clicking at the top of the screen always moved me north made the game easier to navigate. It was the same as a text adventure - you're not really facing any direction, you're just in a location, and all the exits are compass points. It just needs a little note about the navigation in the help screen at the beginning of the game.

I love the carpet from The Shining touch!