Mystery of Unicorn Castle: The Beastmaster

Let me start with the moral of the story: if you don't want your home to be overrun by giant rats, don't live in a lavish castle. If you insist on being a wealthy nobleman, you have to put up with the occasional possessed warlock trying to take over, which is why you've procured a magical unicorn (awwww!) to protect you. But then the warlock turns the unicorn into stone, and you're in big trouble. Many years later, a detective is investigating the disappearance of a little girl which leads straight into the forgotten castle, and thus begins the Mystery of Unicorn Castle: The Beastmaster, the new hidden-object adventure by Meridian 93. 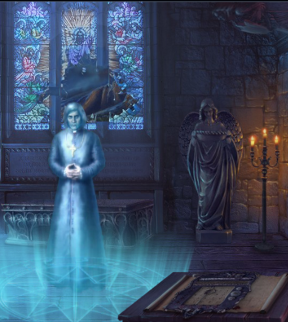 As you approach the castle grounds in search of little Sophie, you'll become rather acutely aware of a certain rodent presence, namely huge, bristling, belligerent red-eyed rats. (If you aren't particularly fond of rats in general, be on your guard, because they tend to pop up in a good number of scenes.) You manage to locate Sophie, only to have her snatched from you by the warlock, who plans to sacrifice her in order to gain immortality. While you're trying to unravel the mystery behind this nasty old man, you will be approached for help by ghosts who haunt the castle, unable to find peace. Their testimonies will provide pieces of the story and help you understand how to defeat the villain. Of course, your detective skills will also come in handy, because there are many items to find, doors to unlock and mini-games to play. While all this is pretty typical for the genre, there is an interesting innovation in the "karmic choice". Every once in a while, you'll be asked to decide whether you want to be naughty or nice... for example, whether you want to use one item to smash an aquarium, or another one to gently fish out the item inside. These decisions won't influence the course of the story, but they do give you trophies and allow you to take a break from the goody-goody image of the usual casual game protagonists. 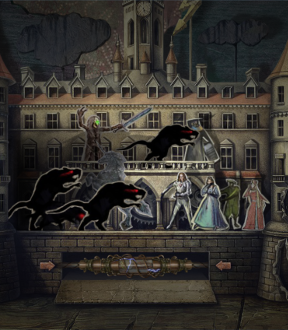 The best moment to play this game is when you feel like having a thrill without actually being scared. There is no horror here, but the game is dark and ominous enough to keep you on your toes. Unfortunately, the darkness also means that the scenes are a bit gloomier than ideal, and some hidden-object scenes look dishearteningly monochrome. The number of locations is pretty impressive, considering that the story never leaves the castle grounds, but never fear, the interactive map will teleport you wherever you need to go. Even though Mystery of Unicorn Castle: The Beastmaster doesn't break new ground, it could well give you a pleasant surprise or two. It's a rather simple, solid story, without much drama, intrigue and convoluted plot twists. If you'd like a more raw game, with no fairy godmothers and happily ever afters, try this one. Oh, and don't mind the rats, they're actually quite cuddly once you get to know them.

Mystery of Unicorn Castle: The Beastmaster is currently only available in a Collector's Edition, which includes a bonus level, concept art, wallpapers and more. Remember that Big Fish Game Club Members pay only $13.99 for Collector's Editions (or 2 club credits), and collector's editions count 3 card punches of 6 total needed for a free game.