It was just a locket found while mudlarking... that is, searching the banks of The Thames in hopes of finding discarded artifacts of old. Most Mudlarkers dream of finding that one great treasure that will bring fame and fortune, but Winston's and Vincent's dream shortly became a nightmare. You play as Winston, a Londoner with a week off of work who was planning on spending it with his best friend, Vincent, who finds an old locket. Then two days later he vanishes leaving his precious locket behind. Winston must find him, and something deep inside of him tells him that if he doesn't hurry there won't be anything left to find. So starts this point and click adventure game, brought to us by Cloak and Dagger. Mudlarks is a free indie game of mystery and friendship as you must find the enigma behind the locket and be willing to face it all, whether it be radioactive meteorites, a dark government conspiracy, or even the supernatural, to save your friend. 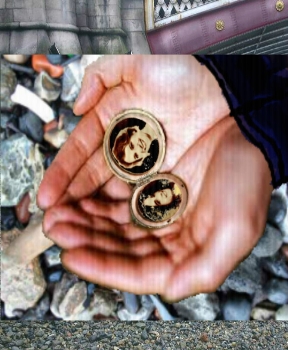 You can use the arrow keys to move around, but it's highly recommended to just click. Switch between actions (speak, walk, grab) by right-clicking. A lot of the game's quests follow the "you scratch my back, I'll scratch yours" pattern as well as hunting for items to aid you on your adventure. Winston, however, plays like a normal human instead of the hero of an average point and click game and usually won't pick up items he doesn't believe he needs. Speaking with everyone is the only way to make it through the game as they will tell him what he needs to do in order to move on. The story is done so well though that in most moments like these, the answer isn't so obviously glaring in your face that there is no frustration about needing to speak to someone to advance the puzzle. The story and game play mesh so perfectly that you never feel taken out of the plot to do some some "adventuring". It's also one that will keep you on your toes as you try to figure out what really happened to your friend.

I'll admit the art style put me off a little at first. Sometimes characters move awkwardly or carry odd expressions, and all the bodies are a little disproportionate. After playing a little while, however, I grew to love it, with the photos done well enough that there is depth to it. It gives you a real world to move around in and it's easier to slip into the atmosphere and alluring story. Some scenes end up looking a little cheesy, but the plot is involving enough that a little cheese doesn't take away anything. The other downside to the art medium is it can be hard to spot items you need or can interact with, but thankfully, when you mouse over the said items, large text will appear at the bottom of the screen. Even with its minor flaws, Mudlarks is a refreshing game and a great adventure. It may take you a day or two to play through, but you'll still feel the ending was too soon as you won't want it to stop.

Stuck. Does anyone know, how to make the

Maybe this is a stupid question but when I try to download the game all I get is a popup that wants me to buy a product called winzip???? I don't want to by a $30 program for a 'free' game is this an adware or virus? Why can't I just download the game?

Also, if this happens after you have already downloaded the game, you simply need to unzip the file, perhaps your computer thinks you need Winzip to achieve this. Modern windows computers have built in unzipping support, if you have an older computer you can download winzip free of charge

I'm stuck. How do you

...Nevermind, figured it out!

Thank you Shaun Aitcheson, that was the problem, my computer doesn't have an unzipping program, I installed one (for free, not $30, as Winzip says my trial had ended hence the $30) and I was able to download Mudlarks, thanks for your help :)

I can't figure out how to make the meteorite, any help would be appreciated Thanks!

Make sure you've talked everyone there at the beach.

The scientist you gave the muffin to has a paper that gives you a description of the meteorite.

Once then you can pick up the Three items you need.

The round rock, the tube of glitter, and the charcoal(or just coal can't remember what it is.)


Some items you won't be able to interact with until Winston realizes he needs them, so try after speaking with everyone look again for the hot spots.

Thank you Lori H. I have spoken to everyone, gotten the Paper about the rock, gotten the rock, charcoal, and glitter, I will try again :)

I have no idea

Marematt- If you're still stuck

Use the coal on the rock, to turn it into powder. After that point you need to make the coal paste like to be able to cover the rock.

Use it on the river

Have you tried to click on the bottom drawer?


And to get the key

Alright, stuck in the final(?) room with Vincent. How do I open the safe or file cabinet?

if Vincent is untied, either head towards the door or look at the safe, the ghost should appear.
Then you should just be able to click on the folders Above the safe, with the Hand Icon.

How do get the piano player at the pub to stop? I know it's something to do with the audition leaflet at Vincent's place, but I can't pick it up or use it in any way.

Can't wait for a full walkthrough for this one. I'm stuck on day two with no idea what to do next.

Smallfish, be sure to use the spoiler tags when commenting about a solution (or even part of one =) )

You have to talk to the piano man first. He'll make a comment that will have Winston mentioning the pamphlet in his own thoughts. Then you can pick it up.

I'm stuck in day 2, the author has told me to

find the date of the locket by going back to the Thames, but the entrance is now guarded

. I think I need to do something with one of the radios but I've tried everything I can think of. Does anyone know what I'm talking about?

OK thanks, that's probably how it should work but I can't manage it. I've been back and forth the two places, looked at the leaflet, tried to pick it up etc. but I still can't get a comment from the piano man that would enable me to pick the leaflet up.

Here is a few things that may help.

Have you talked to the white haired man in the bar? He lets you know about the groove in the back and that you need to go mudlarking again.

Go to the beach area again. You'll see a guard there and he'll make a comment on the radio. Than go back to quarantine.

Look at the laptop to note the sticker. Then speak to the man behind the desk, both options. Then, you should be able to go to the beach.

Smallfish
Do you have a reason to make him stop?

You should have asked gus to do you a favor for someone in quarantine area.

I can't remember what I talked about with him the first, now I can't start a conversation with him at all. I guess I might have found a bug of some sort.

smallfish: make sure you talk to the scientist at the quarantine tent, noting what is on her screen

Ah OK, that did the trick. Thank you.

Thanks Lori. I shoulda figured that one out!

Here's a hint to everybody: if you're stuck look at all items on a screen, even if you've done it previously. Something that served no purpose before may become important later.