It's a brand new day. Mom is off to her job at the store. Dad is spending the day working in the garden. The neighbors are having their conversations and arguments, some friendly, some not. Also, the moon is falling from the sky. Until it does, though, there's an entire world to watch. And watching is something you're good at. Mike Salyh presents Moonkid, a haunting monochromatic piece of interactive art. Use the [arrow] keys to move around the neighborhood, pressing the down [arrow] to interact with objects and talk with people. Moonkid is set on a timer from 9:00 to 6:30 PM, and the characters within each have their narratives for you to follow as their paths meet, diverge and cross again, The Last Express style. Some are sad, some are bittersweet, and some are even darkly humorous in their own way. Altogether though, they are certainly affecting. 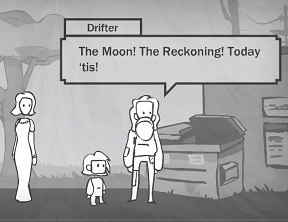 Those who aren't fans of that peculiar experimental brand of art game along the lines of Every Day The Same Dream or One Chance might not be thrilled with Moonkid. Undoubtedly the pace is slow and most of the interaction limited to observation and minimal effects on the environment. And yet, one cannot help but feel something evocative in the last day of the protagonists life. It's the opposite of a power fantasy: a study of the helplessness of childhood extended to the same feelings we have as adults. Or maybe it's just a cool little interactive story of a town in dire need of a kid with magical ocarina training. Whatever. Moonkid lets you decide for yourself, and that's rare enough to be worthy of sharing by itself.

Is it more than a interactive story, or is there some kind of escaping possibility?
Nice role of the

I usually don't stay for interactive art games, but this was something else. I followed the family the most of the way through, and the ending was spot on.

Haven't played a game that tugged at the heartstrings like this in a while, great job with the story and especially the music!

What is the significance of

I was disappointed that following the drifter around all game didn't end with me on the hill with him. Likewise, I wish there'd been more payoff with the shovel.

The drifter appears to

begin digging a grave for the man that Gretchen is about to shoot, as he says he hates that part

This makes me excited about the future of narrative. For the first time we can see how the plot unfolds from several points-of-views in real time. It does what text can't.

How do I wake up in moonkid?

Does anyone know what the music is for this game? I can't find it anywhere!