The problem with kids these days is they just don't get it. They think the fun is all about jumping around, making noise, playing games...being sociable for goodness sakes. As if. Napping is where it's at. But don't try telling Junior and Jenny that—not only do they feel like bouncing about and giggling, they want sleepy dad to join in. All tired, overworked parents out there can sympathize; no wonder it's called Monster-land. That's Monsterland 4: One More Junior to be more exact: a continuation of Alma Games' physics puzzle series bringing 36 more nap-busting levels, made just right for a relaxing break without the Zzzs. Just point-and-click to pop blocks in the right sequence to move Junior (who jumps on dad to wake him) and Jenny (whose special moves break dad's kid-proof helmet) through the increasingly complicated obstacle courses and onto dozing dad. Sometimes this is a straight-forward drop or slide, other times you'll need to make use of buttons, treadmills, trampolines, teleports and more. All while avoiding saw blades and long falls, such things that are hazardous to kids' health. 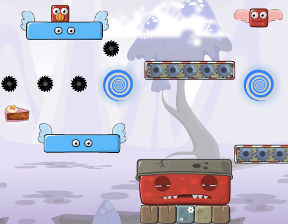 Just as in the other Monsterland games, this fourth installment is never overly difficult. They start out easy but there are incentives, such as the 6 bonus levels and multiple achievements, to encourage quick thinking and perfect strategy. There's not much here to surprise those familiar with the earlier installments but, then again, there's no disappointing changes either. More of the same is just fine when you're in the mood for a favorite after all. Solutions usually present themselves rather obviously although you will use trial-and-error in later levels for testing out the physics, to see just how high an eye might bounce or find just the right time to reverse a treadmill or clip Junior's wings. These later levels, as well as the bonus levels, have enough tricks and treats to make you feel you've earned your success. There are instances when precision timing is needed, but it's never fickle, and the mechanics are predictable and responsive enough to let your logic rule the course. It's this sort of accessibility that makes Monsterland 4: One More Junior so enjoyable, something to be played during your chill time or to share with kids, the fun graphics and well-constructed design remain engaging throughout, plus high production values earn its JayisGames-parent approval one more time.

I really like games like this. It's a game my son and I can play any time. Strategy based and every time you beat a level its fun to hear the little guy giggle.

> Bryan Gawinski— This little red block monster's father doesn't want to play with him, but maybe you can change that in this eye-infested tumble drop physics game. Made with the Box2D physics engine, you get a cutesy puzzle game backed by reliable and well-tested physics that won't waste your precious free time. Click away as few mean monster blocks as possible to reunite a playful son and his tired dad for high scores and star ratings. The adorable music and a squealing son will put a smile on your face, guaranteed!  ...

> Tricky— Alma Games presents another chapter of the great struggle of Sleeping Parent Vs. Energetic Child in Monsterland 2: Junior's Revenge, a tumble-drop physics puzzler. A bit derivative of other Box2D engine-based games, but still a colorful medium-challenge mental work out.  ...

> Dora— He's baaaaaaaaaack. Junior wants to play, and Senior wants to sleep. This time, in addition to a bunch of precarious physics puzzles, Senior's set up some traps to remain undisturbed. But Junior's not going to let that stand in his way, and he's even got a new trick... wings!  ...

> Dora— Alice returns to Wonderland to find the Queen is at it again, and the citizens are missing some valuable items! In this gorgeous physics puzzle, you'll manipulate bits of the scenery to create a path to deliver that precious possession to its owner. With a ton of levels and challenging design, this is a familiar but formidable little game fans of the genre will love.  ...