From the combined talents of Irene Antushevich, Alexey Mamadin, Pavel Fedosov, and Nikolay Grechko comes Alice in Clumsy Land, a gorgeous fairytale of a physics puzzler based on the classic children's story of girls almost getting beheaded by megalomaniacal matriarchs. In each stage, the object is to deliver the an important object to each area's Wonderland citizen by clicking pieces of scenery to remove them. The watch will follow the natural path that physics and gravity dictate, and it's up to you to use other objects, like bouncy cushions, to get it into the character's hands. Each stage also has three optional stars to collect that may take a bit of extra thought and planning to nab. Some stages are also larger than others, and you'll have to click and drag to pan around the level. 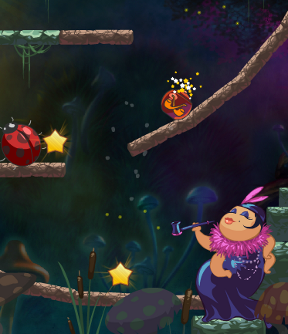 Obviously, looks don't count for everything, but dang Alice, you fine. With beautiful illustrated cutscenes and vibrant level design, Alice in Clumsy Land is a gorgeous little physics puzzle with a whole lot of charm. The gameplay itself is really nothing we haven't seen before, mainly being a variation on titles like Monsterland, Cut the Rope and more, but there's a lot to be said for executing a concept well, and Alice in Clumsy Land definitely does that. It introduces new elements as you go, even new areas and characters to work with, and the physics are both reliable and constant. The game is great at providing "false herrings" in its level setup, frequently giving you multiple objects to remove and manipulate when you really only need a fraction of them for success.

On the other hand, some players may find the challenge ramps up a bit too slowly to maintain interest, and not having every level fit on once screen, as some force you to drag the screen around to see everything, is a little frustrating. I'd rather take a slight downgrade in visuals on those larger, more complex stages to shrink everything to fit. The inclusion of certain objects that force you to act quickly, such as the gas bubbles that explode after a certain amount of time, also feel like they disrupt the relaxing "pick and plan" feel of the rest of the game, which might frustrate people looking for a more relaxed experience. But with an enormous amount of levels, characters, some genuinely challenging and clever level design, and a pretty face to boot, Alice in Clumsy Land is easily one of the better physics puzzles out there and will keep you busy for a long time.

That caterpillar woman is a right lazy cow, she expects you to drop the item RIGHT into her hands.

Don't expect 3 stars from each of THOSE levels.

It seems impossible to get the third star in level 4.

I clicked the blocks as I went, which made a nice zig-zag path through to the stars

I did get stuck on Level 10 for a moment, because I did not realise

the glass platform at the bottom of the ramp, holding two small and one large cake, is actually TWO platforms - so you can just click under the large cake to bring it down to the same level as the smaller ones

Mind you, I do not want to have to load a 25 minute video containing ALL the walkthrough levels just to get a hand with a level. Then again, I'm not a fan of video walkthroughs in general (most walkthroughs are adequately helpful in text/picture form).

...when the cookie comes out of the upper-left-most door, it doesn't have enough speed to go anywhere, no matter what I do.

gave up at level 15, which can screw itself.

I'd give a +1 to the level 15 comment above if I could. It took a few tries, but if you drop at just the right time, it'll work.

The current rating is a bit unfair from my point of view. Music and graphics are excellent, there are many levels with different mechanics; I really don't understand how this game is under 4.

I quickly lost all interest whatsoever in this game once I accidentally clicked on an ad while doing a timed level. I understand the need for advertising in your game or whatever, but if you're required to click all over the screen to manipulate objects and manipulate the camera, then for the love of all that is holy, do NOT include easily-clickable links to the sponsor's site! At least assign camera controls to be activated when your cursor is at the edge of the screen... I know mobile games are the trendy it-thing right now, but that's no excuse for shoddy controls in the Flash version that don't make use of the mouse to its full potential.