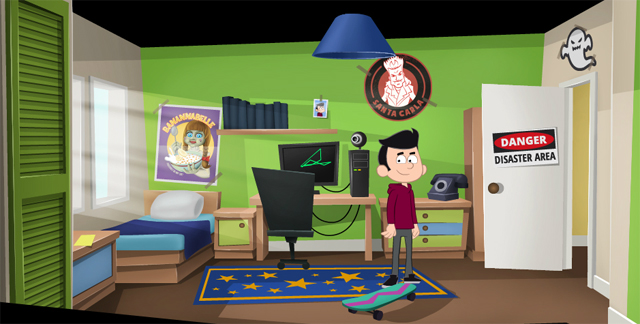 It's every kid's fear of the creepy neighbor -- the kind of secretive, mysterious shadow man that Mom and Dad usually brush off. But with Michael, is it unjustified? Or is there a real possibility of him meeting his demise if no help arrives?

Fortunately, our resolute protagonist doesn't see that as an option. In this point-and-click titled Monster Squad, Michael jump starts his journey as a paranormal investigator. This debut is possibly Carmel Games' reveal of a new series, one that is analogous to the well-loved Vortex Point.

Monster Squad gives players a classic Carmel Games point-and-click and is full of the usual quirks. The expected map navigation takes players through the town to various locations of interest. The game is overall short and simple; but like some past Carmel games, a couple solutions involving object usage and puzzle keys can be a bit of a reach.

In its conclsion, Monster Squad illustrates how teamwork can launch a budding frienship into a whirlwind adventure. It's the sweet story of a resourceful boy asking for help and overcoming obstacles -- a tale for the ages. Based on the ending, we already know where the next episode might take us!

One internet video won't be enough to save Halloween! You'll need to try harder.

The only one powerful enough to help is the school bully Rocko, but you'll need to call him in advance before you leave the house.

The phone is working but you don't have a number to call. Your computer won't help here, nor will the photo of yourself attached to the wall above it, so keep looking around and you find a silver dollar coin under your pillow, as well as a post-it note on the table. Ah, there's his number!

Thankfully, you can dial this rotary phone by just pushing buttons. Punch in the number (5551734) from the note to start the conversation.

He's not in, which means he could have gone to a few places. Let's check all of them.

Let's visit the Legitimate Business! The entrance to this perfectly legit establishment is blocked by a muscly man who informs you that you're too young to enter.

Never mind then, how about the Happy Cone? As you prepare to get something cool for your silver dollar, the cashier informs you that even the cheapest ice cream is 10 dollars. Maybe you'll just settle for scooping up that sticky goo on the table in the background.

Maybe you need more smarts, so you drop by the Public Library. The librarian remains completely silent until you reach for the emergency box. Moving deeper into the shelves, you emerge at the other end of the library where you find a lost ID card beneath the window, as well as a fire alarm panel.

Alright, last place to visit is the Park, where you (finally) find Rocko picking on a nerd. You're pretty sure that Walter's sun collector is just a cardboard box. Anyway, what Rocko really wants for your help is some ice cream.

You certainly won't find it in the park restroom, which has graffiti and toilet paper everywhere, as well as farts dissipating from the toilet bowl. It almost makes you want to reach for the first aid box, but you can't open it.

The Legitimate Business bouncer won't accept your photo, nor your coin, nor the ID of a blonde woman, but it feels like you're really close.

Cover the ID with the goo and then your photo.

Now the bouncer accepts your fake ID and lets "Mrs. Parker" in. The bartender at the Midnight Lounge is rather grumpy and won't let you take his boxing gloves. The dangerous panel on the left can't be opened, so you just sit at a slot machine and spend your only money.

Unbelievable, you scored a jackpot! Your prize money seems to be a single 10-dollar bill.

Looking at that lovely money, you know what you need to do: spend it all on a single ice cream cone.

Remarkably, the ice cream stays intact as you jog over to the park and hand it to Rocko.

After an awkward moment where Walter takes his leave, Rocko expresses his skepticism and agrees to do some beating, if you can get him some boxing gloves.

Walter's lab is on the map, so it must be important. You're stuck anyway so why not visit?

Walter welcomes you into what looks like a garage full of cardboard boxes, but all you care about is the glowing cube behind him. As he explains, all you have to do is click the right buttons.

Each button shows the same pattern whether you turn them on or off.

The box flashes in different colors and Walter gets so impressed he gives you his sunlight collector prototype and a box of matches just in case.

Who needs backup plans in an adventure game, when you can be playing with fire?

The game doesn't let you burn hundreds of pieces of valuable literature in the library, so you need to find somewhere else to use those matches.

Go to the park restroom, and drop a single match in the toilet.

It's super effective! Good thing you aren't hurt, because the hammer in the first aid box wouldn't help.

Now you can simulate a fire in the library by smashing the fire alarm panel and pushing on the button inside.

With the librarian gone, you can open up the emergency box and take his crowbar.

Bring the crowbar to the Moonli- the Legitimate Business, and use it to break the panel marked Danger.

Oh, it's just a light switch. How dangerous can it be?

Not dangerous for you at all, as you easily plunge the lounge into darkness, grab the boxing gloves, and leave.

Hand the gloves to Rocko to complete the plan.

And the plan works perfectly, up until the powerful fighter gets hypnotized on the spot. Good thing you brought a secret weapon.

Use the sunlight collector on the vampire to end the game.

And that's how the Monster Squad began!