Monkeys are back (again)! The Roundup 23 features three short stories and they are odd-numbered only. That's because Robin Vencel, the creator of Monkey GO Happy's games, reserved even-numbered episodes for his patrons - more on his page.

483 The Search for Real Christmas Theme 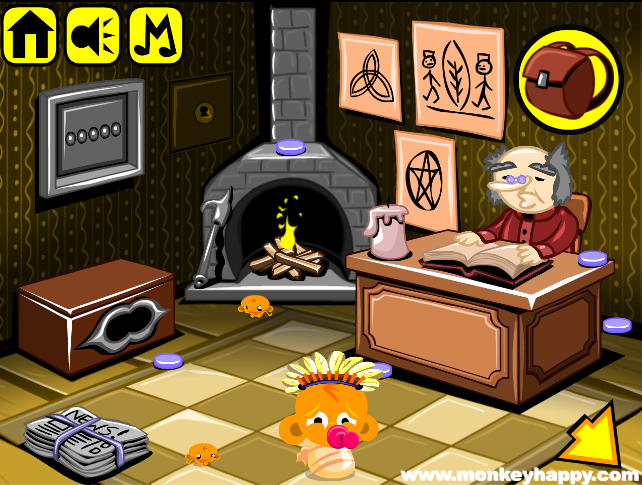 In the first Christmas episode you need to collect ten little monkeys - as in all episodes - and help two men living on the street to get warm. Can you, please? 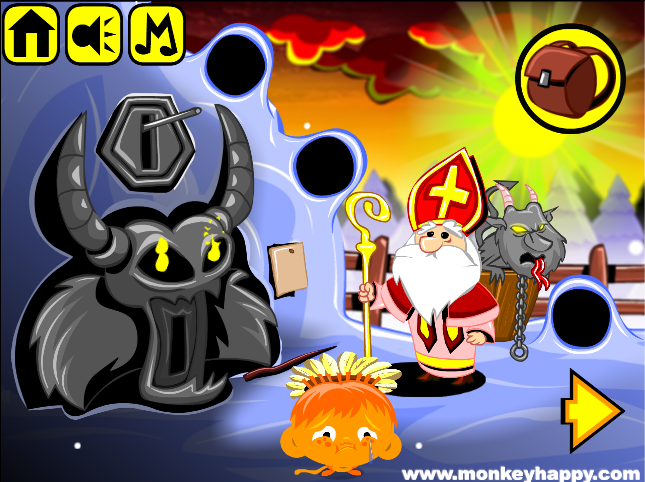 The second episode features Saint Nicolas and Krampus - many Krampuses in fact! The cave you open at the end seems to hide infinite number of them. 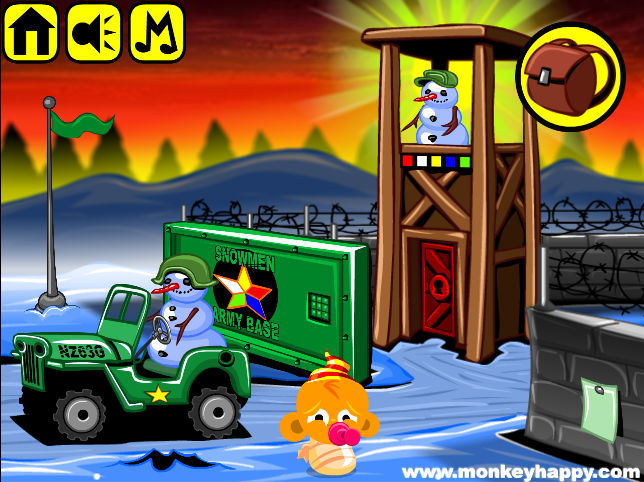 The military base you need to penetrate is controlled by heavily amed snowmen and hides many more...where are they marching? Any idea?

This says "platform: Flash", which is incorrect. This seems to be HTML5 or possibly WebGL.

I've watched the video walk-through for 483 and I'm still not seeing where they're getting the five digit code from.

That was a tricky one for me too.
Apparently the clue is

on the window. You need to fill in the missing "blanks" under "SANTA".
If you're still lost, the answer is

If there were dashes rather than dots under "SANTA", I think it would have been a better clue.

For years you've provided nothing but weekly japanese escapes but now your "need our help"? Thanks but no thanks.

While we've been away: Stages are now officially themed and come in sixes but only half of them are free. I guess that means non-Patreons have no need to pick up all the Monkeys, but you might as well since it's in the name of the game.

Stage 483: The Search for Real Christmas

More a warning than a hint: you'll need some general knowledge of Christmas to solve these puzzles.

You're standing outside a shop but other than the window, Santa is nowhere to be seen. Beside the locked door, a brick is protruding slightly. Two people are having a miserable time, one hungry and one cold, and there's nothing to help them in the bin or the drain.

Pick up 5 coins, 2 Mini Monkeys and an ornament bit, then pop the lumps of snow to find another 3 coins.

The code for the keypad isn't Santa, it's the dots below that. Those dots suggest that you need to complete something…

The dots represent the Claus in Santa Claus. The buttons you need to push are

The lit fireplace is surrounded by a locked box and wall panels on the left, and some drawings next to an old man studying at a desk on the right.

Pick up 5 coins, 2 Mini Monkeys, and a newspaper and candle, and don't forget the fire hook beside the fireplace. After all that, you can take one more coin from the floor.

(That brings your total to 14 coins and 4 Mini Monkeys.)

You aren't going to get any more clues for the leftmost wall panel, but you can already answer based on

Or if you're not great at recognizing symbolism: try to spell out a word with the letters available.

The code is PAGAN.

Combine the ornament bits and insert that into the box beside the fireplace to find canned soup, another coin and Mini Monkey.

Light the candle in the fireplace, then go outside, toss the newspapers in the bin and light them.

The now-warm guy releases a Mini Monkey and a wrapped package.

Use the fire hook to lift the drain cover outside, which gets you a pocket knife and a coin.

Use the knife to remove the loose brick, which gets you a coin and Mini Monkey.

Use the knife to unwrap the package and find a small key. That key unlocks the wall panel which only contains 1 coin.

Also, use the knife to open the canned soup.

You still have the knife, which means you can use it once more:

Open up the right side of the desk to find a coin.

You should now have all 20 coins. Give them to the old man who places a pot and Mini Monkey on the table.

Pour the soup in the pot, heat that over the fire, pick it up and give it to the hungry person outside. Now everyone is happy!

(Take the last Mini Monkey. Looking in your inventory, you find that the clue from this stage is S.)

You're standing outside a scary-looking cave with an unusual door. Pick up the locked box, then 10 rods, a wooden handle, a stone tongue, a gem half and 3 Mini Monkeys. All that's left are two round code devices and a snow mound.

Go left to find an equally scary cave with a note beside it. A priest carrying a devil asks for a bundle of sticks. Pick up the snow shovel head at the bottom left, and then 8 rods, 3 Mini Monkeys, and the other gem half. This leaves three more code devices and a rod above the cave face.

Fit the handle to the shovel head, and use it on the snow mound to dig up a face part and a rod.

Also combine the gem halves and put it in the box to get some string.

The note shows you three codes which translate into faces:

But since it may be difficult to remember those faces, let's translate them to mouse clicks right now:
34315 clicks
23554 clicks
53423 clicks
(all starting from blank)

Right now, you can only use one code: the first one.

Insert the tongue in the left cave and pull it down. If you've entered the code correctly (from left to right), it will open.

You get a Mini Monkey and a rod.

That completes your collection of 20 rods. Tie them together with the string and give it to the priest to get a chain and a Mini Monkey.

Hang that chain above the left cave face, and use the second code. That gets you another face part and Mini Monkey.

Combine the two face parts and place them in the right cave, and use the last code. This releases some beasts and the last Mini Monkey.

(And the clue from this level is O.)

You're standing outside a snowman army base. These orderly snowmen don't leave much around, but you can still pick up a locked box and 3 Mini Monkeys, examine the clues, and talk to both snowmen.

Take the knob on the nearest stone wall.

Use the clue from the tower, gate and note to unlock the keypad on the gate:

The grid on the note refers to the keypad, so that each point of the star is a digit.

In the order of the colors on the tower, that would be
64297

The gate opens. Pick up a canister nozzle, spade and Mini Monkey.

Use the spade on the snow mound at the bottom left to find a medal star, and then insert that into the box to find a key inside.

Use that to open the door.

This room has a big red barrel of fuel, a locked panel in the front and a hole on the right. Pick up an empty petrol canister, 3 Mini Monkeys, and a wooden block part.

Attach the knob to the barrel, then fill the canister there, then attach the nozzle to it, then use that on (the back of) the vehicle.

Now that the vehicle is gone, you can pick up another block part and Mini Monkey.

Combine the block parts and place them in the right wall. Take the scope.

Also use the remaining clues from the game to unlock the wall lock:

The top and bottom rows of the note represent the words on the gate.

So the squares with 1 to 4 lines spell out
WORM

Take a rifle and another Mini Monkey.

Combine the scope and rifle, and give it to the sniper to end the stage!

As snowmen leave the stage, you get a holiday greeting, a Mini Monkey, and the clue for this stage (which is K).