Two years ago Rinnogogo released the escape MOMO (published in WE N°251, still playable) and now we've got the game's remake. It's different - the graphics are new, the soundtrack as well, some puzzles have changed, some stayed (almost) the same and some are completely new. Overall it feels more like a new game - depends how good your memory is, though. 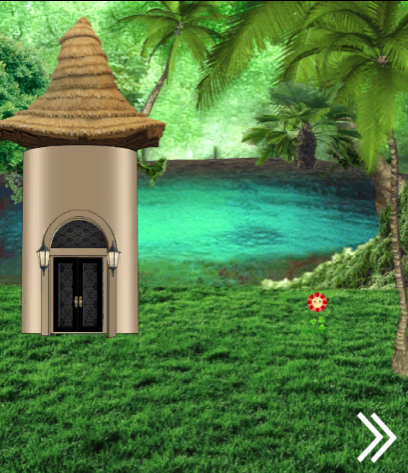 The theme hasn't changed, again you start at a special place where certain wishes come true, but this time the place looks less like a crematorium lobby. It's friendlier and lighter, and offers more rooms to explore though the game is a bit shorter. Your objective is to find a door which leads to the island where happily live forever those who passed away, and among them Momo, your kitty.
The graphics are remarkably better - well it's been two years of hard work between the games - and the puzzles easier. Not because you may have the experience with the original, but the clues are clearer and more intuitive. This makes gameplay more fluent.

The game has the hint system - the original didn't have any - and very good playability. The only thing that might seem better in the previous version is the orientation of the gamescreen. The horizontal orientation is much more comfortable when playing in browser! But that's just a detail - the game is lovely.

Rinnogogo must be listening to users. On a previous escape of theirs, I complained that a sudden change from clicking to dragging things around was not intuitive (something about a barbecue grill, as I recall). Here, they explicitly tell you that some things can be dragged—that helps!

I like the changes in the new version, particularly the in-game camera. That saved me some scribbling! Better have the tissues handy, though—this one is another lovely tearjerker.  😢

669 Views
0 Comments
jayisgames.com— Video games are an excellent way for students to stay focused. They allow students to relax and unwind after a long day of studying. They're also great for making new friends if you play with others....  ...