A new point-and-click adventure game has arrived from Phoenix Online Studios and Jane Jensen's (of Gabriel Knight fame) Pinkerton Road Studios. In Moebius: Empire Rising, you play handsome yet awkward Malachi Rector, a genius with a traumatic past. With his astonishing eye for detail (he could give Sherlock a run for his money), Malachi has made a name for himself in the high-end antiques business by being able to spot a replica from an original a mile away. He's (mostly) satisfied making the big bucks in NYC this way until he's attacked on a business trip, and upon his return is contacted by a mysterious new client from a mysterious government agency with an even more mysterious job request. Instead of analyzing an historical artifact, he's asked to use his historical prowess to analyze a person to see if she resembles any well known historical figure. And when murder is involved, Malachi is even more confused as to why the government wants his help. There's more going on here than meets the eye, and you've got to figure it out. 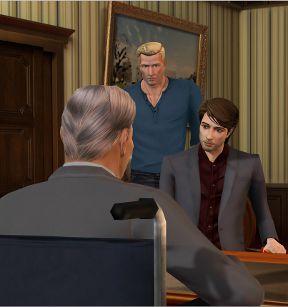 Point and click the cursor where you want to walk, or double click if you're impatient and want to instantly warp to a location on the screen. Access the menu, map, and your phone from the tab in the upper left of the screen, and your inventory on the right. Your phone holds all the important details for each of your cases, and lets you search, call, or text when needed. While your inventory is open, use the icons available to examine an object or try to combine items. Move the cursor around the screen to see which objects or people you can interact with. If you want to make sure you're not missing anything crucial, hit the [spacebar] to highlight all interactive objects.

When you click on something, a menu will appear around the cursor showing how you can interact with the object. Depending on what you are clicking on, you can do the usual adventure game interactions such as look at or talk to, or take, but sometimes you have a different option: analyze. This puts you right in Malachi's shoes and allows you to make snap judgments about people based on clues that only someone who's used to tracking such small details might notice. Does someone have a sharp gaze because they're angry? Or because their highly intelligent? Use contextual clues to figure it out. 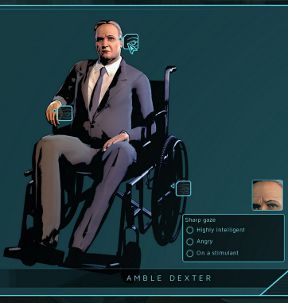 This analyze function comes into play in other ways as well, in the form of logic mini games as you encounter antiques and people during the course of the game. There are some inventory puzzles as well, but they don't employ the common "adventure game logic" but actually make sense here in the real world, as is fitting for the story. And make no mistake, you'll be in it for the story which will grab you early on and compel you to keep playing to see it through to the end. How else will you find out what exactly the moebius theory is, and how are you involved? There are different dialogue trees in some situations that allow you to advance the story in different ways. Though the end result is always the same, (though there are ways to die before you reach this result), it's fun to be able to have more than one option so you can reply in a way consistent with how you see the character you're playing. While the background art is lovely, spanning the globe from downtown New York to the striking vistas of Paris and Venice and more, the animation isn't quite up to par. The walking and interacting can sometimes seem a bit too unnatural. However this is offset by the excellent voice acting and wonderful soundtrack. If you like a story intensive experience that make you use your brain, Moebius: Empire rising is a game worth your time.

Windows:
Get the full version (GOG)

I strongly suggest to avoid this game.

The mechanics are so horrendous that playing the game becomes a chore:

- Everything is VERY slow.

- There is a delay for about everything (changing screen, after a character animation, after a dialogue). The fade-in/fade-outs are too slow as well.

- You CAN'T pickup objects if you don't now what to do with it. Realistic, isnt'it? At first glance, it seems so, but eventually you realize that travelling from Central Park to 110th avenue to pick up a pair of scissors dooesn't make sense. So basically, you end up revisiting locations tens of times only to pick up basic objects.

- 75% of the game is about solving pointless puzzles, and onyl 25% is about the main plot.

- The main character is extremely bland. And the character 3D model is really bad (they messed up his shoulders, he looks like the Hunchback of Notre-Dame when he should be extremely handsome).

- Some scenes do not fit with the character. Your character is supposed to be very intellectual, and yet, one scene is extremely violent (not physical violence that much, but what he says does not fit at all).

- There is a MAZE level. Combine the maze with extremely slow animations, and you'll want to throw your computer out the window. I stopped playing after this level.

- The story starts with a good premise, but it eventually becomes quite boring. Also, you character have some supernatural powers, which were not necessary in the game.

In conclusion, this game is bad. I can't believe Mrs. Jensen approved a game like this. Hopefully this will not prevent her from making other games, as the Gabriel Knight series was very entertaining.