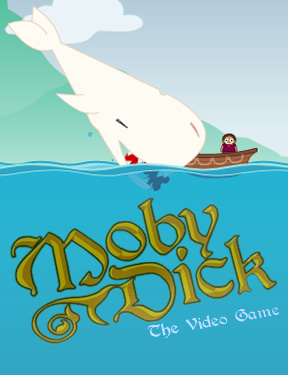 I'm going to tell you a secret. I've always wanted to be one of the scourges of the sea. I've longed to glide gracefully and silently beneath the waves, devouring anything that comes near my deadly maw. I would reign over the seas and oceans as suzerain and all who doth sail or swim in my kingdom would do so with fear and respect. The foolish ape called man would try to kill me, of course, but I would rend his flesh with teeth like razors and smash his ships to pulp. As they died, some drowning, some half-eaten, the water turning red with their blood, they'd scream and curse my names: Leviathan! Jörmungandr! Cirein cròin! Yeah... it'd be pretty great... and that's why I'm so excited about Moby Dick: The Video Game, a new release from Mostro Games and La Ventanita Studio.

Now, I've never read Moby Dick, I'm not a fan of Melville. Well, I really enjoyed "Bartleby, the Scrivener," which I think would make a great game. Anyway, I'm pretty sure this adaptation, while abridged, is very faithful to the source material. The main character is the titular Moby Dick, a very hungry white whale who longs to jump up to the stars and snack on yummy, tasty aliens. Just like in the book, you control the whale with your mouse and he dutifully follows it wherever it goes. When your purple BOOST meter is full you can left click with the mouse to get a momentary boost to your speed and power. This will come in handy when you want to reach those little green men.

It's not all about eating, though, you'll need to keep an eye on your three meters: health, air and hunger. Most of the meters are self-explanatory, but there are some things you'll need to know. You can increase your health by eating, and different foods will give you different growth bursts. Fish increase your health a little and sailors increase it by more. If you run out of air you'll start to lose health, the same goes for hunger. Thankfully, you'll be able to take advantage of the ocean's greatest natural resource: power-ups. There's power-ups to restore health and air and plenty of fish to ease your hunger. There's also power-ups that boost your growth, both in health and size. 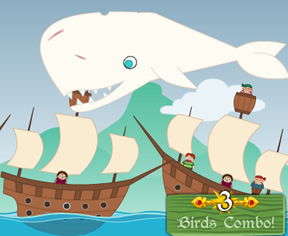 You see, you'll start off as more of a Baby Beluga than a Moby Dick. You'll barely be able to jump out of the water and most fish can outswim you. So, you'll have to bulk up by eating some humans. There's a couple ways to separate man from his ship. You can come up from the deep and nudge the bottom of the boat and when you get bigger you can slap them with your tail or land on them after a jump. You can grow up to 100 tons (or 2,000 health points). Of course, the bigger you get the hungrier you'll be. For awhile all you have to do is worry about surviving the spears and cannonballs of sailors, but eventually you get a new enemy: your metabolism.

Analysis: Even if you don't have disturbing fantasies of being a sea monster you'll find Moby Dick: The Video Game a lot of fun. It's a survival game, so the only goal is to, you know, survive, but I found myself continuing to play it on and on. There's achievements you can earn, but the real fun is just in getting big and wreaking havoc. It's understandable that there's a size limit on your whale, but it's also kind of a shame. It's be great to keep growing and growing to a ridiculous size to keep having something to work towards. Even after you hit the size limit the game continues to be fun, though. I kept playing way after I had enough for this review... and kept playing even while I was trying to write the review.

The controls are simple and smooth. In the beginning it's a little confusing because the instructions will tell you that you can jump out of the water, but it seems you can barely break the surface. That changes as you get bigger, so don't worry. The only minor snag in the control is that sometimes you'll be trying to gobble up a power-up or sinking sailor and because of your angle you'll just end up circling it. This is easily fixed by making another approach at your target, but if you desperately need some health it can be annoying. Other than that the controls are great and their simplicity is part of what makes the game so easy to pick up and so fun to play and play and play.

The art is simple and charming, especially the way your whale seems to always be smiling. The difficulty is decently balanced, but it is challenging and if you're not careful you can die very fast. All in all, Moby Dick: The Video Game is a ridiculous amount of fun and a very well made game. Even if you don't care for survival-type games you should give this one a try.

Also, my Bartleby, The Scrivener: The Video Game is officially copyrighted. I'm thinking maybe a choose-your-own-adventure with only one choice.

Yes, but I hold the rights to the pen-and-paper RPG - Bartleby: The Declining.

I could copyright a game... but I prefer not to.

Fun game, but it would have been better if they had included keyboard controls instead of just mouse... I find myself clicking and moving the mouse out of the window constantly!

Wow, JIG, 0 for 2 today, a banner day. One game so hard it's unplayable, and a seond that just doesn't load.

[Sorry you were disappointed today. There have been a LOT of reports lately that Flash games aren't loading. I blame the Flash Player as Adobe has been pushing out a lot of buggy versions. Make sure you have the latest version installed, and disable your browser extensions (ad blockers) since they are notorious for interfering with Flash games. There are no problems with this game in particular loading on all OS/browsers we have tested it on. -Jay]

I liked this a lot more than Reachin Peachin.
Maybe I just hate launch games.

Or maybe I enjoy doing backflips to smash boats before eating helpless sailors.
The whale's changing image based on health was a VERY nice touch.

LOL, Anyone else find spongebob's house at the seafloor?

The background changes. Once I had a bunch of treasure chests at the bottom of the sea.

Managed to eat a few

Interesting...
When you smash a ship, sailors fall into the water.

Smash a UFO without eating the alien...it sinks, too.

Can you eat the treasure chests??