We're back with more iTunes App Store gamery! Two of today's titles are iPhone ports of their bigger casual cousins, one a full-fledged downloadable game, and the other a browser-based adventure. Each one adapts extraordinarily well to the small screen and touch-only interface, and it's surprisingly handy to have them in a portable form.

We're still giving away iTunes gift certificates to cover the cost of every game featured in the current Mobile Monday article. Simply sign-in with a Casual Gameplay account, leave a comment giving feedback about one of the games, then check back the week after to see if you've won. Simple! Congratulations to last week's winner, Rek!

Submachine - If you've visited our site more than a few times over the years, you've seen several games Mateusz Skutnik has been involved with. One of his best-known works is the Submachine series of point-and-click adventure games. Here is a perfectly-preserved touch-enabled implementation of the original game, ready to puzzle you on the train, lounging around at home, or in the corner at a big party with a bunch of people you don't like. 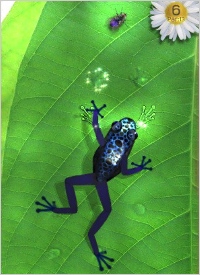 Ancient Frog - Slow and steady wins the race, and in this case, gets the bug. Move the little froggie's legs one at a time to position him near the fly. Simply touch and drag to place a foot onto the water droplets, but remember that the frog can't stretch too far. Use as few moves as possible to make it under par for each level. There are over 100 stages to play, six different species of frogs, and a number of unique environments to traverse, each as gorgeous and soothing as the last. A free Ancient Frog LE version is also available. 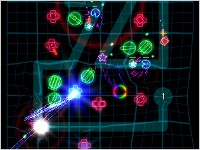 geoDefense - Tower defense games are gaining popularity on the iTunes App Store, and geoDefense delivers one of the most strategic (and visually stunning) experiences of them all. Place towers on each map to maximize its effectiveness against hordes of unique enemies. Your buildings can be upgraded just like most TD titles, and here you really have to decide which is more important: extra firepower, or bigger guns. The vector graphics are nothing short of gorgeous, and I can't get enough of the particle explosions and wobbling grid! The free geoDefense Lite is also available. 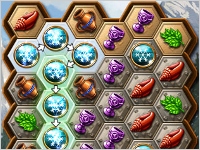 Azkend - I have a soft spot in my casual gaming heart for most games created by MythPeople. Azkend is a matching puzzle game released last year for PC and Mac, and it's a great fit for the iPhone's little touch screen. A team of archaeologists have discovered a relic in the far East, but there seems to be a curse attached to it. Group similar tiles together to create matches as you traevel from temple to temple on your way to return the relic, earning talismans that grant you awesome powers (hammer of destruction, anyone?) along the way.

Also Geodefense looks pretty cool If i had an ipod touch *COUGH*, i would get that. :P

These games keep on getting more and more sophisticated and polished, and the value keeps on increasing! Also, cheers to Mateusz for getting his games on this great platform!

Now, would you please update the app so it saves the state of the game if I get a phone call during play?

Wow! I like how Mateusz finally iphonized the submachine game!

Ancient Frog is a nice relaxing puzzle game. It reminds me a little bit of Rag Doll Kungfu, but because it's a puzzle game rather than an action game, the moving one leg at a time mechanic actually works.

The touch control is very good, and the pop's and click's provide good feedback to the player so that they know when they have successfully moved a leg.

I don't think there is enough depth to this game to warrant the $4.99 price tag, but it's a good little time waster.

Sweet I love this site even more now you guys have started doing Mobile Games, any chance you could do a special on Nokia 5800 touch screen games?

Wooo! Submachine!
First escape game I completed without a walkthrough and I still love it.
Enjoying the new application of it. Works really well, hope others follow suit!
:D

I decided to give geoDefense a go, and here are my impressions.

geoDefense is heavily influenced by geometry wars, art-wise. When enemies explode, the explosion deforms the underlying grid. It looks nice, and has good sounds, but I wouldn't call it original.

The gameplay is tough. I did like the added variety of a Laser turret (which can hit many enemies in a straight line). It gave many more strategic options. It's a TD game though, and this genre has been done to death.

Field Runners is much more friendly to the casual crowd, both visually and gameplay-wise. geoDefense is actually less complicated because there are no air units and because the units must follow a distinct path, but the difficulty in killing enemies and the AI's bad prioritization in enemy targeting causes a lot of frustration.

Does anyone know of any good RTS/4x games for the iPhone? Could we get some in the next Mobile Monday? :-)

I have a question for any iPod touch users in the community: I haven't spent the $10 to upgrade my 1st gen Touch to the new app which will allow me to download and play games. Does it work? Because it would be worth the ENTIRE TEN BUCKS to be able to play Submachine on my Touch! But I've heard mixed reviews.

Of course it works.
My friend has the first gen, and he had to do that.

Sarah, you might want to wait just a little bit before upgrading. The 3.0 is due out soon and you'll have to pay for that upgrade too. That said, the 2.0 OS and the app store work great. Been using my 1st gen touch since day one, and love it. In fact that's what I'm posting from.

The first thing out of my son's mouth when I get home is not "How was work?", but rather "Get any new games on your iPod?". He adapts very easily to the interface and even enjoys finding the new app icon amongst the others. Anyway, the various tower defense style games are usually a hit, but the geoDefense demo got a "Aw, cool!" for the graphics style.
With Submarine we're seeing a continuation of flash apps being ported to the iPhone and my concern is how well it makes the leap to the different interface.
I'm still a little blown away at the price points on most applications (not just games) at the app store. I remember similar titles for things like the Palm regularly going for $10-20.

the ancient frog one looks cute, but it would get old after a while...

I'm having lots of fun with geoDefense light. I think I'll spare a dollar for the full version, looks like a blast.

I always like the games that come with free versions! :D

@fuzzyevil - go with it - worth every penny, hard as god knows what, and cool graphics. easily worht the money.favortie game on teh touch

GeoDefense is probably my most played game right now. It sure is tough, but so rewarding when you finally beat the level.

I love any game by Mateusz Skutnik, and to see Submachine on the iPod Touch is awesome.

I'd love to see the 10 Gnomes series for the iPod Touch as well. It could do well to use the idea of buying additional levels/content later.

geoDefense is a stunning game. At first I expected all the light to get in the way of my actions, but overall it performed well. I really like the variation of tower types and the emphasis on using different kinds. My favorite tower is the laser one. It can get really good.

Anyone have any tips on geoDefense? Perhaps I'm simply bad at tower defense games, but I can't even beat the first medium level. I've tried lots of lasers, lots of green towers, and lots of mix-ups. Nothing seems to work. The slow-towers don't seem like they're worth the cost.

Huh, the price (of geoDefense) managed to jump up three dollars before I bought it. Phooey.