What would you do if the house of your dreams was haunted? And not just by some paltry poltergeist, but an entire infestation of unearthly manifestations? Well, if Bill Murray is unavailable, your next best bet is probably Hobblepop, 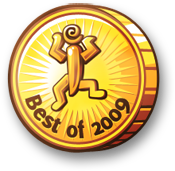 the tiny man who shows up at your front door with a lot of strange equipment and seems suspiciously knowledgeable about the whole ordeal. Mishap: An Accidental Haunting, from Namco, is a ghostly hidden object romp through one unbelievable house. With eight chapters, 32 hidden object scenes, riddles, mini-games, and a host of unfortunate spirits, the game is as fun as it is gorgeous, which is saying quite a lot.

The ghosts, as Hobblepop explains, have left a lot of spectral energy about the house, so you'll need to seek out items they've interacted with to draw them out. Discovery Channel would have you believe this is done with forty minutes of two grown men stumbling around in the dark yelling, 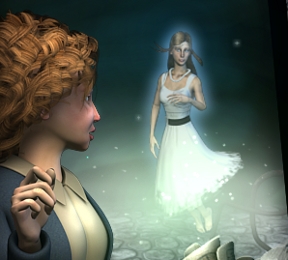 "Did you hear/see/smell that?!" (Spoiler: NO.) In reality, everyone knows the best way to make contact with the restless dead is by going through a list of items cunningly placed throughout the environment. That rubber chicken over there? Oh yeah, the ghost totally imbued that with spectral... whatever. Pick that baby up. Don't worry, it's not all junk; Hobblepop will use many of the items you find to build weird and wonderful machines to help you solve the chapter. If your cursor changes to a door, that means you can click on that place to move to a different area.

In each chapter, you'll uncover information that will tell you more about the spirit you're dealing with, but you'll also need to solve a riddle before you can reach them. Each time you finally coax the main spirit of a chapter out of hiding, you'll have to play a different mini-game to help put the ghost to rest. If you find a particular mini-game too difficult, or if you just don't want to play, you can hit "Skip Game" after the first round and move right to the next chapter. 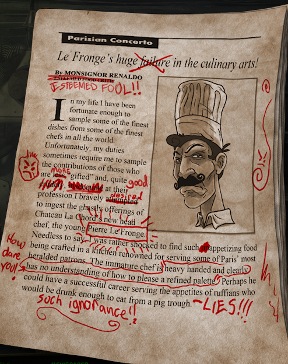 Since you spend so much of your time crawling through hidden object scenes, it's a relief to find that they're so well done. Rendered in delightfully twisted environments, objects are carefully and sneakily placed and do a fantastic job of fitting in. While Namco does a good job of hiding things in plain sight, it's often the environments themselves that work against you. Since the house is so charged with ghostly energy, in any given scene you'll find ordinary objects warped and twisted, and their strange movements do a lot to distract you. You may find yourself reaching for the hint button once it's recharged, but be careful... too many mis-clicks and you could get an unpleasant surprise.

In addition to your star specter, each chapter also features five more ghosts you can track down using Hobblepop's device and playing a game of hot-or-cold. They don't impact the story, but most of them have an interesting story to tell. While exaggerated and deliberately ridiculous in their design, some of the central storyline ghosts are a little, uh, ghoulish, and might upset some younger children.

Analysis: There is a story at work behind Mishap beyond "here there be ghosts", and your quest to get rid of them. As you progress you'll find a mysterious diary that will begin to provide insight into just why all these seemingly unrelated ghosts have taken up residence in the same place. Most of you will probably figure out the Big Twist™ a few chapters in, but who cares? All the characters are so wonderfully bizarre that you'll want to keep playing just to see the next one. It's like Thirteen Ghosts, but without the guy from Scooby-Doo, and the need to hide behind a pillow. I was delighted virtually every minute I spent with it, and there aren't many games I can say that about.

While some of the character models look a little stiff and unpolished, Mishap on the whole presents an absolute feast for your eyes. Environments are absolutely stunning. A particular favourite of mine was the foyer, with its jaw-droppingly beautiful grand organ. The soundtrack is also pretty easy on the ears, with catchy tracks that fit each locale perfectly. And while it also features what might be the worst fake French accent I've heard all year, the voice acting is on the whole well done. 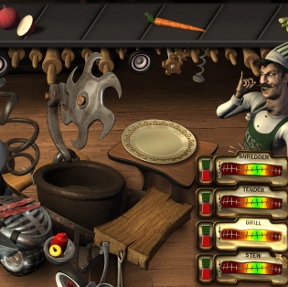 I have to say, I really appreciated the attempt to break up the gameplay by introducing the various mini-games at the end of each chapter, but it doesn't always work, and some are definitely more enjoyable than others. One, for example, involves recreating a complicated recipe by working from a list of instructions with a machine that looks like it would probably prefer to be tenderizing your face. It's weird, and it's mostly fun, and it's a bit of a let down that the others are just sort of... eh? Most of them are concepts that aren't quite as well fleshed out as they could have been, and feel a bit awkward in their execution, or simply fall back on being reflex tests. And, brace yourself; Mishap does feature one mini-game firmly entrenched in the defense genre, but the good news is if that makes your lip curl, you can always skip it.

If you're a fan of hidden object games, Mishap: An Accidental Haunting should be a no-brainer buy for you. You can expect to sink at least several hours into it, depending on how finely trained your ocular orbs are. Mishap throws all pretensions of seriousness out the window and gets straight to the ridiculousness, and the result is a very satisfying experience. If you're looking for a cerebral, thoughtful game to challenge your intellect, this one might not be for you. But if you're looking for a fun, funky good time, the sort that involves dancing around in your bathrobe, then Mishap: An Accidental Haunting won't disappoint.

Congratulations! All spirits have been captured. After playing the mini-game, you can enjoy the ending!

What exactly IS the story?

Liked this one. Looks fantastic, and not in the usual photorealistic way like most hidden object games these days, but with much cooler artistic presentation. Music is also really good.

There are some things I did not enjoy too much. The scenes load forever so walking into other room takes time. And the greenly colored text of found items looks very close to the color used on unfound items. Also, the minigames, while not the boringly overused memory or puzzle, do require quick reactions and timing which is somewhat weird.

Congratulations! All spirits have been captured. After playing the mini-game, you can enjoy the ending!

Although this game came out at the end of the year, it definitely wins my daily vote for game of the year. Innovative game design, sublime scenery, and endearing characters inject the "good ole' fashion fun" back into the Hidden Object genre.

I am very excited to see what Virtual Prophecy and Namco will colaborate on next. Many thanks from this gamer to companies that shake things up...whoever said you can't teach an old dog new tricks?

I really love this game and i think it's really addicting, but I need help with this:

In chapter 6, whenever I try to complete the riddle,

press the button and pull the handle 4 times

it never works! I'm not sure if it's something on my part or if it's a glitch, but i can't continue.
I also got the game from Big Fish, if that helps

Oh, i forgot, sometimes the sound won't work either(the characters won't speak in the cutscenes, or I won't hear a sound when I click on a item or find/click on a ghost) this has nothing to do with the riddle, but if anyone could tell me why it's happening i'd appreciate it.

Oh geez, sorry for so many posts, but I just read kayleigh's walkthrough, and it turns out I have to

again sorry for so many posts, but they really should make that more obvious

In the basement scene, does anybody know the password to the riddle that you have to type out on the computer?

i got to the level where the garage is,,im supose to press the button and pull the handle four times,,,well i did it to death and i cant get it to work,,anybody know why?? i checked the check list it SAYS i have everything done all the ghosts are collected,,i have checked EVERYTHING but when i push the button and pull the hanle four times,,nothing HAPPENS,,and that means i cant go on to the next level,,,HELP

Looks like I'm not the only one to get stuck on that riddle!
Anyway, Stacey, if you take a look at the

blueprints (if you have them)

Help. Got through the kitchen, pantry, freezer, dining room. Got the thing from the riddle. but NO MINI GAME. Help!

I'm through with EVERYTHING in the kitchen and the game does not advance to the next scene. What am I not getting??