If you don't think grinding is a dirty word when it comes to RPGs and you love dungeon crawling, Mitsuhiro Okada's completely free, simple, and devilishly addictive Minute Quest for iOS and Android is calling your name. You play a nameless hero sent off by a lazy king to... uh... I'm not sure exactly. Slay a whole bunch of monsters? Doing so involves advancing through screens of enemies as you journey forth from the castle, every enemy increasing in power the further you get. Just tap the left or right side of the screen to move, and move into enemies to attack. Slay enough and you'll level up, earning five points to distribute to your attributes. Die, and, well, you're booted all the way back to the castle (don't worry, you keep all gold, items, and levels) to start again, though you will eventually unlock a means to speed through places you've been before. As you slaughter your way to the right, you can find chests with different monster pets that provide bonuses as well as helping you fight, and you'll discover different shops you can buy new equipment types at as well. Though it looks easy and even too simple, behind its carefree retro charm Minute Quest has a surprising amount of depth and nary an in-app purchase to be found. 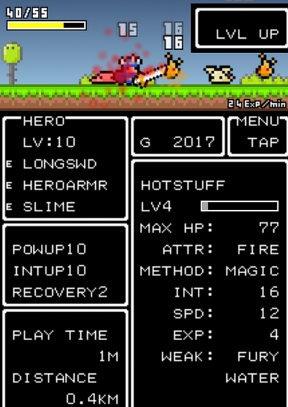 So what makes Minute Quest more challenging than it seems? Well, largely it's the addition of different monster attacks and weaknesses. Weapons deal different types of damage like jabbing and bashing, for instance, and monsters can be weak to specific types, in addition to dealing specific types of damage themselves, even elemental magic damage. Just tap on any enemy onscreen to see their statistics. As such, it's important to consider your equipment at every opportunity, since you can only change your loadout at certain locations. Damage type and resistance plays a huge part in how easy the game is, making you pick your equipment beyond merely what has the highest numbers, and the game is good and giving you just enough opportunities to swap your junk around when you need it.

That being said, Minute Quest is still very, very grindy, from levels to money, and with the lack of any sort of story or even additional gameplay mechanics, it gets repetitive very quickly. For some reason, I was also unable to manipulate the volume through the use of, y'know, my phone volume keys, and had to change it through the game's option menu, which is a minor but strange annoyance. Still, the game's simplified approach to hack-and-slash style RPG gameplay makes it oddly addictive, and the colourful retro visuals give it a lot of charm as you keep stabbing (or burning, or smashing... ) to see what you'll encounter next. It's a great example of how to make simple, streamlined RPG action that's perfect for pulling out of your pocket whenever you have a few minutes, and the fact that it's completely free is just the icing on the cake. With updates of new monsters and items coming all the time, Minute Quest is a fun and breezy little app that might just steal your heart and your spare time.

I've spent obscenely great amount of time with this game. Later equipment combos unlock auto-running ability which removes the need to hold your hand on display for the game to progress - this provides lots of automatic grinding.

Grind, grind, grind, grind, grind. I played this one a while back when I was searching the Play Store for "idle" rpgs. After playing it for a few days and getting up to level 130ish or so I decided to do some Googling to find out when the good item drops show up--found out I had a long while to go before I got anything decent.

Gaining only 1-4 gold per enemy when stuff cost so much was a tipping point for me--I just couldn't keep interested long enough to hold out for the "auto run" and gold boosting items.

It's a game that starts out great and keeps you hooked for quite a while, but there comes a point where it just starts to feel like a chore to keep grinding for gold to afford the items.

Not a bad game, but it is VERY grindy. I just passed level 2,000, which based on other players' experiences will probably be level 10,000+ by the time I've farmed enough XP to take down the biggest monsters...and now that I basically know my game plan, I'm not sure I'll have the patience to see it through.

BTW, I don't believe this works on Android, but for iOS users: I ran across a very cool trick that leverages the in-game ad of all things to confuse focus and simulate a keypress, so you don't need to waste gear on the "deathmarch" ability (or drop a hunk of metal on your phone) to do auto-farming. Google "how to deathmarch without deathmarch" (with the quotes) for details.

Take the time to find some good combos (they are available fairly early)... and it won't seem nearly as grindy.

Oh, I did...there are some nice tables out there that list the hundred or so major combos of interest, and I've got most of the useful ones that are possible up through 18km, from leek/leaf and woodswd/kendo/p.shroom to the nifty ones with scissors. Still seems grindy. ;)

> Dora— Rovio's Angry Birds go turn-based in this casual strategic RPG as you journey across islands trying to recover your eggs against challenging foes while finding new party members and classes, and crafting equipment. Though free-to-play for Android and iOS, a few frustrating mechanic choices and always-on requirements hamper the experience.  ...

> Dora— It's not the Doctor Who game you may have been hoping for, but this free match-3 RPG for iOS and Android offers a ton of unlockable characters and battles with enemies from the show. With gorgeous artwork, simple and addictive gameplay, and a lack of the usual free-to-play frustrations, Doctor Who: Legacy is still enjoyable if not quite what you'd expect.  ...

> Dora— Hexage delivers that rarest of beasts, the mobile action RPG that's as easy to pick up as it is hard to put down. With controls that are simple to learn and a myriad of attacks at your disposal, Reaper is a stunning game with addictive battling and a lot of gameplay to slash your way through.  ...

> elle— Fairune is an action-puzzle RPG adventure much like the world where it is set: a place where illusion is reality and three spirit icons have gone missing, unlocking an evil scourge that generates monsters all over the realms. It looks like something you've played before yet eliminates hack'n'slash style combat in favor of solving puzzles. Instead of fighting, just walk over monsters and make your way across a maze-like retro environment, gathering the items you need to open new pathways until your ultimate goal: a showdown with three powerful bosses that will either end in victory or crushing defeat.  ...