When you think of Rovio's Angry Birds games, you typically think of hurtling limbless avians at precarious structures built by green pig balls, which a sentence I can't believe I just typed. What you probably don't think of are strategic turn-based RPGs, but they're aiming to change all that with the release of Angry Birds Epic free-to-play for iOS and Android. The gluttonous green pigs are at it again, having pilfered your nest full of eggs to feed their king, and it's up to you to go on a journey to bring them back! After all, just because you don't have legs or arms doesn't mean you can't pick up a sword and shield, right? (Don't... think about it too much.) You'll travel across the islands, doing battle with increasingly powerful piggies at every turn, finding new party members and equipment, learning recipes to craft powerful items, and much, much more. Though a tad on the repetitive side and slow to ramp up the difficulty, once it gets rolling, Angry Birds Epic is a surprisingly challenging strategy RPG at times whose simple pick-up-and-play mechanics and beautiful presentation make it a fine foray into the genre for forgiving casual fans... with a few caveats. Please note that this game requires an internet connection to play at all times. 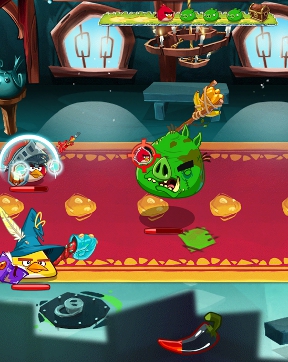 Although billed as an RPG, Angry Birds Epic is more a series of levels consisting of strategic battles. You tap to move around the map from stage to stage, and each stage is comprised of enemies (or waves of enemies) you must defeat in order to move on. Tap and drag from a bird to an enemy to attack, or tap the bird to activate its special ability. No two birds are created equal, and all of them have skills you'll want to take advantage of. Tap and hold on any bird (or enemy!) to get a look at their powers and what they do. Chuck the Wizard can attack all enemies for minor damage, for example, or you can have him enchant himself or another party member with a shock shield that deals damage when they're attacked. As you deal or take damage from enemies, the chili shape at the bottom of the screen begins to fill, and when it's filled all the way you can drag it on top of the bird of your choice to unleash their rage attack! If at least one bird survives a battle, you win, and the stars you receive based on how you did determine how many chances you have to win loot when you spin the wheel at the end of a fight. You can also level up from completing battles, which increases the health and attack of every birdie, and when you find trainers, you can purchase equipment that changes a bird's class and gains them new abilities!

You'll notice that the treasure you get from winning battles is, um... not very treasure-like, unless you live in some bizarre Flinstone-ian community where you can trade twigs and rocks for goods and services. These items are actually what you'll use to craft equipment, once you earn the anvil, and can be equipped to make your birds stronger. You can make weapons, armor, and off-hand items, and even craft more useful resources out of others, provided you've found the recipe first of course. After you craft an item, the game rolls a single die to determine any bonuses you might get... an increase in attack power, for example, or just more of whatever you're trying to make. In the same vein, you'll also eventually get a cauldron you can brew potions in to heal or otherwise help in battle. You can spend the gold you earn on certain upgrades or potions, or you can convert it into silver snoutlings (*giggle*), which can be spent on outright purchasing more resources. If you want more in a hurry, well, you can always pony up actual money via in-app purchases. The other in-game currency is Friendship Essence, which can be used to re-toss the die to get better equipment from crafting, among other things such as reviving party members, and can be either bought with gold, or solicited from your friends via optional social networking in case your friends aren't already sick of you asking for help with lost cows and candy. 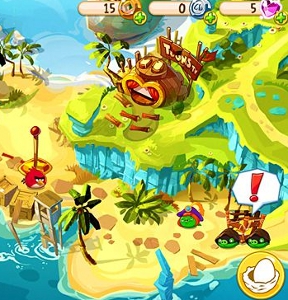 Analysis: Angry Birds Epic is one of those games I enjoyed more than I expected to, but was still frustrated by the things I anticipated being frustrated by. Since there's no real story to speak of or any gameplay whatsoever beyond the the combat, the battles have to be engaging, and for the most part they are, if on a more casual tier than most games. Die-heard strategy RPG fans will likely find things still a bit too simple for their tastes, and the game is slow to showcase a lot of variety, so you wind up hacking through encounters that feel only slightly different from one another due to simple enemy combinations. Still, for a game that looks so cutesy thanks to its vibrant cartoon style, it can offer up some surprisingly challenging battles that makes careful planning from turn to turn a must. Each bird's abilities feel useful for different situations, allowing you to set up combinations that can help take the sting out of a powerful enemy's attacks. As you get more party members and equipment, figuring out how to use each class to support the other gets more rewarding and gives you more options to play around with during battle.

At the same time, however, progression is just so very, very slow that it feels like the game is hampering itself. There are a lot of levels, sure, but as mentioned a lot of them feel similar, and the game as a result feels far more grindy than even an RPG should. Gold coins, snoutlings, and resources are dealt out slowly enough in small quantities that it seems as though the game is really leaning on you to spend money to speed things up, making this one of those games that desperately feels like it needed to be split into both paid and free versions. It's such a colourful, stunningly presented little game with casual gameplay that you might not mind paying a flat fee for it up front, but without that as an option, the microtransactions feel more obnoxious than reasonable when it comes to how often you may need to revive or even just re-roll for non-terrible equipment or loot. Couple that with the online-only restriction, which often seems glitchy since it repeatedly told me my tablet with dedicated wi-fi AND data had "lost connection", and Angry Birds Epic just isn't as easily addictive as it could and should be. There's nothing wrong with a strategy RPG with lower complexity since it opens the genre up to many more players who might otherwise pass it by, and there's a simple massive amount of gameplay here, with an extremely high quality presentation, to enjoy. If you can overlook its flaws, Angry Birds Epic has a ton of promise and offers a ton of levels that are just complex enough to engage almost any player, though some may find its restrictions and in-app purchase options too much to overlook.

I would have dropped a few bucks for this. But hearing that the game is slowed down to encourage IAPs, I will pass.