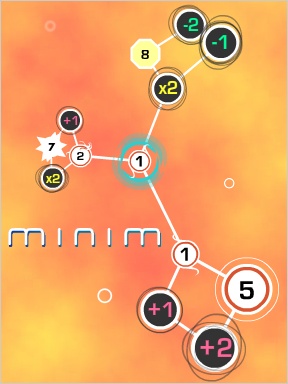 The last game we saw from developer Atomic Cicada (still waiting for a game that's actually about a giant rampaging radioactive cicada, by the way) was Grid. It didn't have any major new gameplay twists, but it had an exceptionally considerate user interface, and it looked so pretty I kept checking my hair in case it came over to talk to me.

Their gorgeous new puzzle game Minim goes a step further and crams some new gameplay ideas in there. The objective is simple, as it is in all great casual games. Each level shows you a molecule made up of number atoms and modifier atoms. Your job is to combine connected atoms until there is only one left, which then vanishes in a puff of total existence failure.

Combine two identical numbers to form the next number in sequence. A "3" and another "3" turn into a "4", for example, and then that "4" can merge with another, to become a "5". A modifier, such as "+2" or "-1", will just change a number by the appropriate amount. Later molecules introduce multiplication and division, and some spacial tricks, like atomic bonds that let you switch the position of two numbers. There are always two constants: a number on an atom can never have a value higher than "10", and it always has to be a whole number. No decimals or fractions.

Analysis: Atomic Cicada make a good-looking game. The important game elements are readable and clear even at a glance, and the user interface does an slick job of providing information without intruding on the playing space. Each new gameplay twist comes with a subtle notification at the bottom of the screen, and if you want more information, just click on the note to expand it.

Even better, your view of the puzzle is totally customizable. You can rotate a molecule any way you like (similar to the pseudo-3D pixel clouds of Coign of Vantage) by clicking and dragging on the screen, and you can even adjust the position of individual atoms. Also returning from Grid: the wonderful, life-giving, indispensible, unlimited, coquettish Undo Button (hallelujah, hallelujah). Here the puzzle is your enemy, not the interface.

It all takes place on a sophisticated stage made of red and yellow haze which, appropriately, is what you might see if a blood vessel burst in your brain. For the sake of your health, try to stay relaxed when the cuddly little math game starts beating the tar out of you halfway through its 35 levels. There's nothing wrong with the learning curve—it's smooth as a baby's bottom. You'll barely notice the difference when the game stops dispensing comforting hugs and starts in with the knuckle sandwiches. Yeah, that's how the cute ones hook you.

Very slick. Easy to understand, plenty of chances to experiment, fast level reset. And it's so very easy to manipulate the view to get the best look at the numbers.

Is it just me? Or is the gameplay reminiscent of the first level of spore. The swirly music and background...

It's a really swish game!
Thanks!

The Undo Button was a very wise choice. Without it, I'd probably have quit at Level 3 or so...

Excellent game, by the way. I love it.

Hrm, found one complaint - it doesn't remember what level you stopped at (or, at least it didn't for me).

Since it's too long to play through at once, that's a real shame, since I won't be getting any further than I am (27), because I don't want to start over.

I'm currently stuck on lvl 23, anyone able to provide any assistance? Thanks.

Overzealous: If you load the game up again and click level you should be able to pick any level to start on that you've gotten to.

Keep up the good reviews!

Stacy: Since the Flash version was only just released on Thursday, my guess is that the app hasn't yet gone through the Apple approval process.

I've heard from some developers that it can take weeks for an app to appear in the store.

after a bazillion tries solved it(23), that one was sure annoying
Hints then solution

Leave the 5 and 6 alone til the end

All the other levels have been fairly linear.

Help for 35
Hints then solution:

The ones are not used until the very end.
Solution:

Oh man, this game is awesome! It's sort of eaten my afternoon. Oops.

I'm really, really stuck on #29, the one that looks like a hand. Could anybody point me in the right direction for solving it? Thanks!

...of course, I work on the same puzzle for over an hour, and my NEXT TRY after posting for help, I figure it out!

Start on the ring and pinky fingers and get down to a total of four, then work on the pointer and middle fingers and get to four there as well. From there, you can connect them to make the palm's five.

34 is throwing me for a loop, which is disappointing because I made it this far without help, haha.

I keep on winding up with 5-2, 7-4, or some combination of number-3x multiplier that I can't do anything with because number > 3

And the post-solve strikes again.

Gosh!!I'm stucked at level 33... I've tried everything... it's too dificult to undo that little guy.. anyone can help?
Sorry about my bad english...

HEY! I made it. Just after I left my comment. Great isn't it?
Good luck to everyone!!!

Help on 33. This took me until I had read that someone else needed help, then I figured it out. :)

Stuck on Level 23 - previous Spoiler comments are NOT clear or logical. Cannot follow them. Can anybody else explain the solution better?

The 4 comes by multiplying 2 and 2

The other three comes from 9/3

Please, I'm stuck at level 23. I followed the idea of the last comment. But still, I'm always left with the x3 and another number. More help, please

I know this sad, but I am stuck on level 5. Can someone please help?

"Is it just me? Or is the gameplay reminiscent of the first level of spore. The swirly music and background...

It's a really swish game!
Thanks!"

Well, the atmosphere is very much like Spore's cellular stage (as well as Spore Origins in turn), but the gameplay? Not really. Spore Cell Stage is arcade gameplay (with a dash of strategy, when considering creature diet development, at least), this is distinctly puzzle.

Help for the person asking about level 27

You will end with two 6's

Beginning with the 2 in the middle of the string, multiply it by 2 then combine the two 4s you have between the two plus signs to make a 5; combine the two 4s on the right side of the string; now make the 5 just created a +5 and add it to the other 5 for 10; subtract 2 from the 10 which gives you 8 and divide by 2 = 4; now moving to the left side -- combine the remaining plus sign and the 2 and combine that with the 4 = 6; now multiply the 3 with the x2 and you should have it

For Daedskin needing help with level 5.

The molecule is so confusing I am don't think I can explain it step by step; however - all of the numbers except the 5 will eventually become a 5 ending the game on a 6

The remaining 1s and a single 2 work out to become a 4; you might need to hit the undo button until you match the right 1s

I am stuck at 36...have been for weeks! Any hints are appreciated!

Anybody able to lend a hand on level 40?

">https://clashroyalhacktool.com/clash-royale-cheats/”> Clash Royale cheats
I was perusing your article and thought about whether you had considered making a digital book on this subject. You're composing would offer it quick. You have a great deal of composing ability.