Imagine if mining in real life was more like it is in cartoons and video games. No cave-ins! No danger of black lung! Mine cart trails like roller-coasters and the caves littered with pre-cut jewels the size of fists! The promise of those gems alone would probably make it a more desirable career than "movie star" or "astronaut." Of course, cartoon-mining is still not without its hazards, as Minerics proves. This puzzle platformer shows us that even the jolliest and most primary-colored bands of cartoon miners still have to deal with stalagmites, dynamite, and even evil jackhammers. And in the vein of the Fireboy and Watergirl series, you'll be controlling them two at a time, one with the [arrow] keys and one with [WASD], as they explore caverns in search of bright, shiny, floating treasure. Or rather, you can control them two at a time. But Minerics encourages you to make it a two-player affair, with all of the bickering, shouting, and fistbumping that implies. And isn't everything better with friends? 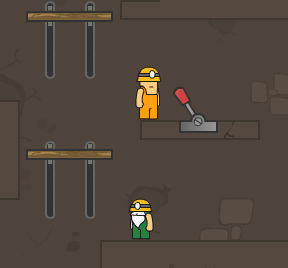 As a puzzle platformer, Minerics is fairly simple... all you have to do is run, jump, and get both characters to the exit, and there are no real enemies to contend with aside from a few dangerous clumps of stalactites. Most of its puzzle solutions come down to logic and brainpower, and few of the levels, if any, will really test your reflexes. If you play it by yourself, it's a cute, short diversion that you can power through on your lunch break, especially if you're a Fireboy and Watergirl fan eagerly hunting for more good teamwork games. But by giving you a handful of different miner characters to choose from, and giving your second character the default title of "Player 2," Minerics nudges you in the direction of playing it multiplayer. And as a collaborative experience, it actually works pretty well! The slower-paced levels give you and your potential partner more time to discuss who should go where and who should tackle which tasks, though the color-coded gems in each level do suggest a distinct path for each character. Though none of the puzzles are too tricky, two heads do tend to solve them faster, and when both parties contribute to figuring out a solution, it does make you both feel pretty awesome. The game's physics do feel a little "bouncy" at times, and the game still isn't especially long or challenging. But the puzzles are complex enough that, with a cooperative friend in tow, it makes for a brain-teasing good time.

Kinda reminds me of Fireboy and Watergirl.

Kind of pretty much EXACTLY like Fireboy and Watergirl. Not that there is anything wrong with that!