The sneaky kitty in first time developer Sylviepouetpouet's dangerously adorable escape game Mimou Escape might be one seriously clever feline, but even though it seems like the only thing standing between it and a sumptuously full food bowl is a flimsy carrier door lock doesn't mean things are going to be easy. Luckily, even if your emergency ball fails you, there are clues hidden everywhere for this resourceful cat to help it escape! Use the navigational bars that pop up when you mouse over the edges of the screen to change the direction you're facing. When your cursor changes, click to interact or pick things up, and click on items in your inventory to select them for use. 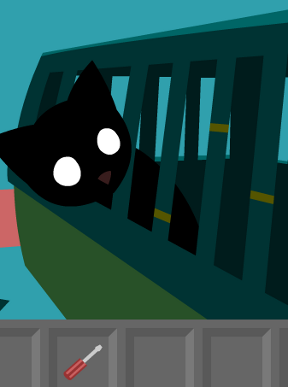 Mimou Escape is very, very short, with only one ending if you don't count the optional red herring. But it's also very, very well done, so we'll forgive it. While the puzzles won't cause a lot of brain strain, they're simple and smart with clues that require both observation and thought. Easily its biggest selling point, however, is how beautiful it looks, with clean, stylish animation, a wonderful sense of humour, and a bouncy soundtrack to tie it all together. It probably won't keep you tied up for more than five minutes, but Mimou Escape is one of those stylish little games that will brighten anyone's day, and we can only hope there's more to come.

Thanks to NicoP for sending this one in!

Now you're well prepared to make your escape.

It's scratched into the back wall...

The answer is written on the bars outside the cage...Numbering the position starting from 1 (lowest) to 4 (highest), the solution is:

Now you're well prepared to make your escape.

It's scratched into the back wall...

The answer is written on the bars outside the cage...Numbering the position starting from 1 (lowest) to 4 (highest), the solution is:

Sometimes these simple, cute, logical games are the best. So cute.

:3
That was absolutely adorable. And just a perfect, cute little game.

That was cute! It's a nice change of pace to be a kitty instead of a person.

The key and screwdriver are red herrings...there's an even shorter route. The very basics of the game are: get the bent wire, get the coin, find and read the piece of paper, push out the bar, look at markings outside the crate, use coin on the lock. ;)

Actually, Sylviepouetpouet (bluntly translated honk-honk Sylvie) is a FRENCH creator of... well, about everything, a mix of girly-sexy-trashy-gory videos, animations, installations, compositions and so on.
So cuuuuute, as many folks say !!!
Anyways, she has a blog you can visit, even if you are french-impaired !

Paris : still damn cold and grey (explains my mood + my gf has dumped me... )

The very first escape game that made me laugh :)

Cute, but it's all pixel hunting, the most annoying part of escape games.

This was adorable, and terms of game-play, very well-designed. I have some little problems in terms of the game logic, though. Why would anyone put a padlock on the INSIDE of a their cat's carrier? Also, when you break off one of the bars, you should be free. Everyone knows that if a cat can get its head through a space, it can get its whole body through. :P

Cute, too short tho.

You don't even need to get the screwdriver.

Really enjoyed this one - at least two red herrings but love the artwork :)

5,360 Views
3 Comments
chrpa— Jayisgames needs your help to continue providing quality content. Click for details In a popular Neat Escape's restaurant you went to the restroom, and stayed there. Not voluntarily. You order is being prepared, you're hungry and thirsty but you can't...  ...

1,781 Views
5 Comments
chrpa— Jayisgames needs your help to continue providing quality content. Click for details Welcome to Mobile Monday! The first comes an adventure escape from a pyramid by playPLANT (LIBERTY PLANT Inc.) and it's an exciting one - the pyramid collapses...  ...