What the dickens is this? (Just wait, that was clever, you'll see.) Charles Dickens (told you!) is in danger in Game Forest's hidden-object adventure Midnight Mysteries: Ghostwriting, and someone doesn't want you interfering. Seems he vanished after receiving a desperate call for help from his friend Washington Irving, and though his daughter Mary wants your help finding him, the super-fast and supernatural mysterious masked character lurking in the shadows really thinks you should mind your own business. This ain't your ordinary baddy either, since he can use books to travel to the locations described in them. Too bad for him, this ain't your first rodeo, and it's going to take more than magical book whirlwinds, forcefield green stink, a bunch of flaming jack-o-lanterns presumably filched from Norman Osborn, and an overload of vicious booby traps to throw you off the case. I got my own mansion, son! You'll use your foe's own bookery powers to hop from location to location, solving puzzles and hidden-object sequences, and getting a little help from your fine feathered friend along the way. 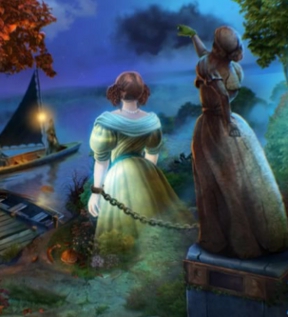 One minor annoyance is that Ghostwriting is filled with little animated flourishes when you interact with or pick up items, and you need to wait for them to finish before you can proceed with whatever you're doing. It's a minor nitpick, sure, but it gets frustrating when there's so many of them that it slows down the pace. Something perhaps more important to fans of the series, however, is that Midnight Mysteries isn't quite as straight-laced as it once was... when the series was originally in the hands of Mumbo Jumbo, it tended towards the serious side of gameplay, with hidden-object scenes typically only ever containing items that belonged in any given area and even gave you additional story clues, as well as heavily focusing on only presenting obstacles and puzzles that fit the story, for example. Ghostwriting, by comparison, is a bit more laid-back, and has you do things like help baby ducklings and rescue beavers. This isn't meant to convey any sort of disdain for the game or its more casual approach to things, just that fans who enjoyed the format of the earlier games might miss the tone of them here.

Judged purely by its own merits, however, Ghostwriting is still extremely well made, and not just in regards to how gorgeous and atmospheric it is. Both its puzzles and its hidden-object scenes tend to be multi-layered, and offer a remarkable amount of variety and logic, though I might recommend against setting your backyard on fire just because you can't find something in it. Perhaps Ghostwriting's best feature, however, is its flair for drama and storytelling. When was the last time I got a short musical number about love and sacrifice with ominous special effects that served to move the plot along in a hidden-object adventure? Never, that's when, and it immediately made me perk up and take notice. The plot actually takes a while to get going since you spend a lot of time trundling back and forth collecting items for every bit of exposition and fabulous cutscenes. Once it does, Ghostwriting proves to have solid storytelling chops, and is just about the perfect length at four hours or so for your average casual player, neither wearing out its welcome with excessive padding nor making you feel like you were shortchanged. Despite lacking the greater educational bent of its predecessors, Midnight Mysteries: Ghostwriting is still a beautiful, captivating supernatural adventure that's perfect for relaxing in your mansion with for an evening. I know you have one.