Okay. So maybe this looks a little bad. You come to in a dark, strange place, stumbling down a hallway that doesn't seem to have an end, only to find yourself trapped in a room where a little girl's voice tells you that you've been chosen to prove your worth to join her "sanctuary". And maybe this place is filled with cryptic symbols, vanishing doorways, mutilated dolls, and tripwires. But things could be worse!... right? In Mad Head Games' creepy new hidden-object adventure Maze: Subject 360, things are sincerely weird as you find yourself trapped and apparently at the whims of one twisted little girl who has no problem testing her "subject" against deadly traps. The last thing you remember is driving down a rainy road at night, before spinning out after narrowly avoiding a deer, and the more you stumble onward, the more you remember, but you'll need to keep playing your disturbing little host's games if you want to make it out alive. As you explore, you'll solve a plethora of puzzles, gather items from hidden-object scenes, find secret symbols and morphing objects, and, theoretically, find out the truth about where you are and why. With a flair for the extreme and the weird, Maze: Subject 360 delivers an over-the-top horror experience with gorgeous visuals and high production values, though not without a heaping helping of camp and tasty, tasty cheese. Though it might pile on a bit much for people who like their horror truly dark, fans of casual hidden-object adventures who have been craving something with a bit of teeth and some truly creative design will want to clear a dark and stormy night for this one. Captain Jumpscare... awaaaaaay! 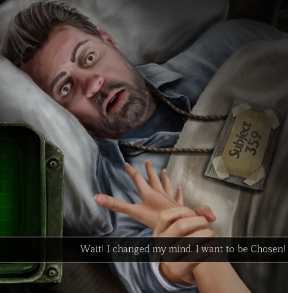 While the first chapter drags its feet a little with mostly standard mechanics and setting up the scene, though the entire segment with the pigeon room and the door beyond is pleasantly bizarre, the second chapter onward goes absolutely insane in the best possible way. Stalked by dolls in a maze containing your deepest fears with only a flashlight. Hiding beneath a hospital bed from a man with a syringe. Exploring a deserted town because all roads out endlessly loop. It's just a shame I hit the words "Native American Burial Ground" and my eyes just about rolled out of my head and out the door, well before we started piling on the dreamcatchers and random Native American symbolism. (The stories I could tell you about the mad giggling at the tourists who bought things at our local "Trading Post".) But while Maze: Subject 360 hits several tropes so hard it nearly bruises something, it at least has such a fantastic sense of style and character that you're kept engaged, wanting to see what happens next. Maybe it's a room of fire! Maybe it's needing to inject a stranger with some random drug you found in a dirty ambulance! Maybe it's giant baby dolls floating in an endless dark void! Whatever it is, it won't be nearly as creepy as the unintentionally dead-eyed kid you have to keep reading stories to! It's Maze: Subject 360's creativity and imagination, as well as its surprisingly good story pacing that unfolds more and more as you go, that makes it stand out from the pack. At around four hours or so, minus the bonus chapter in the Collector's Edition, it's a surprisingly robust game for the genre to boot. 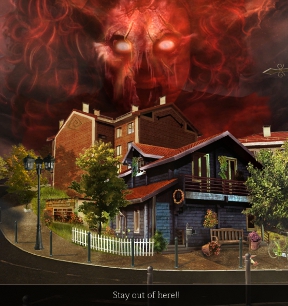 Gameplay-wise, Maze: Subject 360 is actually a little too simplistic. It's got a wide variety of puzzles, and even some fun twists on hidden-object scenes, particularly one that involves checking someone's various vitals and organs (bowels and toilet paper... really, really?), but it never really tries to challenge you. The gameplay very much feels like it's taking a comfortable backseat to the story and exploration, and while it balances all its elements like hidden-object scenes and traditional point-and-click puzzles nicely, it still would have been nice if it were as fleshed out as the atmosphere and the rest. There are too many minor objectives that feel like they're just there to pad the length of things, too much simplistic back-and-forthery when we could have been having more freaky doll mazes. The game touts its decision mechanic, where choices you make theoretically influence the game, but even making the wrong decision just means an instant re-do, and the rest of the choices are nowhere near as complex and game-changing as the promo material makes them sound. None of this is to say Maze: Subject 360 is functionally a bad game... quite the opposite. Maze: Subject 360 has rock-solid bones ensconced in the heavy, satisfying meat of a good story and atmosphere, making it the sort of thing you want to power through in one sitting. It's got plenty of intense sequences and fantastically executed scenes, and if you love horror with no reservations, you'll definitely want to fire up the demo for this one. Highly recommended.

3,664 Views
19 Comments
chrpa— Jayisgames needs your help to continue providing quality content. Click for details Hello, the newest Weekday Escape just arrived! We start (and end) with Selfdefiant's game; this week we postpone their invitation to Georgia and visit an old space...  ...