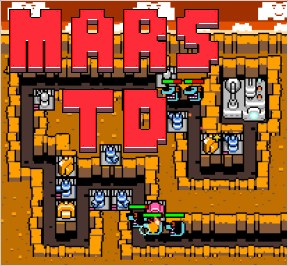 Ah, tower defense genre. How you taunt with your towers, your upgrades, your evolving strategies. How you draw the player in with simple creatures to dispatch with ease, then pull the carpet away to reveal how that carefully pre-planned strategy was full of holes. How you put shame to preparations and defensive design with the greatest of ease. And look — a giant walking octopus which is out of water and also on Mars.

Coated in retro pixelated graphics and pipingly sharp music, Mars TD by Taro begins in a casually simplistic manner: Select one of the two available towers, place it on the map, and complete level one. Get more coins, buy another tower, and clobber the aliens in level two. Repeat. From the simple beginnings stem two obvious strategies — buy lots of towers or upgrade the few which you already have.

The first strategy is strength by numbers. The second is simply strength by strength, but also comes with an interesting quirk. For each alien destroyed, you receive coins. Not only do you get to keep those coins, but that same amount is deducted from the kill-tower's upgrade score. A particularly deadly tower will soon be very cheap to upgrade. It's up to you whether to upgrade quickly, which is more expensive, or to leave a tower weaker for longer, which gives the increasingly strong aliens a chance to break through your defenses.

To purchase a tower, select it from the right-hand column, and place it on the map. Allow the alien bodies to pile up. When a tower is selected on-map, the top-most option in the menu is the Upgrade button, with the current upgrade cost. The lowest option is the Sale value. These either increase or decrease depending on the current strength and efficiency of the tower, so keep an eye on the numbers.

The middle option is Move. This lets you swap one tower with another, if you should so desire. This option is free between rounds, but the cost varies if you want to do it in-game. Moving to a new, unoccupied spot will require that you purchase a wall — this is the square option in the tower select menu — then swap it with a tower. When your towers have been set adequately, click the Current Wave button to start the round. If a level is running badly, select the button marked "menu" then the middle option to restart the level. Just note that this will cost you one of your Continues.

Analysis: The variety of towers, whose weapons increase in ferocity and ability with upgrades — for example a freeze shot comes from the second tower when strong enough — really brings an extra element of strategy into Mars TD. Depending on what you purchase and upgrade, and when, your resulting arsenal can be vastly different from turn to turn. Planning from the beginning and being able to modify your plans on-the-fly as you adapt to the current level's intensity brings added depth to the later levels. While the language barrier may be a tad daunting, there is nothing so frightening that a little clicksperimentation can't handle it. Besides, your enemies are walking octopi and disembodied rotating dog heads that bounce, to name just two varieties. What's not to like about that? Those with a penchant for strategy and a flair for retro will really enjoy this game. There is a lot to uncover.

How do you use the grey machine?

I still think METALIX TD is a better game. This one is pretty good, though.

Seboubou: Do you mean the big grey machine in the upper-right? That's your home base. It blows up if you let too many bad guys reach it.

I can't get past the wave with

even on easy mode, no matter what strategy I have tried. It's a really hard game, and the difficulty is compounded by the fact that the challenge ramps up so quickly. An enemy is introduced in one wave, and the very next wave, you have to combat a ton of them. Enemies move very quickly, and the freeze shot does little to slow them.

I like the mechanic and the idea of the game, and I was having a lot of fun with it. When realized that it was fundamentally unbalanced, however, it just became too frustrating to see my series of level five freeze towers at a choke point with an upgraded flamethrower and rail gun fail to kill even one enemy.

the only strategy I haven't tried is

but because the cost of switching back and forth during waves would happen so often,

it would ultimately prove an ineffective strategy - too costly to maintain long-term, upgrading the towers and purchasing new ones would become far too expensive, meaning you lose HP war with the rapidly strengthening enemies.

What are strategies that worked for you?

I know a bit of japanese, so I translated the keyboard shortcuts:

When a tower is selected,
A: Move tower (exchange positions with another tower)
S: Sell tower
D: Cancel selection

The game style is reminiscent of Nintendo Gameboy games, and the mechanics are simple yet fun. But I get stuck on wave 13 of easy, once the blue dogs start coming in companies and crowds.

I don't understand what the first tower that you can build is? Looks just like a lego block. It does nothing?

The first tower is a wall, quite right.

Its what you use when you wish to switch a tower to a new location. It only costs you $5 and can be destroyed soon after.

On Normal and Hard difficulties, where there is no set path for the bad guys, the wall is a cheap way to make a maze.

I'm with the first commenter, although I did manage to kill the first boss mere millimeters from my base. :D It's a little too unbalanced - it gives the feeling there's one and only one way to build a network of defenses that will work to the end. But it's frustrating enough that I don't feel like spending the hours it would take figure it out. I'm not a big fan of TD's that demand high-speed changing/upgrading/selling/rebuilding mid-play, at least not so early in the game.

Can't even get the game to load :(

Fittis, try turning off adblock or pop-up blockers for the first run. After that, you shouldn't have a problem.

Well I got this pink thing and I built it and it cost all my gold and then it did nothing when the aliens came on and my base got destroyed. So, can't say as I give this game high marks.

I managed to defeat the final wave on easy

Build three blue towers on the bottom left of the screen. Two side by side on the large peninsula, one on the small peninsula. Place them 2 squares back so that you can add another tower on the tip. Upgrade as they go orange. Eventually buy a fourth blue gun right next to your base at top right. Once the 400g towers are available you will want to get one of the orange gatling guns, I placed it on the tip of the eastern peninsula. You'll want to have the blue gun on the western (thin) peninsula upgraded to at least level 3 to slow down mobs. Add a second gatling gun, then the 1000g shock tower on the tip of the narrow peninsula. Upgrade as you can but have at least 300g ready for the boss wave 15.

For the boss wave: create 2 walls just below your base blue cannon, and one above it. When the bosses come swap a level 3 blue cannon to the top then as they pass your three primary guns swap them to the top as well.

final configuration (after swapping things to the northeast) https://jayisgames.com/images/hs_pam_marstowerdefense_final.jpg

In addition to troas

Sell any towers you can't afford to move up after the last boss has passed.

When an enemy reaches your base, you lose MONEY. Lose all your money and it is game over. It can be better to just let an enemy reach the base rather than use up your remaining money in a futile attempt at stopping it.

heh, I can't actually seem to beat this on easy but I managed to beat it on normal. I think its because I was able to make my own maze. pretty standard pattern really, same design I used for desktop TD.

the flying boss at the end is a kick

I beat nomaze on normal. This is how I did it.

I bought 3 grey cannons and let them level up on their own. When I save up enough, I buy blue towers at the top corner of the map and then switch them to my set up at the peninsula. I buy only enough blues to take care of the waves, and upgrade when they're orange.

Then I buy a flame thrower at the peninsula next to the blues. Add or upgrade blue towers as needed, no more than 5 is enough. Continue to save up till you hit the 600+s to buy the tesla coil by selling some of your levelled up blue and grey towers (youd be selling them at a profit at this point)

At this point in the game I had ; a few level 5 blue towers, a lvl 3 flame thrower and a tesla coil.

When you reach the 3 boss wave you may end up having this much to work with after numerous scrapping and lvling and probably around 300g.