After ERS Game Studios' hidden-object adventure series Maestro: Music from the Void and Maestro: Music of Death, you'd think your taste for musical prodigies might have soured a bit, what with all the unspeakable evil and demonic pacts they seem to attract and leave you to clean up. In Maestro: Dark Talent, a performance by "Diva", a singer who literally came out of nowhere, turns freaky when your friend, Kate, and the rest of the theater patrons are sucked inside by the dark forces du jour, where they'll have their life force drained unless you can stop them. At least, according to some dandy in an alleyway who calls himself a "Knowing One", which sounds smug and insufferable until you realize there's a good reason he's not called the "Actually Effective One", and soon it's up to you to stop Diva and the dark forces and wannabe Dementors behind her. 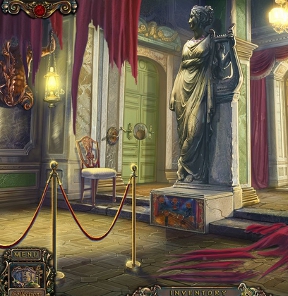 ERS titles always have high production values, and Dark Talent is no exception with its gorgeous illustrations, though several of the voice actors give performances that imply they're bored out of their skulls. There's actually an interesting story at works here, with an antagonist that actually feels sympathetic, but the staggering amounts of backtracking and busywork and precocious ferrets means the tale unfolds at a snail's pace. Fans will love the variety, however (even if the game doesn't actually know what a bridle is), as the piles of puzzle types and hidden-object scenes keep each area feeling fresh and different, not to mention vaporizing evil spirits with your MacGuffin feels appropriately epic. It's almost enough to make up for the fact that the game essentially forces you to be a glorified Care Bear to defeat Diva. Almost.

The game picks up after you're finally allowed out of the opera house, and exploring the streets is a lot more interesting... and insane, as your character's reaction to finding a small chariot blocking their way is to immediately decide they need dynamite. I mean... that's always my solution to minor obstacles, but the courts told me that was "wreckless, irresponsible, and borderline sociopathic". Regardless of difficulty settings, most players will probably speed through the game in around three hours or so, which is sort of surprising given how large the map is and how many puzzles and items there are on every square inch of it. As you'd expect from an ERS Game Studios title, Maestro: Dark Talent is both beautiful and polished from every angle, with the perfect balance of puzzles and hidden-object scenes to satisfy fans of both. I'm still a little skeptical about the ingredients you'll need to acquire to banish Diva later in the game, mainly because I can think of things that would generate a lot more positive energy... but I guess asking a pseudo-Victorian game to include a Farscape DVD, pineapple pizza, and novelty Spider-Man yoga pants is a little unreasonable.