In Gunnar Games' hidden-object adventure Lost Legends: The Weeping Woman, after a woman is abandoned by her unfaithful husband and her children taken away, she drowns herself out of sorrow in the river. Which would be freaky enough to know if you lived in the town alongside that river, but each year on the eve of Flores de los Muertos, a festival intended to appease the spirit, a child has gone missing. Which totally means you, as a plucky, cynical reporter, are definitely going to get the scoop of the century. Tragedy sells, amirite? Take that, Ben Urich, Clark Kent! But though you may not believe in the legend, the locals do, and it's clear something is going on since, you know, vanishing plot moppets and all. And then there's the fact that you see the daughter of the innkeeper get plucked off the swing by the Weeping Woman herself, but hey, I'm sure once you track her down and explain that she doesn't exist, you smug American you, she'll understand what a crazy mistake she's made. Search for clues, solve puzzles and hidden-object scenes, and explore the town while you talk to the locals in order to get to the bottom of things! 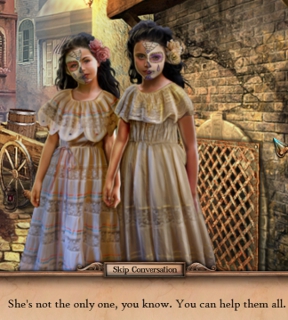 Gunnar Games' spin on the old legend is, um, rather romanticized compared to the original tale, something that has seen a lot of play in pop culture from shows like Supernatural and Grimm, even to Universal Studios' Halloween Horror Nights event. Still, Lost Legends: The Weeping Woman contains all the elements you need for a good creepy tale. The legend of scorned love and revenge. The perquisite creepy old lady with portents, mysterious sayings, and one blind eye. A ghost that beans you in the face with an oar. The visuals are a riot of colour and detail that makes every scene something you want to stop and admire, but it does sort of make me wonder how regionally accurate it all is, especially since most of what makes the game's festival seems to have been ripped from The Day of the Dead. Still, it does make for great atmosphere. As you explore the town, you're constantly being followed, unsure if what you see is your imagination. The plot moves slowly since it's broken up by a lot of backtracking and finding maracas (so many maracas), but has a few solid twists along the way. Despite the creepy subject matter, the game actually winds up being less scary and more straight-up mystery thriller, with the scariest thing probably being the Hot Topic eyeshadow mess the Weeping Woman is rocking. 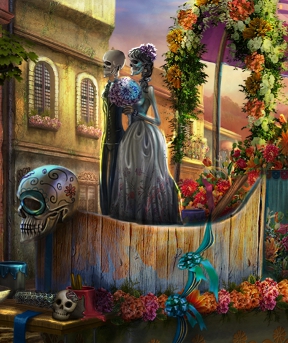 As mentioned, the gameplay has a lot of backtracking, and a lot of the obstacles are silly enough that you can tell they're just there to pad the game. (When you find yourself ripping apart an alligator's nest to make a strange old man tea, isn't that the time to start questioning your life choices?) Though some of the item uses can be a little... odd... none of it is still particularly difficult, just occasionally irritating. Gosh I sure wish I had something to shift this heavy rock... like the crowbar you made me toss away literally ten seconds ago. Still, some of the puzzles are pretty clever, and the huge map the game takes place across means there's a ton of variety to be had in it all. Like most casual games these days, Lost Legends: The Weeping Woman is streamlined through the use of customiseable difficulty levels and a helpful instant-travel map. While it's lacking a little creative oomph that keeps me from smacking you across the chops and demanding you play it thusly, and is probably easy enough that most players will finish the main game in about three hours or so at the outside, it's still a game I really enjoyed. Lost Legends: The Weeping Woman is well worth a visit with the demo if you're on the fence, and blends folklore with mystery for a solid adventure.