In Five-BN Games' hidden-object adventure Lost Lands: The Four Horsemen, after a boring shopping trip on your way home to make boring dinner for your boring kid, you suddenly find yourself whisked away from the parking garage to a strange world where you're told by a sexist hermit mage that, though he was praying for the "Chosen One" to come defeat the evil plaguing the land, you, despite being a "fragile female", are responsible for saving the world. Which seems like a lot to ask for someone wearing red pleather and shoulder pads, regardless of gender, but hey. What's this "great evil" you ask? Well, it might have something to do with the fiery destruction you glimpse being rained down on the very cottage you find yourself standing in front of, though that's a future that will only come to pass if you can't find a way to stop the flaming swordsman who caused it. With mermaids, halflings, portals through space and time, and much more, Lost Lands: The Four Horsemen is a satisfyingly epic and lavish fantasy adventure that's perfect for casual fans looking for a lot of magic. 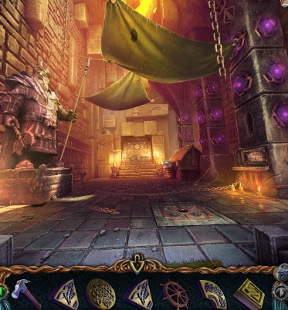 Lost Lands: The Four Horsemen makes the best of its otherworldly setting by infusing the gameplay with a lot of magic. While you can expect to encounter the usual puzzles and hidden-object scenes, the use of potions and spells to accomplish tasks helps add a magical flair to the mundane and keeps you excited for what you might see next. The downside is that there's an enormous amount of backtracking to be had, back and forth across the maps you'll open up, and a lot of the item-based puzzles you need to solve can feel like busywork... no, you can't just brush the hay aside, you need a special item to move it, and even though you could solve this puzzle with extremely fast and simple deductive reasoning you need to find a special clue item before you can try. It makes The Four Horsemen feel clunky where it shouldn't, especially since it's otherwise such a gorgeous, engaging game. There's a lot of optional lore for you to find and read, which is unusual for a casual game to bother with, and the cutscenes are beautifully animated with professional polish and an eye for elaborate, fantastical design. It really feels at times like you're watching a movie unfold.

Though the title sort of gives everything away, the game goes a long time before it expands on what the "Evil" is you're supposed to be preventing, presumably because the mage doesn't think your fragile female mind could take it. (Ugh. Did we really need that line? Couldn't it be phrased differently?) Still, it's hard not to get sucked in because of how beautifully put together it all is, with an incredible amount of detail in every scene, throughout every area. You'll travel to several different locations, each with their own map, and throughout it all the games keeps its balance of classic point-and-click adventuring and puzzles to hidden-object scenes rock solid... though here the latter are much closer to simply being contained puzzles themselves, as has been the trend in recent casual games, which might be a bit of a disappointment to fans of ye olde hidden-object listicles. With its rich setting and lavish visuals, Lost Lands: The Four Horsemen manages to be a cut above the rest, especially for fans of casual adventures with a more magical bent. Tack on morphing collectibles and a strange machine to assemble as you play, and you have a meaty, engaging game with a ton of polish that's easy to recommend.