Loom Custody is the latest escape game from uber-talented Japanese designer Place of Light. In it you wake to find yourself ensconced in a grimy, nearly-bare cell. The blue sky glimpsed through a high window grate is the sole spot of cheer in your bleak prison; with a bit of exploration, however, you will find that the room is far more intriguing and complex than it first appears. To have any chance of escape, you must discover clues, solve puzzles and use all of the limited resources at your disposal. A classic scenario, but one that Place of Light does very well. 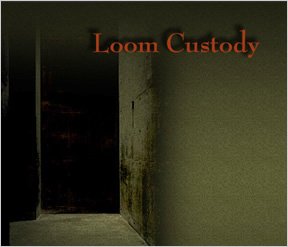 Analysis: While I enjoyed playing Loom Custody, I was ultimately left feeling underwhelmed. While still very good, it does not entirely live up to the standards set by the rest of the developer's body of work.

However, Loom Custody is in no way mediocre. It contains all of the important elements of a high-quality escape game: the puzzles are thought-provoking yet refreshingly logical, the interface clean and professional, the graphics nicely evocative of your predicament. There are even a few fun surprises! It's just that after the releases of so many superlative games by Place of Light, Loom Custody does not quite live up to my expectations of what the developer is capable of. The game is simply too short and relatively easy to stand up next to the likes of the extraordinary Room Marine (my personal Place of Light favorite, and one of the best room escapes I've ever played). I also felt that while its puzzles are interesting, Loom Custody lacks the element of innovation that is present in the designer's other creations; there is nothing in the game that I haven't seen before in some shape or form. On the other hand, Place of Light produces games considerably more quickly than many other top-notch escape game developers. Maybe it's just an issue of quantity winning out over quality.

Even if Loom Custody is not Place of Light's magnum opus, it is arguably one of the better room escapes out there. While I hope that the developer's next release will be a return to longer, more difficult games, I can't deny this one is pretty darn good; well-crafted, good-looking and entertaining, it's more than worth your time. Have fun!

Special thanks to Grinnyp for writing up this walkthrough! \o/

Special thanks to Grinnyp for writing up this walkthrough! \o/

Did it on my own in about 20 minutes. Place of Light games usually take me longer. I really enjoyed it. Nothing far fetched or abstract about it at all. Bravo for this game.

Yeah... I was just saw the list of the other five escape games from these folks and remember playing each one. Some of those took me a LOT longer. This is definitely the easiest. Perhaps too easy. Maybe next time I should read the review before posting. LOL!

Still a good game, though.

Yeah, this was definitely a lot easier than the previous games in the Loom-Room series, but still quite enjoyable. It was definitely nice to be able to escape a room without having to peak at a walkthrough...been a while on that. X_x;

I'd think this could be a good one to introduce friends to the genre.

A nice easy one. The only tricky for me was the idea behind the symbols for the long code.

Nice game! I must be dumb because I needed the walkthrough to figure out how to get the last code.

Anyone know about the thing after the end?

After I finished, I rolled the mouse over the kanji in the lower right corner and the portion of the text in English read "You might find kind of 'thank' in the room". Then at the bottom was a place to click to "Go back to the room."

Going back, I can't find anything different, except the pink flower that was there before I escaped. Anyone figured this out?

The flower was the thank you from the bird.

The strangest thing about this game: The floor texture used in it is almost exactly like the floor in my grandparents' old house. o.o

Almost made it without the walkthrough. Ironically, I only really got stuck after finding freedom... A very enjoyable game nonetheless, even if the prison style felt a bit unnecessary.

Heh, it took me about 10 minutes to figure out I needed to

use the light to light the match

. Then I laughed pretty hard at the pun.

Okay, how do you

light the candle with the match? The walkthrough says to hold the match up to the fixture, but that doesn't work. I can't "hold" the match.

I misread the walkthrough. I was interpreting the light fixture as the candle by the door. I should have refreshed my page to see JIGuest's post before I posted mine.

It wasn't that super easy. I somehow got nervous in some points instead of having fun... anyway in the end was nice, and the bird super cute.

I actually found the "thank you" item before leaving the room for the first time. So nothing new to be found when I came back.

I have tried to enter the last code many times

but nothing happens. Am I missing something??

No, that's the code. When all the numbers are entered correctly the dial changes to "freedom" and the exit appears.

"Thanks for taking that match off of my tail."

Ah, never mind, I was missing an event trigger; I hadn't

blown up the door

which is also why I needed the walkthrough to figure out the final code. :P

And a tiny bug (that doesn't affect gameplay):

After you blow the door up, it still appears to be intact when you look at the candle in closeup.

Am I the only one who couldn't break the light fixture with the hammer?

Use the towel to unscrew it from the ceiling then try to break it while it was on the ground? Because you can't smash it while it's still on the ceiling.

Aha, I found it. This game really, really looks like Bianco-Bianco's Rougoku. Yeah, there are a million sparse cells out there, but there was the

grating with the water, and overhead item, and the bench.

I left bread on the windowsill, but the bird doesn't come...is this a bug, or have I missed a step?

Did you leave the bread and walk away? Back up, turn around, examine a couple of things, then go back to the window.

That one puzzle was waaaaaay counterintuitive for me. I would never have thought of

using a wet towel to grab a live light bulb.

Don't try this at home, folks!