This title is available in Pay What You Want format, including free. If you enjoy this game, please consider paying the developer what you think it's worth!

Ever had a night out with friends in nature, enjoying the sounds of the fire, staring into the night sky and willing to talk about anything since you're so bored and the last bits of good gossip was shared an hour ago? Longest Night is exactly that as a group of friends turn towards the constellations to help pass the time with one another. While recounting the history from long ago of the very odd world they live in, we may even learn a few things about their own past. Finji's indie experimental game is more of a mix of super short stories with some semi-surrealism mixed in than a real game. Connect the stars on the patterns by using your mouse to click and drag a line between them, and then get a brief conversation with the characters below. Occasionally the character Mae will have a choice between responses as shown by arrows on their dialog, and then selected by clicking on the words you want her to speak. As a small glimpse into their full game, Night in the Woods, coming later in 2016, The Longest Night isn't there to have you achieve anything except for maybe some creativity shared and nostalgia of times past with close friends. 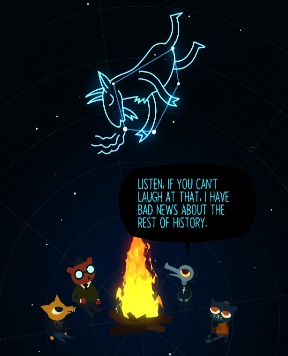 Longest Night isn't about scores or solving puzzles, but more about seeing something different and trying something new. All the star patterns are more or less laid out for you. Each constellation has its own soft sounds, so it's impossible to mix up even if you ignore the picture in the background. If you try to connect two dots and they don't work, then they don't go together and you have to try a different way, but none of the constellations should take you long to piece together. That's because the game isn't about that at all. It's about the group of friends down below sharing the knowledge they have. It's a supplemental game for the full one coming out but it's not a demo either. This very intriguing game is just to be appreciated for all its weirdness and perhaps help you expand your own creativity, as well as to see the friendship these sarcastic creatures have. Even if Finji's real game doesn't interest you there is something so strangely tantalizing about Longest Night you won't be able but to just enjoy the stories laid out before you. If you like this game, be sure to check out Lost Constellation!

Windows:
Get the full version (Pay What You Want, including free)

Mac:
Get the full version (Pay What You Want, including free)

Linux:
Get the full version (Pay What You Want, including free)

Definitely gonna look out for more of Finji's work!