Alec Holowka, Scott Benson, and Bethany Hockenberry deliver a moody, lovely, and even frequently funny indie spin on folklore in Lost Constellation, a chilly ghost story based on a folk tale from their upcoming title, Night in the Woods. Framed as a bedtime story for a particularly spunky kitten, you find yourself in the snowy woods on a mission to keep a promise. It's strange and surreal and maybe even a little unsettling... everyone you meet seems convinced you're going to die, but you're determined to make it through no matter what you might see or hear. You're looking for the forest god, after all, and the frozen lake, and on this, the Longest Night, anything is possible. Use [WASD] or the [arrow] keys to move, [spacebar] to jump, and click on people and objects to interact. When dialogue balloons have little blue arrows on either side of their text, you can click those to cycle through different things to say. Keep your eyes peeled for objects in the trees... you can click and hold on the snow you're walking on to collect snowballs, then aim and fire with the mouse to throw them at things. Note that while Lost Constellation is available as "pay your own price", including free, if you enjoy it, please remember to support your indie developers! 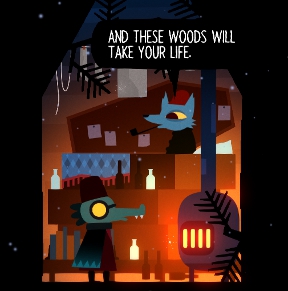 Lost Constellation is one of those rare games that manages to balance humour with seriousness in all the best ways, dry and sarcastic or simply silly one moment, sublimely creepy or lonely the next. It doesn't sit you down and explain what's happening, where you are, or even who you are, it just drops you in and lets you explore, letting the environments and characters gradually flesh out the world. Lost Constellation is definitely all about the journey rather than the explanation, and you'll get the most out of it if you focus on just taking things in. It fairly crackles with mysticism, thanks in no small part to its beautiful visual style and elegant soundtrack. As far as its gameplay goes, Lost Constellation is mostly fairly straightforward, and as long as you talk to everyone, you likely won't have any trouble, especially since the game will often give increasingly specific hints as to what you should be doing. Navigation may initially seem hard when you keep coming across places and people you've seen before, but rather than trying to backtrack somewhere specific, if you keep moving forward you'll eventually come across everything all over again. Though billed as a ghost story and definitely possessing some unnerving qualities, Lost Constellation isn't exactly a horror game, and shouldn't be avoided by anyone who dislikes those... it's a brilliant example of world building and lore, of humour and weakness and love, all wrapped up in one stunner of a package. Lost Constellation is beautiful and unmissable, and I can't wait to visit its world again.

Windows:
Get the full version (Name your own price.)

Mac OS X:
Get the full version (Name your own price.)

Linux:
Get the full version (Name your own price.)

Is the area on the other side of the

meant to be upside down and make your cursor disappear?

I was playing this and enjoying it very much, almost at the end of the game, I think, when my screen went completely black, though the soundtrack kept playing. I've tried to shut off the game using task manager, putting the computer to sleep, restarting in safe mode, everything I can think of, and I can't get out of this dead black screen. At least the music has finally stopped, but I'm at my wit's end trying to just leave the game. Can anyone help?? I don't see any help links on the download website.

Well, happily, my computer has revived, but do watch out for crashes on finishing the game!

Oh no! That sounds awful. Try contacting the developers through the official site here: http://www.nightinthewoods.com/

I'm honestly not sure what the problem could be. Are you saying that you have restarted your computer but your monitor is still black because the game is still on? And you can't shut down the game even though you restart?

Well, I finally finished the game. It turns out my crashing problem was an issue with my very old monitor, not the game itself, just the timing of it all was a bad coincidence that made me think the game caused it. The game itself was lovely, and now I can't wait for Night in the Woods!