Get up, get up you sleepy head, it's time, it's time to get out of bed! Why? Well, not because of any stupid responsibilities if that's what you're thinking! The weekend is almost upon us, and today also marks a very big milestone for one success story! We take a look at some upcoming indie titles, including a pair of fan-made games from two very different sources that have the potential to make a lot of gamers very, very happy. 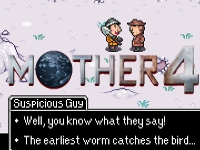 Preview Alert! Earthbound is a series of remarkably quirky but also surprisingly deep JRPGs that gained most of its audience in North America with the release of the sequel in 1995 for SNES. The series' rabid fanbase has spawned a whole lot of unofficial spinoffs, including a patch that translates the third installment to English, but few offerings are regarded with as much apprehension and hope as this upcoming unofficial installment. Making the jump from several popular game making software programs to its current development in C++, the title has been in development since 2008. It'll follow a boy named Travis who gets wrapped up in global danger when people everywhere start getting abducted by masked men and hostility breaks out everywhere. You can check out the official synopsis over at the site, as well as a batch of screenshots and a handy FAQ that may answer some of the questions you probably have. No word yet on release date, but news keeps coming down the pipe, so keep your eyes peeled! Boing! 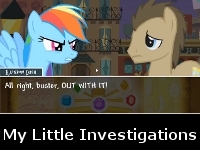 Preview Alert! If you loved the Ace Attorney games and have a soft-spot for ponies in your heart, then you might want to keep an eye squarely planted on this upcoming adventure game from Gabu, featuring everyone's favourite rebooted cartoon horsies and follows bookish unicorn Twilight Sparkle as she solves various cases around Ponyville, Phoenix-Wright style. You'll get to explore the town, track down clues, talk to all your favourite ponies, and even partner up with some of them to get help in your investigations! There's no official site currently, but there is a very extensive and updated developer blog stuffed full of everything from multiple video demos to the nitty-gritty technical stuff. (It should be noted the music and the pixel graphics are just placeholders.) What's already been revealed looks great and remarkably well done, so if you want to find out more and offer support or cupcakes, head on over! 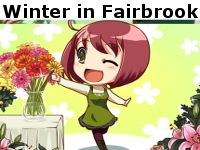 Preview Alert! Remember 2010's visual novel simulation The Flower Shop? Well, if you are of a lady-type persuasion, or just a fan of visual novels in general, you'll be happy to hear that a spin-off featuring a female protagonist called Winter in Fairbrook is drawing very near on the horizon! It follows a girl named Natalie who winds up working at a flower shop in the town of Fairbrook on her winter break, and maybe experiences a little personal growth and romance as a result. The game will be released by the fine folks over at Winter Wolves, so keep your eyes peeled! In the meantime, you can check out the updates from Sake Visual over at their blog including a lot more details, screenshots, and gameplay videos! Who's excited? I'm excited!

Released! After years in development and a growing fanbase that has made it one of the biggest successes in indie gaming history, Minecraft 1.0 will be available today! The sandbox game that became a phenomenon even has its own convention happening right now in Las Vegas, but even if you can't be there to celebrate, fans everywhere are doing their happy dances at the computer. This does mean, of course, that if you haven't already picked it up, you'll have to pay full price now that the game is available in full, but don't let that deter you. Team Mojang has stated that they intend to keep creating and releasing content for the game as long as there's interest. With an enormous community and tons of resources online, it looks like Minecraft's future is bright! Congratulations, Mojang! You did it! (And we can't wait to see Scrolls!)

Not loving the new Link Dump Friday format. I used to anticipate a few quick and very casual games suited to the end of the week. Now it's just a rehash of stuff you've already posted.

As we have mentioned before, all the end of week games we would normally put in Link Dump Friday have been given their own review/comment pages. They will appear throughout the day on Friday.

Nothing has been taken away from you, just something new added.

And not everything in the new LDF is a rehash, we never had any place to put news, previews and updates before. And besides, not everyone who visits us visits every day. An end-of week recap is a fairly common practice, and it gives us a place to highlight games we feel deserve a second look if you passed over it the first time.

Having them 'appear throughout the day on Friday' does take something away from me: the entertainment I would have normally received now. :P

If there's one thing I've learned by running this site over the years: you can't please everyone no matter what you do, no matter how hard you try.

According to the old adage, you *can* please all of the people... *some* of the time. Just, apparently, not on Fridays. ;)

Just don't get rid of Weekday Escape and I will be happy some of the time. ;)

I'm not into My Little Pony: Friendship is Magic, and in fact I'm sort of avoiding it because of its ridiculously memetic status, but I'm very into the Ace Attorney series... which leaves me fairly torn regarding My Little Investigations.

I am personally very excited to be able to update my Minecraft server later!

Mother 4!!! Been watching this project for a while. Not much has happened with it lately, which frightens me, but just having it out there in the ether is awesome. Hopefully it won't go the way of 99% of fan projects.

The comments section of LDF has always been a fun read and, looking at the last few posts above mine, clearly that much will never change. ;-)

I actually missed this one for some reason...went back to see Previews and saw My Little Investigations. Awesome! Hope we get MLP games/previews every Friday, that'll definitely make it worth it *shot*