You may ponder the meaning of the name Amajeto, since it's a word unfound in the dictionary or Google translate. Yet if you had doubts that Lily Temple might be some rowdy bar filled with pugilistic sailors or a dank woods haunted by some uncommonly thin murderer, they're soon assuaged as you enter this lovely, serene scene, the setting for Amajeto's second escape-the-room creation. You are indeed inside a small clay-walled temple where the focus is centered on collecting and arranging seven lilies in order to earn your enlightenment, or, er, freedom. 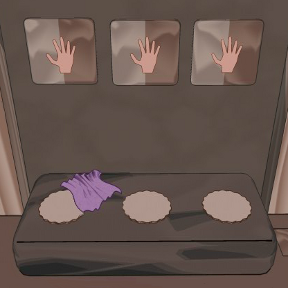 The navigation and gameplay are the standard escape game methods—point-and-click to move about the room and seek out interactive areas. Inventory can be examined in detail by clicking the lower right corner of the item's box; highlight items to use on stage or to combine with another item that's opened in the detail screen. A changing cursor helps this process although it doesn't replace a precise and studied exploration of every area and object in the room.

Despite a rather TomaTea flavor that hints at more than mere imitation, the lack of "I have no clue" messages and the jazzy smooth instrumentals as well as a certain ineffable style marks a departure between the works of the two monikers. Some familiar puzzles make their reappearance here as well, such as color patterns and clicky corners. For the most part, these puzzles pose little challenge with clues that present obvious solutions once you connect them to their corresponding device. A few hiccups might slow you down, though (a slight spoiler ahead): in one corner of the room is an obscured active area because there's little indication you should click there unless you scrutinize the scene with the changing cursor; in another area is a puzzle that has no sound or visual effects so may look inoperable until you work out how to play it. These are small matters in light of the contentment that comes from a beautifully-designed and perfectly relaxing escape game, which seems to be an apt definition for Amajeto as well as the pretty Lily Temple.

The position of the red dot on the wall panel gives the order, reading left to right, from top to bottom...

Spear Throwing Statue and a Lily

The arrows on the beam, next to the three hands, give the order. Read from top to bottom; if an arrow points right, click the right eye, etc..

The answer is on the door deity's head...
YELLOW
RED
BLUE

The answer is on the front of the water basin.
Screenshot: 5 Symbol Tiles Solution

The answer is also on the front of the basin: the picture of the lily...

Ooh cool. I dunno why, but I liked this one. Love the playfulness with the shapes. The thing is, they go far, yet not far enough; other devs might have used the change of view to drop a new clue.

Now wondering if that big ole red herring is in fact a red herring. I was so prepared for an epic puzzle.

You know, it would be a lot easier to escape these rooms if...

Stuck. I can't figure out where/how to use the

Anyone available with a hint for that?

@rhed: I was stuck there for a while, too.

Look on top of something.

@rhed: Yeah, I had a lot of trouble with that too.

You know that stack of three circular things? You can look at the top of it.

The position of the red dot on the wall panel gives the order, reading left to right, from top to bottom...

Spear Throwing Statue and a Lily

The arrows on the beam, next to the three hands, give the order. Read from top to bottom; if an arrow points right, click the right eye, etc..

The answer is on the door deity's head...
YELLOW
RED
BLUE

The answer is on the front of the water basin.
Screenshot: 5 Symbol Tiles Solution

The answer is also on the front of the basin: the picture of the lily...

I really like this one.
All the puzzles were logical - unlike many others.

I've been doing pretty well on my own so far, but now I'm stuck.

I need one more flower.

I'm having trouble with the hand color puzzle.

I'm betting that solving the second problem will take care of the first.
:-P

I realized what two of the colors should be and brute-forced the third. And my wager was correct. :-P

Going through it again,

I recognize the third shape and see why it's the color it is.

I got through most of it on my own.

The two places I got stuck were:

I have to ask, am I the only one who cannot get the game to load? The ad loads fine, but then I get a white screen and if I right click it says Movie not loaded. I'm using Opera 12, if that helps any.