Isn't it always the way? You get into witchcraft for the love of communing with nature, dancing skyclad through the heather and magically-fresh laundry, and before you know it you're inevitably found out by the townsfolk, reanimating their ancestors to attack everyone, and your sister's assembling a strongly unfragrantly-scented abomination to avenge your execution and drive everyone from the village. It could happen to anyone and in Last Town, the time management defense game from Elliot Pace, your role is the heroic town Mayor determined to keep your community together and preferably alive during the onslaught of a Plants vs Zombies mishap brought on by, you guessed it, Too Much Magic. With plenty of upgrades, eight addable character classes to rock each with their own set of skills and upgradable abilities and a comprehensive storyline where your choices really do significantly affect the gameplay, Last Town brings a lot of what we learned to love from Plants vs. Zombies while remaining something all its own. 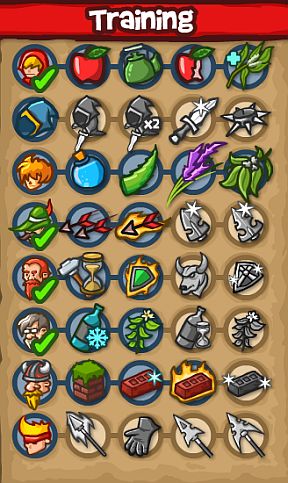 Each night a merchant arrives to sell you upgrades for any Gems and Coins you've gathered from your ancestors. You then have the chance to dig up a few more, and can then click to place your initial units. Each unit has their own special abilities, such as Farmers who can plant apple trees enabling you to afford more units. Take notice, in some levels you'll need to keep Farmers on the board if you're going to be able to keep shoring up your numbers! Felling foes will often net you rewards like Gems, Coins and Stars. A unit's skills will charge whenever that unit type attacks the baddies, resulting in Stars that afford uses of their special abilities at the left by clicking on them. For some of them, you'll need to then pick a target location on the field with another click. The levels start off fairly easy, but watch out for a difficulty curve that spikes near the mid-game and becomes suddenly unmanageable for the last level. Though some of the 22 levels can get a bit grindy and take plenty of retries to get right, the playability's enough to make that experience enjoyable. Mostly! A Fast Forward feature would be nice for some of it, but it's useful to know that you can usually return to the menu with the Gems and Coins you've garnered so far and try again with some improved capabilities. Last Town makes for a great way to get your Plants v. Zombies nostalgia fix while enjoying plenty of game dynamics that keep it unique and refreshing.

The only bad thing about this game are the glaring spelling errors. Superstitious has a C? If you're gonna do a narrative game, get someone to beta-read; poor language takes away from the gameplay.

Also taking away from the game is, once again (cough Phoenotopia) is too much fancy Dragonball animation slowing down the special skills. You need them in desperate moments, and then it takes far longer than a moment before the whole power move even completes.

In terms of the narrative, it was an impressive mesh between story and gameplay, but don't expect an earthshaking pay-off. Fun and has replay value.

Could someone explain what the Eucalyptus Essence upgrade does? It appears to be the only town upgrade without a description.

I wonder that if

I kick the merchant out of the city and stop the trade, will the final boss head become merchant instead of the adviser...

And to easily win the game, just upgrade fortune to max level and just lose one battle repeatedly to collect enough gems and coins, then you can fully upgrade those useful skills and useful guys and spam the zombies.

And I still don't know what is adrenaline for.

WHAT THE FRACKING HECK!!!!!! Last Night I beat the game an became "abe10 the frugal and civil barterer" and NOW My High Score Calls Me "abe10 the leery and unforgiving magistrate." WHAT HAPPENED???

Healing heals for much more.