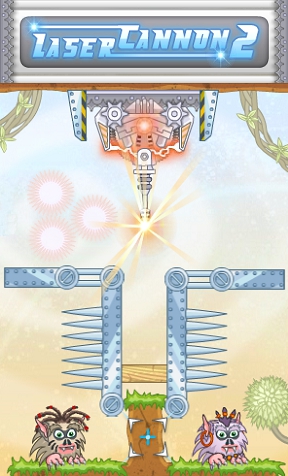 While jetpacks are the futuristic invention people traditionally desire, my choice has always been a laser cannon... for entirely peaceful purposes, of course. I mean, they just have so many uses around the house: hedge-trimming, apple-coring, and causing the cartoonish demise of annoying critters. It is the latter that Laser Cannon 2, the new physics puzzler from Max Derevyagin and team (formerly of Sigma Studios), focuses on. A shade sadistic in concept? Perhaps, but if the creatures didn't want to be laser-blasted, then they shouldn't look so much like Furbies.

Played best with a combination of mouse and keyboard inputs, in each level of Laser Cannon 2 you must shoot, squash, fry, or destroy each of the monsters using the titular cannon. Move the cannon into position with [WASD] or the [arrow] keys, then aim with the mouse then click launch a blast. The laser blasts can do quite a few things: they can fry critters directly, slice through chains, explode barrels, knock out force-field power-plants, bounce off of metallic surfaces, or splinter the support beams of an unstable structure. Should your cannon have enough juice, you can hold the mouse button down for two seconds for a charged shot that's great for destroying walls. Firing upon an energy icon will refill your power gauge. There are 30 levels to play, but you'll have to pick and choose your shots to get a three star ranking on all of them.

Laser Cannon 2 is simple, satisfying and fun. None of the levels will be too taxing on the old noggin', but the game's sense of humor sets it apart from the more technical entries in the physics genre. While it did seem each level was designed with only a single "right" solution in mind (causing the strange situation that firing fewer shots than what the developer expected ultimately penalized your score), said solutions are designed well and it was wonderful to see each plan come together. There are a few concerns: the music quickly became repetitive, I would have preferred it that the qualifications for each star ranking were explicitly stated, and the whole thing was over way too quickly. Still, the pros outweigh the cons for a charged-up little time-waster.

Nice one. I guess some of the levels would have been much more trying (and maybe even annoying) if you're trying to get the best score, but for a casual half-an-hour just-beat-the-levels game it's just cool.

Pros:Moving the laser.
Power shots to get past annoying breaking wood.

That was fun. The levels were pretty easy (and I'm not particularly good at this type of game) but the polish - graphics, animation, and controls - were really nice.

like bioLarzen said, a nice way to kill a few minutes.

I just played the first installment. This part #2 is a definite step forward IMHO. The moving cannon is a great addition, as is the turbo shot.

The levels are also better designed.

Getting a three star ranking on each level isn't enough to get the top score. To do this you need to get a score of 350 per level which generally means using one less shot than is needed to get three stars.

Is it me, or do all the "enemies" in this game resemble stereotypes of Indians, Africans, etc.?

Combined with the shiny high tech cannon, it seems uncomfortably like a symbolic reenactment of the conquest and genocide of indigenous people.

Sigh. Racism isn't always a conscious choice, you know. Sometimes, people do it without realizing.

Joey, it's obviously just you. People who see racism in something as ridiculous as blowing up Furby-looking creatures obviously have underlying issues with race of their own that they need to deal with.

On the lighter side, I liked the game. Kind of short, but not bad. I guess I didn't do too well, seeing as I only got one "congratulation" at the end, rather than "congratulations"

Hi, I'm an author of this game. I'm from Russia, and I don't see Indians and Africans here:) If you see the genocide in the game - it's your idea. I have no racial hatred.

I dunno, the dreadlocks, big hoop earrings, feather headdresses and mohawks don't seem like stereotypical adornments to you guys? I can see where Joey is coming from, though I find it hard to get too upset about this game when there's more brazenly racist stuff like Pocket God out there.

I see wondered, why are we slaughtering these creatures? It's okay if it was like Fragger which was taking out terrorists (though they seem idle and friendly).

Interesting. I would suggest that those various adornments are more considered stereotypical of the dominant perspectives of wildness/savages. Certainly the fact that specific races have, in the past, been depicted as savage makes the use of said adornments on non-human creatures not altogether untroubling. However, aren't these entirely appropriate for creatures that are, in fact wild animals? I guess the real question is how do you make a non-human creature look wild/savage without resorting to human stereotypes? Or is that even a fair standard? Open question.