Last time in this whimsically surreal and remarkably beautiful point-and-click adventure series, our stalwart hero Triton found the legendary magic of the ancients and passed through a space-time hole. But this has deformed the neighboring universe, disrupting phases of the moon and other important bits. Now, in Jacek Szleszyński's Kveendolnitza 2, will Triton be able to use the kveendolnitza to restore the old order? Eh. Who knows? Why don't you give the little fellow a hand: explore the world around you, search strange surroundings to uncover useful objects and use them in the correct order, solving riddles and other puzzles, and you'll find the answer at the end. 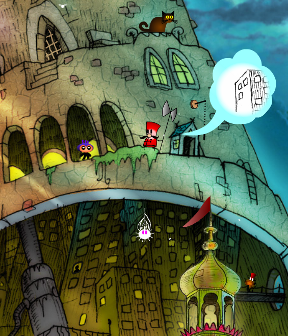 Played mainly by hovering your cursor around the intricately detailed landscape, looking for when it changes to a pointing finger (for selecting items) or footprints (for moving). The caveat is, you can only use certain items or move some places after completing the proper tasks. This trial-and-error creates a leisurely progress as you're toying with and testing reactions or, for the life of Triton, looking for an active spot and trying to make it work. You don't have pockets, so items you pick up will float glowing on the same setting as where you need to use them. Gameplay is very similar to Haluz, Samorost, and Hapland but you'll find more mini-game-style tasks here, some requiring dexterity, careful listening or sharp eyes. In fact, much of your success, both in the main game and the optional quest for jjgsaw pieces, will depend on your ability to spot shapes at just the time they're usable.

This sequel earns its 2.0 markings with snazzier graphics and harder puzzles, but certain flaws are more apparent, too. Rules of protocol tend to seem arbitrary, so it feels like there's more pixel hunts. Additionally, there are a couple aspects to the gameplay that feel unfair and this can be alienating to otherwise endeared fans. Those flaws won't entirely spoil enjoyment, though, if much of your enjoyment comes from exploring the amusingly gorgeous artwork, which is so well-rendered you can zoom your browser to full scale and it still looks good. All I can say is I want it framed on my wall or perhaps on a t-shirt so that everyone will stop me on the street and say, "I love your shirt!" That's how it feels to play Kveendolnitza 2 and dig into the artwork. Not a fan of this kind of art or of seeking out tiny objects in an elaborately detailed scene? Take a peek at least; see if you can change your opinion after playing a bit. If those two parts don't put you off, Kveendolnitza 2 is not to be missed. It's a lovely addition to the series and it will make you look forward to the next.

EDIT: the game has been revised, including significant changes to some puzzles. The above review refers to an earlier version of the game.

Get the Entrance Gate Open

Sneak Past the Green Monster

Feed the Monster in the Sausage Building

Getting Past the Upside-Down Buildings

Find and use the Key

Up the Ladder and Solving the Blue Bird's Puzzle

Get Past the Guard

Solve the Wheel Puzzle and Escape!

Walkthrough by Trinn—all thanks go her way!

Getting absolutely nowhere ... but diggin the music lol

I've made it to

The snake in the leaf. I assume U need to feed it something, to get the key.

If you've gotten as far as the big blue bird

the 6 birds in the 6 windows above give the clue for dot and dash - chirp is a dot. It's different every time.

I've made it to the record player.

I can't get past the spider and balloons...

Spider and balloons total spoiler. I'm not good at clues.

Click the antenna that the web is tied to

and no clue where to put them to help me progress.

Anyone get past the record player yet?
Only thing I've noticed:

Each time you play a record, it changes the music he plays when you click on him

Got as far as where the Fish wants you to play music and when you do it eats you and you are back with Salvador Dali.

Can't seem to do anything in the Dali room.

Tried all the records, tried playing different music outside

doesn't seem to get me anything different.

you can click on the pancake when he flips it, and then you eat it and

that's how you get out of the Dali room.

I'm thinking that the records have something to do with

the clock... I'm trying changing my music and going back to play music to the big clock.

It's slow going though, and I don't really have a clue what would be the right music.

I've tried all of them - in several places. I've got NO clue. I haven't got to the fish wanting music either. Just to Dali and record player and back as far as the clock.

Nice little game, but I didn't get all the puzzle pieces but you don't need them to get out as they are just a bonus.

Once the fish eats you, go out the window and then click on the small door, which takes you into the record room. Click on a record, play the music and go out, which will take you back to the whale. Play the music for it and once you have the correct music, you will be eaten and transferred to another room.

Loved the game. Got out but missing 1 jigsaw piece....grrrr.... start again!

anyone figure out the 12:00=puzzle piece clue?

fish? whale? I got to the Dali room and the record area from the place with the spider and the bubbles... I don't think I was ever eaten by a fish!

Get the Entrance Gate Open

Sneak Past the Green Monster

Feed the Monster in the Sausage Building

Getting Past the Upside-Down Buildings

Find and use the Key

Up the Ladder and Solving the Blue Bird's Puzzle

Get Past the Guard

Solve the Wheel Puzzle and Escape!

Walkthrough by Trinn—all thanks go her way!

The images in the walkthrough don't seem to be working...

Sorry, I forgot about that... We just need to load the images into our server, which I'm looking into right now! Thanks for your patience while we get them all in their proper places! :)

The JPEG's for the puzzle pieces are not loading and cannot be found.

Can't wait for the third one!

I don't know about you guys, but I hate

yep. worm and key puzzle made me close the window.

Yeah... there were a couple things that came up, one, the worm/key puzzle worked once for me, but then I restarted at an earlier point, attempting to get the midnight puzzle piece, and managed to fail at getting the clock to go to midnight and the key puzzle became frozen- the key absolutely refusing to move.

:-( I was really excited to play this game, too.

in repeat play I've seen more than one version of the worm-and-key. If you get the really early one, perhaps possible to save/quit/reload saved game?

Meanwhile, I'm stalled in the astronomy tower. Can't do as the walkthrough says -- if I click the mentioned object it goes somewhere else entirely and seems to leave me with no viable actions at all.

Oh those rascally pixels, how they hide. (ie, power of posting.)

Will you be more specific about what you're seeing/doing in that room? I'll try to help.