Kung Fu FIGHT! is a non-stop jump and run arcade game from Nostatic Software, creator of Quiet, Please! It's a game where you fight the bad guys to save the girl, just like in the cheesy old movies and video games from yesteryear! Sporting a variety of obstacles and a number of ways to deal with them, you'll fight your way across dojo and village on your quest, and since Nostatic loves us so very much, there are plenty of unlockable trophies as well as checkpoints to record your progress. Hooray! 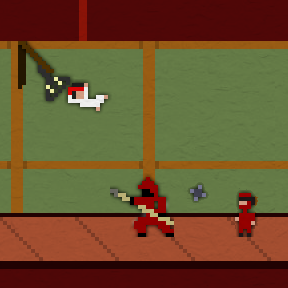 Kung Fu FIGHT! gives you three moves to deal with the barrage of obstacles that come your way: jumps, slides, and kicks. Use the on-screen buttons to unleash each move, timing it right so you'll avoid those inconvenient wagons of hay or the not-so-friendly shuriken flying towards your face. You can even combine moves to perform jump kicks and slide kicks, necessary to deal with some of the more creative baddies that will get in your way. Just remember: not everything can be smashed (even though you really want it to), so don't head out with feet blazing and expect to win!

Checkpoints temporarily save your progress, allowing you to restart without losing too much ground. Three levels of difficulty guarantee you'll have a challenge on your hands, even if you start with the lowest setting. There's even an endless mode and unlockable trophies to shoot for, adding plenty of replay value for this lovely little pick up and play arcade game. There's a little bit of a learning curve as you figure out which move to use against which obstacle, but once you get the hang of it, Kung Fu FIGHT! delivers a lot of variety in a very stylish sort of way!