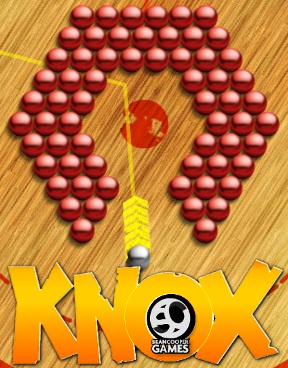 Many will see Knox, a new online simulation of the classic game of marbles by Boxhead: The Zombie Wars creator Sean Cooper, as bit of a throwback to an earlier age. As of late, marble games seem to have fallen into relative obscurity, at least in the United States. Nowadays you're more likely to see the glass spheres used to trip up a pursuing bad guy or being consumed by hungry hippos than played with in the traditional circle upon the ground. Whether or not it turns out to be a herald for a new resurgence of casual popularity, Knox makes for a fun little trip back to the schoolyard.

The rules of Knox are largely unchanged from the real life version of marbles: by aiming and shooting a white marble, knock all of the red marbles out of the circle. The game ends when all the red marbles are gone. Whichever player "Knox" the most red marbles, while keeping their shooter marble within the circle, wins. You can play with up to four players on the same computer or play for solo high scores in a number of practice modes.

To shoot, click on the marble and drag in the direction you wish to fire, the farther you drag, the more power behind your shot (and a little power can pack a wallop). You can also use the mouse to rotate the view of the board by dragging left and right, and zoom the camera in and out by dragging it forward and back. There are various options for the size of the playing circle and the initial number and configuration of red marbles therein, and online high score boards are available for each configuration. And there's not even a chance of losing your best catseye under the sofa!

While Knox is certainly well-presented, I have to admit that it rests in an incredibly niche genre. In our discussion, a fellow reviewer compared it to billiards sims, with their emphasis on angles and the occasional frustration of removing every last ball from play. I'd say that's an apt comparison, especially considering it's a kind of game people either love or hate. Though the variety of boards and practice modes are appreciated, the lack of AI competitors or online multiplayer can make the experience feel quite limited. But if you've been pulling your hair out trying to find a quality recreation of a classic past-time, Knox will ensure that you don't completely lose your... well... you know.

REALLY easy to get on high-score list- got first on three things first time I tried. I swear NOONE enters or even tries...

[Try updating your Flash Player and disabling your browser extensions, especially any ad blockers you may have installed (Free Flash games are ad supported). -Jay]

The scoring system for target games (well, archery at least) is if you touch a line you get the higher point on the line. Not the other way like in the game.