It's interstellar space travel, early 1800s-style! Kaptain Brawe: A Brawe New World is the first episode in a planned two part series point and click adventure games that keeps story and puzzles high on the list of priorities. Kaptain Brawe features a whimsical setting stocked with hilarious dialogue, quirky characters, and more gorgeous hand-drawn art than you can shake an ion-proton drive at. 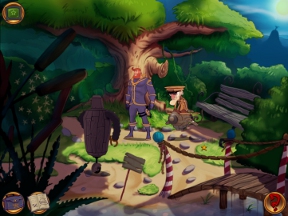 Kaptain Brawe is a space-loving police officer with a rugged red beard and a habit for spelling C words with the letter K. Also, he's a bit of a hero, in his own mind, and when a distress call comes from a nearby planet, he decides to check it out, forgoing back up in favor of doing it all by himself. With the help of his ensign. And a robot. And a bunch of other people he talks to. But other than that, completely alone!

Kaptain Brawe is a classically-styled adventure game that will remind you of the good old days of complex puzzles, cartoonish visuals, point and click interfaces, and a humorous script. So, the Monkey Island series, Broken Sword, and all those guys. Use the mouse to interact with objects, to walk the Kaptain around, and to speak with characters. Right clicking calls up your inventory, and you can use, inspect, or combine items from this handy little menu. The interface is smartly constructed and will be immediately intuitive for just about any player.

One of the game's neatest features is the ability to choose from Hard or Casual modes right from the beginning. The latter turns on a hint system that shows you clickable spots on the map, removing any sort of pixel hunting you would be in danger of participating in. Your journal can also reveal hints that gently nudge you in the right direction, if you need a little push. Allowing players to choose difficulty levels like this is a great way to open the doors for both seasoned adventures and the growing number of casual players out there! 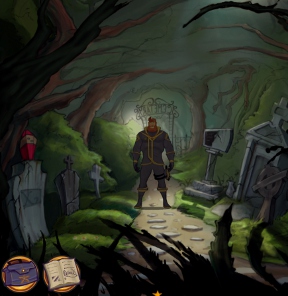 Analysis: Adventure games are usually judged by two main things: puzzles, and storyline. Kaptain Brawe hits the mark on both counts, providing a story that's funny, interesting, and multi-faceted without being stuffy or predictable. The characters are all clumsy in their own ways, especially our hero, and that's exactly what keeps you interested in the events that transpire.

The puzzle design is somewhere between classic adventure games and casual adventure games. You'll gather a fair number of items in your journey, not all of which you'll use right away, creating an immediate sense of mystery when you enter a new area. Should you try using that potato peeler on the flint stone you just found? This encourages experimentation, something that's necessary to solve the not-always-logical stumpers that occasionally come your way. The game does a good job of pushing you along when you're stuck, creating a fine balance between challenge and the satisfaction of solving the game on your own.

If the game looks a little familiar to you, Kaptain Brawe originally made an appearance in demo form back in 2006, when production was still going on and publishers were being courted. Cateia Games eventually stepped forward and nabbed the game, bringing us the Kaptain Brawe we see today.

Kaptain Brawe: A Brawe New World reaches a hand out to casual and established adventure gamers alike, inviting everyone to come in, sit down, have a cup of tea, and enjoy a well-written game that's a treat to look at and an utter joy to play.

When you have finished these tasks, talk to Kralek to head to Jama Spacea.

Touch me with an alcohol,
Inside me you'll find a hole,
Quickly rub me with a rug,
Use the liquid in the mug.

One more thing you have to do,
Turn the hands that reach for you,
The answer lies within my birth,
That is all, you little twirp!

I think a few of the puzzles in this game were a little too obscure. I wandered around for ages before figuring out I had to X, and ditto for Y later on.

Decent Game. Artwork was very good. Music was good, even if it was lifted a bit liberally from Monkey Island. Puzzles were not too hard and handy hints are available on demand in the casual play mode. I did find the lack of voice acting a little poor in a game that was otherwise very well done. I imagine a very Zap Branniganish voice for the Kaptain would have pushed this game from decent to excellent. $10 seems a bit steep for the amount of gameplay. Not sure I'd pay another 10 for Chapter 2. Maybe it'll be included in the price for Ch. 1?

What about $6.99 at BigFishGames with an one hour trial. Going to try it out.

When you have finished these tasks, talk to Kralek to head to Jama Spacea.

Touch me with an alcohol,
Inside me you'll find a hole,
Quickly rub me with a rug,
Use the liquid in the mug.

One more thing you have to do,
Turn the hands that reach for you,
The answer lies within my birth,
That is all, you little twirp!