Brawe is back! Not long after the first episode of Kaptain Brawe: A Brawe New World was released, Episode II of the retro-styled adventure series hit and picked up where the original left off. It's more pointing and clicking, more humor, more epic red beards, and more smart puzzles, all for you, starving adventure game fan! 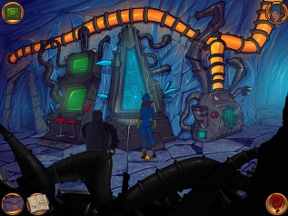 Kaptain Brawe: A Brawe New World - Episode II is, in addition to being a fine modern-day revival of a classic adventure game, a game with a mouthful of a title. You take on the role of Kaptain Brawe (and a few others), a space-loving police officer who, in Episode I, got into a little trouble. According to him, he followed every rule and regulation in the book as he rampantly destroyed a planet and stole a walking stick from an old man. According to everyone else, the man is off his rocker. So, to keep our hero in line, a watcher is assigned to keep track of him throughout the adventure. Not fun.

You'll spend much of your time playing other characters in this episode, but each one controls with the mouse in a manner any gamer will be familiar with. Slide the cursor around to interact with objects, to walk, and to speak with characters. Right clicking calls up your inventory, and you can use, inspect, or combine items from this handy little menu. Depending on which mode you choose at the beginning (casual or hard), the cursor will change depending on which action is best suited for an object.

And the rest of the game? It's difficult to discuss details without laying on the spoilers. Just know that this episode has more quests, conspiracies, plot twists and general wackiness than the first, and the continuation is so seamless, you won't be able to bat an eye in-between.

Analysis: What can you expect from Kaptain Brawe: Episode II? More of exactly what you had in Episode I, which is a good thing. Spectacular hand-drawn artwork is the most noticeable boon, but then the smart writing comes into play, introducing the game's subtle humor that will remind more than one gamer of the Monkey Island series. After that, the point-and-click gameplay takes control, allowing you to experience tons of dialogue and solve puzzles that are just to the left of completely logical. There's a good level of challenge to be had in this game. 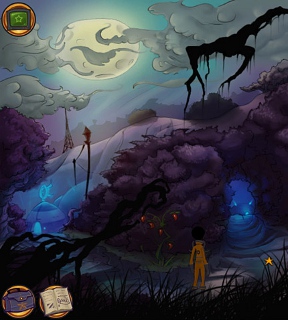 Setting Kaptian Brawe apart from the glut of other adventure games is its choice of modes available from the beginning: casual or hard. Casual is designed to give you an easier time, providing more cursor-based hints and less dialogue, while hard mode is for adventure gamers who are accustomed to the rigmarole the genre tends to offer. Choose either one you like, the game is great either way.

Have you played the first episode of Kaptain Brawe? You really should before you dive into this one. In fact, some online shops sell the series as one download. Sure, it's technically possible to play Episode II without touching the first, but then you'd miss out on all the cool in-jokes and references, and you don't want to be one of those people, do you?

Open the hatch, fix the saucer

Map of the lab at Schinkell 7.

An "episodic series" only two episodes long. Someone else will have to make a wisecrack about that, I'm all out of ideas.

I guess I could write a walkthrough for this if I were so inclined.

Open the hatch, fix the saucer

Map of the lab at Schinkell 7.

When Luna poses as she and she tries to cross the hall to get to the lab the guard stops her, and tells her no wandering around the complex, I tried going from the sewers then exiting the warehouse from the left door but she says she might get caught so she doesn't do it, I tried having her give the strong will report to Danny so he can do it but she doesn't let you, what should I do?