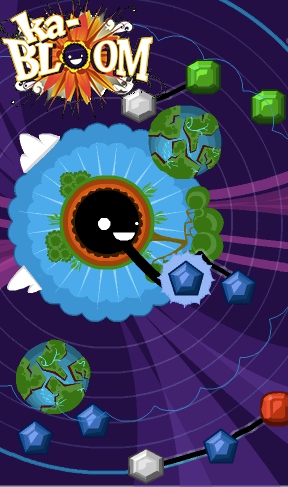 At first they only ate a few chains at a time. One galaxy fell. Then another. The Florets were always growing, always hungry, never satisfied. And I... I was held in their thrall, a slave to my desire to increase my score. Ka-Bloom is not a colorful, cheery chain-building puzzle game from Strongman Games. It is a nightmare wrapped in an enigma, a test of just how much one will neglect the repercussions of one's actions in pursuit of a meaningless ranking.

The goal of the game is to eat the galaxy! Well, sort of. You control a slumbering creature called a Floret, who needs to be awoken in order to consume everything she can to... Ka-Bloom! Feed your Floret by chaining together icons on screen for her eat in one long line when she awakes. Give her enough food, and you'll be rewarded with an adorable explosion, and proceed to the next level.

The game's first tutorial explains the basics of the game; use your mouse to draw links between gems by clicking and dragging; slash with the mouse to disconnect links you don't want; double-click on the Floret to wake her; use the mouse to control the Floret's arm and click to grab gems to drag into her gaping maw; blue gems grow, silver gems give XP; grow the outer boundary of the Floret to a fill line to beat the level. However, other techniques and more subtle details are left for tutorials in later galaxies or go unexplained altogether. The player has to figure out what exactly makes a high score, how the combo meter fills, and a number of other details.

Some of the aspects of the game that are available from the first level of the first galaxy (like hotlinking, where you click on gems that are on fire and drag to link the gem to another chain) are not explained until tutorials in later galaxies. It is definitely worth your while to play the tutorials in the later galaxies. Not only do they reveal new information, such as the functions of new gem colors (green temporarily expands the fill line, for example), but you also earn XP from silver gems eaten while playing them. 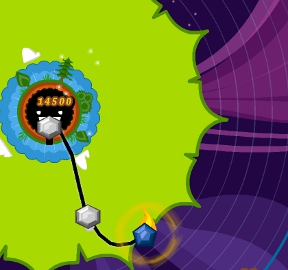 Analysis: The game offers no tips on strategy, so it's up to the player to figure it out by trial and error. On some levels it is possible to eat every single gem but do it in such a way that you leave yourself too small to conquer the level. On the other hand, if you greedily link and eat too many expanding gems too quickly, you may find the level is won way too fast, sometimes after the very first chain, and thus you've robbed yourself of possible XP. The XP is used to upgrade the combo meter, the number of chains you can have at a time, the radius of linking, and the time that the Floret spends asleep at the beginning of a level. Upgrading the Floret enables you to get a higher score for sure, but as far as I can tell every level is beatable with the basic Floret model, even in the highest levels, so you don't need to worry about having to grind.

This is a game that actually has a lot of strategy to it and it can be frustrating to feel that despite the bright colors and cheery synthesized soundtrack, you're completely in the dark as to the correct method. On the other hand, if you love puzzle games that you have to figure out yourself, and consider figuring out the rules to be part of the challenge, Ka-Bloom will certainly reward the effort, because once you do figure out all the minutiae it's a lot of fun. The upgrade system also gives the game great replay value, since you can return to earlier galaxies with your souped-up Floret and really clean up.

In any event, playing Ka-Bloom will ensure that when the floral monstrosities awaken from their millennial slumber, they will be pleased with you and eat you first. Viva les collaborateurs!

Update: The issue that some people have been reporting in the comments causing their browsers to crash has been fixed. If you experienced issues before playing Ka-Bloom, you might want to give this little gem another try!

Anyone else having this game crash their shockwave plugin on chrome?

Crashed in Firefox too.

It seemed OK so far. Stylish, but the first galaxy felt too easy, and it crashed before the second.

I've got an email in to the developer to find out if he has a fix for the issue you're seeing.

I don't believe it ever crashed on us during testing and writing up the review.

Crashing for me too, seems to happen whenever I get a new Yahoo instant message.

constantly crashes for me too

I played in Safari and Firefox (both on Mac) with no issues. Sorry to all those experiencing crashes! I know that's frustrating.

Crashed for me too, using the latest FireFox and Flash Player, multiple times

Sorry about the crashes folks, try using a different browser than Chrome or Firefox with Windows for now.

The developer is aware of the issue and is trying to come up with a fix for it.

It crashed Internet Explorer, too.

Hello, developer here! Thanks for the kind words, really glad to hear people like the game!

We've got lots of reports about crashes, and we suspect it's the Flash plug-in itself, because it's not the program halting (that'd result in an error message pointing to a code issue).

Interestingly, we never had trouble during development and the game is rock solid in the stand-alone player.

We're looking into it, however, and we've got a couple of suspects. I guess this will teach us a valuable lesson about building in patch facilities ...

The moral here is that it only works on Mac. haha.. but really, I like the game. At first it seemed a bit "easy" just eating everything, then it got a little bit harder each level to where you had to start thinking about what chains to make and what order to eat everything. A charming game to say the least.

I really, really, really wanted to play and like this game. I played 13 levels, hoping to get some more info as promised and dropped it. I understand if you want to introduce advanced mechanics later in the game, but for 13 levels it just felt like a mad click scramble with no point whatsoever.

I'm sad that I didnt 'get' the game, 'cause it seems like it has a lot of potential to be fun and challenging. I'm just not willing to put in 30 levels so that I can finally figure out what I'm doing.

I liked the game in the early levels, but found it became rapidly frustrating, not because I was "losing" but rather because I didn't really know what was going on.

When gems were left unchained/unlinked, sometimes they would explode on their own (if I grew too big and touched them?) but it wasn't clear if that was a good thing or a bad thing.

I wasn't sure if I could "lose" or not, or if it was just a race to combo a lot to get a higher score.

I think it might have actually been more fun if I'd had unlimited time to look at the board and decide what order I wanted to do things in. Instead, I just linked all of the obvious groups of 3 and hotlinked whenever I could. Apparently that was "good" in that I kept on getting ranked #20, #30, #40, etc. on the high score list, but it wasn't very satisfying. I barely had any time to figure out any elegant linkages or whatever.