Incredipede is here! Created by Colin Northway (Fantastic Contraption) and Sarah Northway (Rebuild) with art by Thomas Shahan, this gorgeous physics game feels like a vertebrate version of World of Goo with the building-centric gameplay of Fantastic Contraption (or maybe even Spore). Using the simple tools of legs and muscles, you must help Quozzle on her quest to find her family as she attempts to traverse terrain as twisted and diverse as you can imagine. How are you going to make it over the next hill? Maybe by attaching two dozen legs to Quozzle's eye and strapping them all together with muscles? Why not, let's give it a shot! 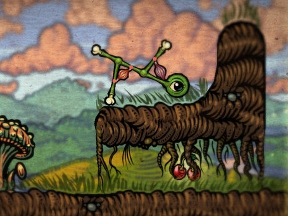 Use the mouse to click and drag bony limbs from the central core that is Quozzle. You can make them just about as long or short as you like, attaching legs to legs and making lopsided creations, realistic horse-like creatures, or functional wheel-things to your heart's content. Click on the pink nodes to attach muscles to the joints, then choose which direction you want the muscle to be activated. Using the [A] and [D] keys you control clockwise and counterclockwise movements, directing muscles to push or pull to move the legs and main body around.

Each level has a goal line marked on the far side, and the only requirement is that you make it there without falling to your doom. That's always easier said than done, of course, but when you factor in gathering a few pieces of fruit in the process, you might have a whole new challenge on your hands. 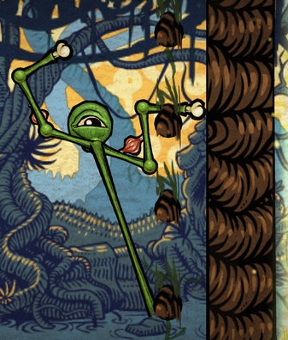 Analysis: Your first attempts at fashioning a functional Quozzle will probably look like something out of QWOP. Actually, who are we kidding? You'll build wonky contraptions throughout the game. The key is to match your contraption to the terrain, thinking about levers and movement as you draw out legs and map out muscle patterns. You don't get a lot of fine control over the machine, but with some practice you can perform some amazing feats of engineering. You don't have to build a symmetrical being, nor does it have to look pretty. As long as you can get from start to finish you can call it a win!

User-created levels and creatures are a big part of the Incredipede experience, and the game gives you the tools to both craft and share just about anything you make. A simple level/creature browser lets you sift through user submissions and play as many stages as you dare. Better yet, you can get a copy/paste URL to share with your fellow humans outside of the game.

It looks and sounds beautiful, and Incredipede is extremely easy to start playing. The learning curve is a little steep, however, and even though you can make and move creatures right from the start, fashioning something that works is an entirely different story. It's an unusual and often complex thing to envision muscle movements and how they'll rock your creature around the stage, but a little time and some patience are all that's needed to turn you into Quozzle's best friend.

Sixty levels are included in Incredipede's main game, and that's plenty to keep you busy for several days at the very least. Beating the stages isn't where the long lasting fun comes from, of course. The real meat is in making your own levels, playing user-generated stages, and turning yourself into a creature-crafting master. There's a lot to love in this simple but challenging game!

Had the pleasure of playing a working build of this game at PAX. Sarah actually was hesitant of letting people play because she wasn't 'happy with it' but wow! Can't wait to play the finished product!

Wow, this looks really great!
I hope it gets through Steam's Greenlight. And I wonder if they are considering releasing Android version of this game :)

I'm running Chrome which has Flash updated to 11.4 but I'm getting a message that Flash is missing or out of date and that the browser versions requires 11.3 or above. I've restarted Chrome and I'm still getting that message.

The demo is pretty fun! very creative concept. 15 dollars isn't a whole lot of money but it's enough so that I can't buy this immediately on an impulse :P

I played before reading your review and I immediately recognized the rotor icons from fantastic contraption, wondering if this was from the same developer.

this is so gorgeously made & so gorgeously illustrated i can only wish that it were just a bit--just a smidge--easier to maneuver. it's obviously a five star game anyway, the innovation & the thought behind it is almost ridiculously beyond most games. no question. my real & single caveat is that it's actually painful to watch the poor creature try & move when it's so difficult.

oh heavens. i'm sure when i will buy this game, might take me a couple of weeks, but i believe in promoting real artistry wherever i may find it--& it's definitely here. just maybe the next installment make it so one doesnt feel like one is forcing something to do just basic activity that hurts?