A little boy has somehow gotten himself trapped in an underground room, with no clear way of escape readily apparent. The room - a large one, if you want to call it that - looks like a discombobulated entanglement of a subway station, the Sistine chapel, gothic architecture, and of course, scattered rubbish taunting laying in wake of several would-be escape route. Despite your attempts to question the boy as to his surrealistic surroundings, how he might have gotten there, or whether he has any ideas on how he can exit, the boy seems to know but one thing for certain - he wants out!

I Want Out! is a throwback to retro pixel art games of decades past, integrating the best of nostalgia with more modern special effects. The control scheme is also based on that with a nine-button type interface to select actions which can be performed on the environment. I'm not sure it was the best choice of mechanic for this particular game, but I'll comment more on that later. The graphics may encompass only one room and a couple short cutscenes along with miscellaneous items that appear at certain stages, but are nonetheless rather impressive and capture the immersion quite nicely. 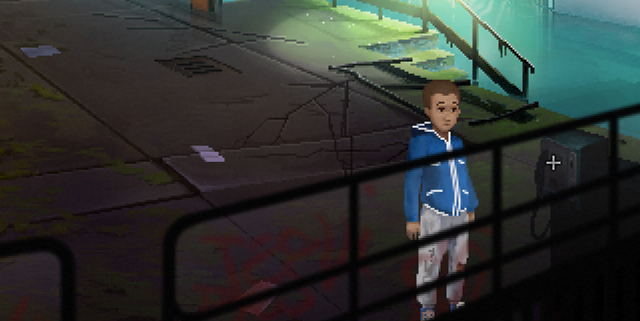 As you work through the scene, you'll uncover objects to help you in your quest to find a way out. Sometimes these can be a bit tricky, and you'll have to not only find an object, but have the additional hurdle of finding which option or other object to use on it to progress. You can chat with the boy for hints, but be aware you won't be spoonfed - he'll offer somewhat vague pieces of advice. They probably won't be terribly enlightening unless you are a newcomer to the point-and-click genre as most of the challenge lies in executing the steps rather than figuring out the concept of what should be done.

Progressing more deeply and uncovering things, the surreal scene you first unearthed seems no less suspicious than at first glance. The flicker of an electric lamp, the almost-lifelike expression on an ancient statue, the spiders creepy-crawling up your arms from the stone floor...okay, I may have taken the liberty of inventing one of those! When every little thing - even a loosely bolted-on exit sign or a stick of gum with no visible expiration date - becomes an asset, it leaves little wiggle room for the faint of stomach. Remarkably, though, the boy does have a strange aversion to water, whether it be wading it or, heaven forbid, swimming in it.

It seems there might be something behind that statue. Or is it a dead end, like throwing the rope up to the hole in the ceiling? Or trying to get the key out of a locked door through the most inventive of methods? Maybe phoning for help? Or throwing a stick of dynamite at anything that might explode...wait a minute, are you really going to give LIT DYNAMITE to a child?!

When you do finally start stringing together successes instead of dead ends, you begin to get on a roll. Again making wise use of your surroundings even when it may not seem readily apparent can take you a long way, as you will soon see. My favorite part of I Want Out! was most definitely the ending and the surprising twist at the end. It's a bit of a pity because I can't say much about it without spoiling the entire title for you, but I'll just leave it at saying that it is hinted towards in strange and satisfactorily subtle ways throughout the dialogue and the game.

I admire the art style of the author, though it is mostly contained in one room and leaves a few elements "off-screen," so to speak, as the main character is rummaging for something slightly out of sight. The walking animation was smooth and accompanying sound effects added a very nice touch. Not many games pay such attention to detail. For example, in walking over different surfaces (stone, metal, plank) different sound effects are played accordingly. There are small animations for many of the actions, from bending to pick up something, to reaching in to tinker with something else, to pulling out wires or climbing on various objects. All of this adds to a great sense of immersion and identifying with the character, a little boy we are following, trying to help.

There were a few points as well that I thought might merit some further thought and consideration. As I mentioned in the beginning, the controls for performing actions by the main character is a nine-button interface, by which you select one of nine actions ("use," "pull," "push," etc.) and then click on something in the ambient atmosphere or on some item that you already have. I suppose the author may have some affection/nostalgia for this type of setup from the old days - and perhaps I am just not used to it - but it did not seem to do this game any favors. In fact, it just became more clunky and created more work in the form of trying many actions on one particular spot in hopes of hitting the correct one. There were keyboard shortcuts for the actions, but those used the letter keys. Though fine for me, on non-QWERTY keyboards the symmetry would break and keeping track of the keyboard shortcuts a fruitless endeavor. Number keys might have been a better choice. Often which action to pick drew down to semantics of whether one word is better than another to describe what you want to do. Granted, some of these were taken care of nicely, with enough of a prompt to suggest trying another action - but some of them were far less clear. Other times it was not clear that a different action was needed before using an item. For the life of me I could not figure out that we needed to use a stick of gum, which appeared as half-open, maybe used, on the boy to get him to chew it to make it more sticky.

Controls for the game are explained in-game in further detail, but the gist of it is fairly simple. Right-click on the area to walk around, and left-click to inspect things. Select an action, either from the bottom-left panel by clicking on it, or via keyboard controls, then click on something to attempt to perform that action on the desired object. In the bottom-right part of the interface, you will find your inventory, which houses objects that you have collected throughout your adventure. In the top-right corner, whilst you have your inventory/actions screen pulled up, you'll see a percentage indicator of your current progress through the game. That pretty much covers the important stuff, so all that's left is for you to give it a try. If escape point-and-click games are your forte, I'm sure this is one you won't want out of as quickly as the little boy who seems to be in a bit of an impatient hurry!

Thanks Arceus for this review!

It's a bit weird to see a review of your own game... but I guess you get used to it :)
I'm glad you mostly liked it.
I take every criticism with great pleasure since it's our first game and we are eager to improve ourselves doing this.
The 9-verb interface was our initial choice but we may create a new version with a more modern interface...

There's something about the I_want_out!.exe file that Avast doesn't like and it automatically deletes the file when you try to run it. But I disabled Avast for a bit to try the game.

I also dislike the nine-button interface. It's like there are too many choices and as the review stated it's not always obvious which one should be used. For example I try to "Use" the elevator and he says he doesn't know how to use it. Really? Instead you have to "push" the elevator button. That's pretty unnecessarily complicated. Also I think it would be better if he just automatically picked up objects that you find. Everyone knows in a point and click game you want to pick up EVERYTHING, so why make us "look" and then "pick up" in separate actions?

Anyway, the game seemed promising and I only played for like 10 minutes before Avast came back online and shut the game down. But I don't know how much longer I would have lasted anyway with the awkward interface. Which i a shame because the animation and ambiance are great and I am really curious about the ending.

Avast detection is sadly a known issue for games created with the software I used to make I Want Out!. I don't know how it can be fixed since the software developer doesn't know either...

I understand. I reported it to Avast as a false alarm anyway so I guess there is a possibility they will review it and fix something.

I modified some things and I uploaded a new version which hopefully doesn't trigger the Avast detection.

I'm sorry, it still triggers Avast. I understand that it may not be your fault and is probably something stupid with Avast.

Crap... As I don't use Avast, I tested it with an online scanner (virustotal). The previous version (1.1.1) was indeed detected. The new one (1.1.1b) was not... I guess the realtime scanner detects things differently...
So, for now, I don't know what to do...
Thanks anyway for your feedback.

Well I was able to play the game from beginning to end and I absolutely loved it! I scored 97% making me wonder what I missed.....?

Whew, finally got around to playing this challenging yet charming puzzle! I got 97% on my first attempt too, but on a fresh playthrough I managed to find the dead end that I missed (without using the author's walkthrough).

In my case, I hadn't used dynamite on the brick wall.