"I Object?!" Nobody ever really expects to hear that at a wedding outside of cheesy rom-coms, but in this short free indie adventure from Indrah, MakioKuta (April Was a Fool), and Racheal, the Dark Lord's son has gone off to elope with his true love, and as an iron-fisted overlord, naturally this disrespect cannot stand. Sasha, Nikka, and Dimitri are sent to bring the lovesick lad back home, but they're, um... not exactly tactful. Or stealthy. Or... well, let's just say I'm sure they have other talents outside of crashing weddings. But there's a magical barrier keeping them from their task, so our intrepid trio will need to scour the castle for a means to bring it down. Use the [arrow] keys to move, the [spacebar] to interact, and [ESC] to open the menu where you can save the game. It's a gleefully silly, funny little adventure that definitely deserves your RSVP. 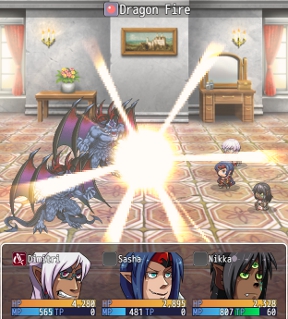 Demons and humans have very little in common, and our three "heroes" can't fathom why their prince would bother to marry a (smelly but pretty) human woman, which is largely why his father sent them to bring him back home. A lot of the comedy as you explore the castle comes from interacting with things (seriously, examine everything) and the prince's loyal but bemused monster servants, observing the culture clash between human and demon. Death Knights toil in the kitchen to create the perfect wedding feast, skeletons desperately try to figure out what they'd look like with skin to make decorative sculptures, and Sasha bemoans the smelly weirdness of humans in general while Dimitri extols the virtues of the burrito. It's a very tongue-in-cheek game, lifted up by excellent writing and a lovably weird main cast. While most turn-based RPG battles are optional, getting to play around with a group who all have ridiculously powerful abilities is a lot of fun, though you'll need to strategize since the enemies tend to be strong as well. There are some mandatory encounters, so save often and experiment with each character's spells and skills. I Object?! is one of those quirky games that's a pure pleasure from start to finish, one that revels in its concept and draws great comedy from it. I Object?! is great fun wrapped up in one colourful package, making it an easy recommendation if you have an afternoon to spare, and we can definitely say we hope we see a lot more from Nikka, Sasha, and Dimitri in the future.

Does anyone know where I can find out the name of the bride?

What so the best puzzles have in common? Oh yeah. They combine a code and a list and a reversal. Or is it a lasrever?

...I think you guys may have forgotten one of the platforms :P

9. Defeat the dragon and go back to the main hall.
10. Go inside the right door on the second floor.
11. Proceed forward until you reach the last room of the library
12. Next to the flower in the top left corner, you’ll find a shelf that requires a password. The hints can be found in this room. The password is

13. Take the rings and unlock the sealed door in the main hall.
14. Defeat the prince.