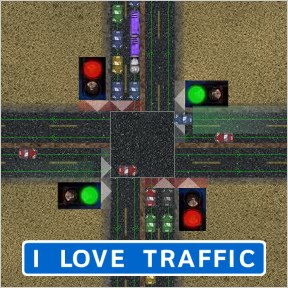 John Cooney (Achievement Unlocked, Grid16) brings us a cheerfully nihilistic look at traffic, in the form of a fast-paced, fun little reflex-tester. Click on the stop-lights to switch them on or off, allowing cars, buses, and semi-trailers to pass through intersections safely. Each level asks you to pass a certain number of vehicles within a certain amount of time. As the game moves forward, you'll have to deal with more lanes of traffic, more complex traffic patterns, and stricter time limits. Can you beat all 20 levels, oh Invisible Sky-bound Weaver of the Woof and Warp of Interlocking Automobiles? Or will the jabbering banjo music drive you insane first?

Analysis: I Love Traffic is not a game about people. It's a game about cars. It says so right on the main menu screen, and it's utterly true. The drivers of these vehicles have no control over themselves — they just drive right into the middle of the intersection when they see the green light, as though you threw a big bag of automobile catnip out there.

"You caused an accident!" the game tells you, as the cars collide, leaving entertaining skid tracks all over the highway. And you did. The second these tiny, digital drivers got in front of their virtual dashboards, they were doomed, their decision-making skills silenced by the purr of the engine, their fate entirely in the hands of the traffic gods. That's you. And you murdered them.

The message? Don't be like them, when you're behind the wheel. As my openly hostile driving instructor once told me about intersections, "Always look both ways! First you get hit from the left! Then you get hit from the right! You're a punk, and you're gonna get killed." Then he got me in a choke-hold and demanded to know the location of the emergency flares. Mr. Shipler would have loved this game.

Fairly short game. you can redo a level quickly and each level is only a few seconds long. But very fun. One glitch, although it helped me win, is that you can get a car or truck through your red light, meet your quota, and then the car immediately gets wrecked but doesn't affect you moving on.

Oh my goodness.... the music is terrible! A progression based game like this should really have a cool new song switch for each level, to give it a different feel. It is just too much of the same as it is now.

New wave of an old concept, not very aesthetically pleasing, music is in poor choice, short in length, and the glitch mentioned above happened to me in more than half the levels.

Only good thing is the "fun" facts. I expect more from Armor.

As opposed to the recent comments that are a tad down on the game, I kind of liked it. Granted, the music is annoying, and the levels are a bit simplistic in design, but that's what I like. Well, about the design anyway, not the music. The simple layout doesn't distract from the point of the game, which is to get the tiny vehicles across the road.

Despite the interesting, short play experience, there were three gripes I had.

1. the facts looped too often. I got the same three level-end facts throughout the game, but I suspect there must be more.

2. Often times one just had to turn all lights green and sit back. I must have completed over half the levels this way. The vehicles are either randomized so well that collision doesn't happen often, or the quota was so short the strategy of changing lights became unnecessary.

3. Level 19 is plainly unfair. In the end, this level more than any other falls purely upon luck. There is no traffic light signal at the middle intersection, which seems to imply strategy, but in reality, by the time you see the vehicle coming, the passing cars are already beyond the first traffic light. Additionally, stopping the lights isn't feasible on this level, as you must get 40 cars across in 30 seconds and the passing cars seem to come in too few a number to think creatively.

Just turn the lights green and hope for the best.

As for the "glitch" mentioned earlier, I wouldn't really call it that, as it seems to imply a flaw or unexpected tool. Kind of like brawling games, as long as you meet your quota, it doesn't matter if horrific carnage ensues afterward.

I believe on some roads (in particular, like the middle road in level 19), there can only be one car on it at a time. So the trick is to not send cars when the road is completely clear, since, as you noticed, a car can show up late and still hit the cars on the east/west road. The trick is to send your cars when you see one on the middle road and time it so that the one on the middle road passes the intersection a little before the east/west cars get there. The exact timing for that intersection is not crucial at all - seems like if you can see the middle-road car anywhere near the intersection at all when you let your cars through, it works just fine.

Blah. It was okay. jmtb02 has done a much better game, the achievement unlocked one. This one felt like more of a bad minigame. I guess it's supposed to be a bit frantic, but I too didn't see much strategy or logic involved either.

I like this game. I thought the design for the last level was nice. I'd like to see levels that require more cars and that feature more traffic lights; but has less constraint on time. For the sequel, I'd like to see curved roads.

Even with all the problems...

the accidents made me giggle.

I'd rather have keys mapped to traffic lights instead of having to go back and forth with the mouse all the time. Additionally, the game seems to be just a bit too luck-based, especially on higher levels when it also gets a bit repetitive so it's rather hard to keep the amusement factor up.

Cool little game, excellent for a quick go - doesn't out stay its welcome and 20 levels is just about right I'd say.

It feels like there is an element of luck on some levels but remember you only need a certain amount of cars so you can use that to your advantage to help you through. e.g. on level 20:

You will have too much traffic backed up if you let the queues on the right hand side go off the screen.

So leave the first two lights to collect cars and just alternatively let the last three sets of cars go when its safe.

Once the first two lights are stacked go back and let them go - you'll have collected all the cars you need before you have to worry about the right-hand lights again.

I love it! But definitely agree about the keyboard controls. Sometimes you just can't click multiple lights fast enough.

Well, I don't think it's just set all lights green and do nothing.

Some strategies for levels:

Level 9: Hardest on the early levels. Often not manage to change back to red in time (collision) or not giving green in time (clog up traffic)
Level 16: Should leave the latter two lights on (it's typically one 3-lane road crossing it);
Level 18: Same for the beginning, but can't do that for the whole time as more lanes are present.
Level 20: Green all at the beginning, only red out one-by-one when the first vehicle approaches, but the rightmost lanes should be green most of the time.

1. Container trucks (or "Semi") must be let through ASAP!
2. I believe collisions after completing a level would count in the end-game statistics. Anyone had tested that?

Everyone complains about the music, but I'm dying to know the title of the song used! It's what kept me going through the entire game, gives you nice rhythm :) So if anyone knows it, I'd appreciate it ^^