You will never find a more wretched hive of scum and villainy. Of course, I'm talking about the Candy Planet, and I Hate Candy. Or at least, the sullen mercenary hero of Cup of Fun's platforming shooter does, so it's bad luck for him that he's been sent to the sugary sweet world to rescue a bunch of scientists. Seems like candy might just hate him back, too, since the world is full of stuffed animals waiting to pelt him with the stuff, walls covered in sticky-sweet goo that make it impossible for him to climb, bottomless pits... not exactly a warm welcome. Use the [arrow] keys to move and hold [spacebar] to fire, keeping an eye on the temperature meter in the upper left corner so you don't overheat. Your goal is to find and rescue the scientist in each stage, blasting any toddling toys in your way and... uh... nabbing their souls for upgrades, which isn't creepy at all. You'll automatically grab onto and hang from any wall you jump against unless it's covered in slippery goop, so make sure to explore every part of each level to find all the power-ups and secrets. 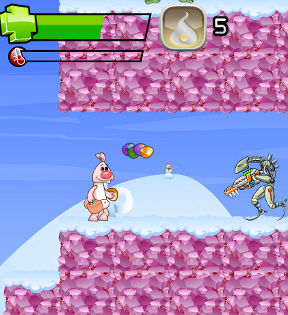 Provided you don't find the idea of gunning down toys that actually seem to think they're doing you a favour by showering you with painful treats, there's something delightfully weird about the whole tongue-in-cheek premise, and the great design doesn't hurt either. The spiteful, grudging tone of the alien hero and the gleefully oblivious toy enemies clash in a great way It feels like a few minor tweaks would really have gone a long way towards making the game a lot smoother, however. A map to keep track of where you are in the enormous levels, for instance, and a bit more variety in the environments, which sadly wind up mostly looking and playing the same apart from a few minor style changes. Still, I Hate Candy is one of those games with such a great style and sardonic charm that it's still worth checking out. A remarkable amount of work has clearly gone into it, and though it's begging for a more fleshed out sequel, I Hate Candy is a fun, snarky platformer with a lot of levels to explore and blast through.

Does this game lag, or is it my PC?

No it does not lag. Excellent game btw.

No lag here too.
Funny game, I love the voice on the bears lol. A little boring though, I forced myself to play at least until I die once and I was resisting not throwing myself at bottomless pits.

Work your way to the very top of the level as soon as it starts, and then over to the left. You should pass an area with several power-ups visible buried within the ground. Past that you'll find a platform with a sign and a red mushroom. Hop on the mushroom and keep bouncing until you reach the portal in the sky. Proceed to the right from where it releases you to find the scientist you need to free to win.

There may be other ways to get there, but that's how I did it.

At level 4 you must find the mushroom at the left top corner of the level, jump on it, and get to the portal above this mushroom. :)

Thanks, Ilya, Dora answered my question over an hour before you and used the spoiler tags.

I got to level 7 or so and just quit, it stopped being fun. Rather, it never was a lot of fun, I just stopped hoping it would become so.

I just wish it were either possible to duck or that the armor upgrade were cheaper, because I am taking way too many lumps from these baddies. I keep getting wiped out too fast.

I also wish there were some way I could hit enemies that are standing too close to shoot (which tends to happen with narrow platforms) or collect the souls of enemies I missed on earlier playthroughs of levels.

I'm not badmouthing the game or anything, it's just pretty tough.

No ducking or good shooting control. No explanation on upgrades. Uninspired levels. I bored-quit at level 4-5.

There seems to be an imbalance in this game - the default weapon isn't strong enough to comfortably deal with the lowest level of bad guys. I'm not expecting for one shot to kill them, but if it takes 10-15 shots to kill them, and they can kill you with 4-5 shots, that seems like it should break some sort of game designer ethics code (to me, at least).

I gave it until level 5, then gave up. I wanted to like it, just couldn't manage to pull it off.

You can buy the light saber upgrade to insta-kill everything that is 1 meter close to you ;)