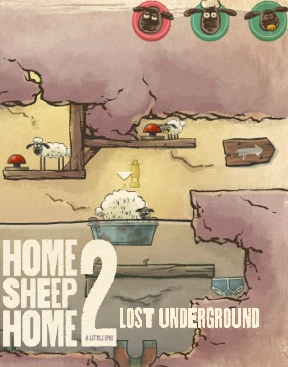 Shaun and his friends just can't keep out of trouble. Normally that wouldn't be a problem, since typical sheep "trouble" usually consists of being extra smelly one day, or getting stuck inside a fence upside-down and backwards... somehow. Sheep are only slightly smarter than your average reality TV show star. But where Shaun's concerned, the trouble's a little bit bigger, and in Aardman's physics puzzle platformer Home Sheep Home 2: Lost Underground, the flock winds up sub terra after they take a tumble in their eternal quest for laundry. And adventure, I guess, but they do have that weird fixation with underpants and socks. Hey, I respect their life choices.

Use the [WASD] or [arrow] keys to move, and the [1], [2], and [3] keys to switch between sheep. You need to get all three of them to the exit at the end of each level in order to proceed, but since each sheep weighs differently, you'll need to make them all work together. Shaun is of average size and is unusually spry, but though Shirley's bigger bulk means she can push heavy objects, it also means she'll sink and can't jump as high, and tiny Timmy can swim and run like Shaun, as well as fit into small spaces, but his little legs won't let him jump high either. With water as a new obstacle to overcome, as well as explosions, our little flock has more challenges in front of them than ever before. And underpants to collect. I wasn't kidding. Shaun, do you need to talk to someone?

Like its predecessor, Lost Underground is an absolutely gorgeous little game that has the sort of signature charm and character you don't usually get out of a physics puzzle. The little animations and sounds bring Shaun, Shirley and Timmy to life, and the level design allows for some great creative puzzles. Unfortunately, slogging about underground just isn't that visually interesting, and water dripping makes for a, uh, well, no real soundtrack at all really. But even without a lot of fizzing whizbangs going off in the background and a musical score directed by Jack Black, there's no denying a Shaun the Sheep game is usually a cut above the rest, and Lost Underground is no exception. With fifteen clever spelunking stages and some interesting new mechanics, it brings enough to the table to keep things fresh without shearing your beloved sheep into something you don't recognise. Fluffy fun all around, especially if you like gathering up socks and underoos that have been mouldering underground for who knows how long.

That wasn't as good as the other Home Sheep Home games, in my opinion. Far too much

mechanics (you can tell how far I got before giving up).

finally got achievement for level 6 with tnt to spare.

shirley(the biggest sheep) will be activating the tnt, while shaun with timmy(smallest) on top go up first. use key 2 to move shaun to get them both to the ledge. shaun pushes down the tnt from top to shirley. as long as it doesn't land sideways, you're good to get shirley up solo.

any tips for the only use 2 parachutes achievement? haven't figured that one out and am stumped.

1mindy.gee, for the 2 parachutes achievement:

First, get Shaun (the medium sheep) to the far right rock to collect that parachute. Jump off the rock so your parachute deploys. Next, have Shirley (the biggest sheep) collect the falling parachute above her. Jump off the rock. (It works best if you jump of the right-hand side; otherwise you might get trapped by the rock coming back up.) When Shirley comes back on screen, have Timmy (the smallest sheep) jump on her back.