Claire's been having a rough time of it lately. She's been having strange episodes that are making her question her sanity and leaving her unable to focus on her job. A visit to her aunt in Savannah should net her some much needed rest... and TERROR! *70s horror movie keyboard soundtrack* ... okay, so maybe Hidden Mysteries: Vampire Secrets isn't all that scary. At all. But what it is, is an extremely well made point-and-click/hidden-object hybrid that will take you from a quiet little house in the suburbs all the way to a dungeon in a remote castle. Sounds like my kind of night! 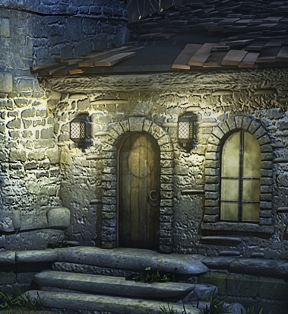 Sparkles indicated a hidden-object scene, and the cursor will change to show you places you can interact with, or items you can pick up. If you get stuck, during normal exploration clicking on "tips" in the lower right corner will briefly mark every place on screen you can interact with. In each hidden-object scene, Claire finds items she needs to use to proceed, but occasionally, she finds books as well. Stored in their own page of your inventory, books may appear to be unrelated to your quest, but actually contain clues you'll need to use to solve certain puzzles.

Analysis: Considering the word "vampire" is right there in the title, it feels a little silly for Hidden Mysteries: Vampire Secrets to spent three-quarters of the game being coy about what's really going on in Savannah. Of course, the word "mystery" is in the title as well, so Claire has to travel around gathering clues, and at least in this respect the game is very good at making you feel like you really are unraveling something. (Even if it should be immediately obvious that the answer to everything is "VAMPIRES, duh.") While the character models tend to be a little bland, featuring a disconcerting thousand-yard-stare that seems to come with that sort of design, the environments themselves are beautiful, and made all the more atmospheric by a soundtrack that relies on ambient noise as well as music to bring you in. 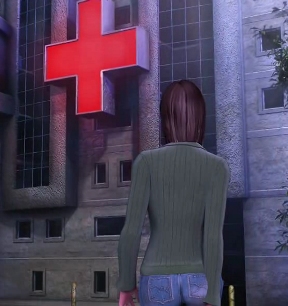 But what's really remarkable about the game, at least for one of its genre, is that none of the hidden-object scenes are ever repeated. The game moves from location to location fairly quickly, and not once does it ever force you to backtrack to a hidden-object scene you've already solved; each one you'll encounter is unique, and only seen once. It's an extremely tightly designed little game in that regard, and it's nice to feel like not only is it not wasting your time, but the developers put a lot of work into it.

The puzzles, unfortunately, are a bit of a mixed bag, where the contents are either "tricky but uninspired" or "meh". If you're paying any attention to your surroundings, chances are you'll spot clues to puzzle solutions every where you look. You'll probably spend between three and four hours of the game, but it could have been longer if the puzzles themselves were more involved, or just more challenging. You'll find yourself sprinting through the game fairly quickly, and while this helps the narrative move along, it also means you won't get that feeling of slow dread the game is trying so hard in places to convey.

In the end, what holds the game back from being really great is just an unfortunate lack of originality. Heck, it even feels the need to squeeze some awkward undead flirtation in the last half hour or so. It also ends rather abruptly, leaving a lot of plot points unanswered, or even mentioned; The result is a very atmospheric and solid little title that could have been a lot better than it is, but is still pretty good despite everything. Although it doesn't pull out any new surprises, Hidden Mysteries: Vampire Secrets is well made, and offers up a nice evening's worth of object hunting and puzzle solving through a wide variety of locations.

Congratulations! You have escaped the Castle and completed Hidden Mysteries: Vampire Secrets.

Congratulations! You have escaped the Castle and completed Hidden Mysteries: Vampire Secrets.